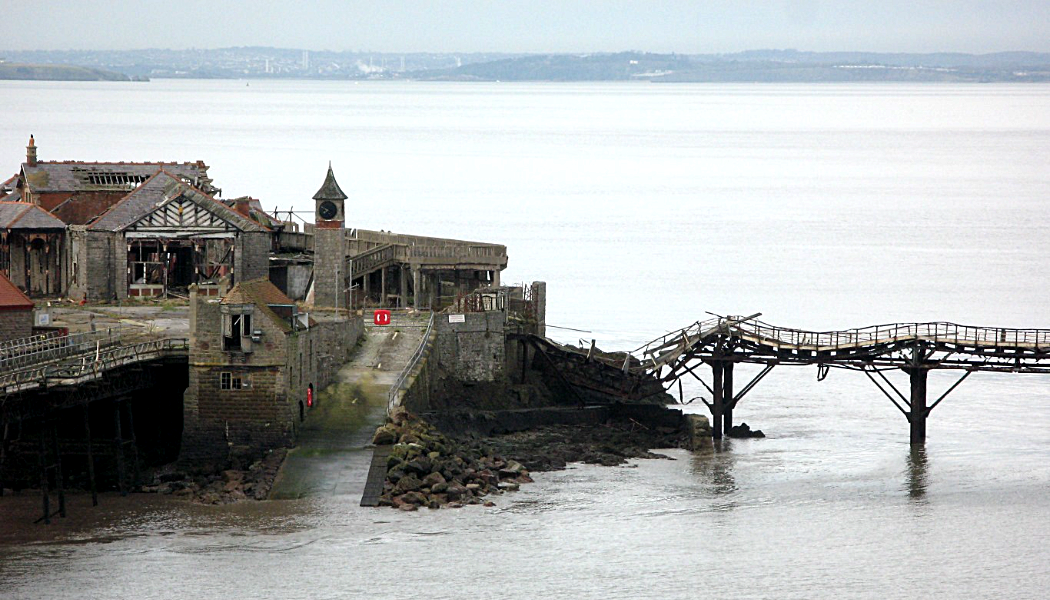 £3.55m to save heritage Weston-super-Mare pier from total collapse

The legs and walkway of the pier will be repaired, allowing access to a small island housing an RNLI station

Birnbeck Pier, on the coast of Weston-super-Mare, is to be saved from collapse following multi-million pound funding from the National Heritage Memorial Fund.

The Pier closed in 1994 and was placed on the Heritage at Risk Register in 1999.

First opened in 1867, the pier played a role in the Second World War as a weapons testing site, and later allowed the RNLI to set up a lifeboat station on Birnbeck Island in 1882.

The RNLI was forced to leave its island station at the end of the pier in 2014 as the pier became too dangerous to walk across.

Deterioration, accelerated by stretched resources during the pandemic, had left the Grade II* listed pier in grave danger of collapsing into the sea.

Now, following £3.55m funding from the National Heritage Memorial Fund (NHMF), North Somerset Council and the RNLI, the pier’s fortunes may be reversed.

The capital will be used to stabilise the legs of the pier, and its walkway is to be restored. Once complete, it will once again provide access to Birnbeck Island.

North Somerset Council plans to regenerate the island for the benefit of the community after the restoration, and the RNLI will then pursue its ambition of re-establishing a life-saving facility there.

The funding is part of a £20m government covid-support pot, which will be used for repairs and restoration, new maintenance and utility systems, surveys and investigations, collections preservation and business planning.

It comes from the government’s Cultural Assets Fund, which NHMF has distributed as part of its wider £40m COVID-19 Respond Fund. Total funding for a total of eleven projects comes to just over £21m, which has included a top up from NHMF’s own funds.

Funding for England from the COVID-19 Response Fund has now all been awarded. However, grants are being awarded to significant heritage in Scotland, Wales and Northern Ireland until the end of March 2023.

Two boats in the National Historic Fleet – Steamship Shieldhall in Southampton and the Vigilance of Brixham – will undergo critical repairs so they can continue to sail, while north east-based tank engine ‘Joem’ – the last locomotive of its class – will have its boiler overhauled.

Urgent conservation works will be undertaken at eight Grade I and II* listed chapels across England, all on the Heritage at Risk Register, before Historic Chapels Trust finds them suitable long-term owners.

A number of Scheduled Monuments are set to benefit. Torre Abbey in Devon will undergo emergency repairs, and structural investigations and surveys will be undertaken at Hurst Castle in Hampshire. Five Scheduled Monuments at Ironbridge in Shropshire – the ‘birthplace of the Industrial Revolution’ – will be safeguarded alongside a further 30 Listed buildings.

Urgent conservation will take place at the Grade I listed Gunpowder Incorporating Mill ‘L157’ at Waltham Abbey Royal Gunpowder Mills, and Macclesfield Museum’s Paradise Mill, Old Sunday School and Silk Museum will be repaired and upgraded so they can better care for collections.

Dr Simon Thurley CBE, Chair of the National Heritage Memorial Fund, said: “I am thrilled to announce our funding for the future of Birnbeck Pier which will support the RNLI and North Somerset Council in their mission to bring this hugely important heritage site back into beneficial use.

“We’re extremely proud to have administered £20m of government funding for some of England’s incredible heritage sites and assets – from historic ships and locomotives to castles and chapels – helping them to mitigate the impacts of the pandemic.”