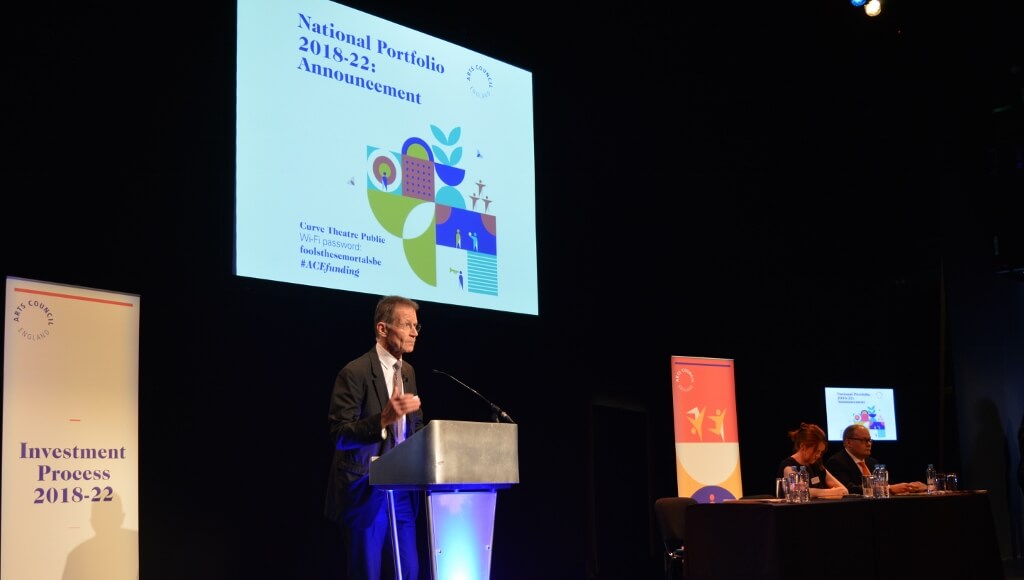 Arts Council England (ACE) the National Development Agency for museums, arts and libraries has today announced the allocation of a budget of £409 million between 2018-22, which includes £341 million of grant-in-aid and £68 million of National Lottery funding

72 agreements with 66 museums, which increases more than threefold on the number of 21 MPMs (of which nine were museum development providers) in the previous funding round from 2015-2018

Today marked a milestone in ACE Funding as it announced its National Portfolio at the Curve Theatre in Leicester, the first to be integrated between museums, the arts and libraries.

There are 183 new entrants in ACE’s National Portfolio of Organisations who will receive funding over four years bringing the total to 831 cultural organisations. In the previous round there were 663 art organisations sharing a £1 billion pot from April 2015 to March 2018.

For the first time, 72 agreements with 66 museums and an additional seven libraries will be part of the National Portfolio including new NPOs such as ss Great Britain, which has been awarded £844,000 over four years and will open its new Being Brunel museum next year. Other new additions include Woodhorn Museum, which has been awarded £800,000, Nottingham City Museums and Galleries £1.9m and The Story Museum in Oxford £700,000.

Hedley Swain, acting director for museums at the Arts Council told Advisor that today’s announcement was an important step for the body as it could for the first time ‘talk seriously about supporting the entire English museum sector’.

“For ACE it’s really important as for the first time we are fully integrated,” he said. “It’s also important for the museum sector and the people of England. There is more money being allocated to regional museums and a wider distribution of investment.” Swain mentioned rural areas such as Newmarket in Suffolk that would benefit from the funds and that he said had been difficult to invest in in the past.

“We have not only widened the range of museums but also included different kinds of museums. We can now talk seriously for the first time about supporting the entire museum sector. At ACE we often think of investment through different places and we feel we are giving a better return to the tax payers and lottery players.”

The National Portfolio is made up of three bands, Band 1: £40k- £250K, Band 2: £250k – £1m, and Band 3: over £1m. Those who receive less funding will see their administrative burden reduced, and those who receive the most investment, will be required to do more to contribute to all five of the Arts Council’s goals (excellence; access for all; a resilient and sustainable sector; a diverse and skilled workforce, and high quality cultural engagement for children and young people), to drive diversity, nurture talent, and to play a key role in supporting the wider sector.

It means an increase of £37 million per year on the previous investment period (2015-18) will be used to help support the ACE’s ambition of achieving a four per cent uplift in the proportion of the NPO budget spent outside London; support the integration of museums and libraries, for arts and museums’ activity into its portfolio; and bring new, small and diverse organisations into the portfolio.

“This is a groundbreaking portfolio that is going to energise the whole sector and is going to disrupt, challenge and change people’s lives,” said Nicholas Serota, Chair of Arts Council England.

The National Portfolio, which is made up of organisations receiving regular funding from ACE with the aim of spreading funds across England and bringing in new smaller, diverse organisations is one of three ACE funding streams. The other two are Grants for Arts and Culture (Jan 2018) a rolling fund for individuals and organisations to support thousands of individual artists and communities and cultural organisations, and Strategic Funds to support the sector bringing arts and culture to places with low engagement.