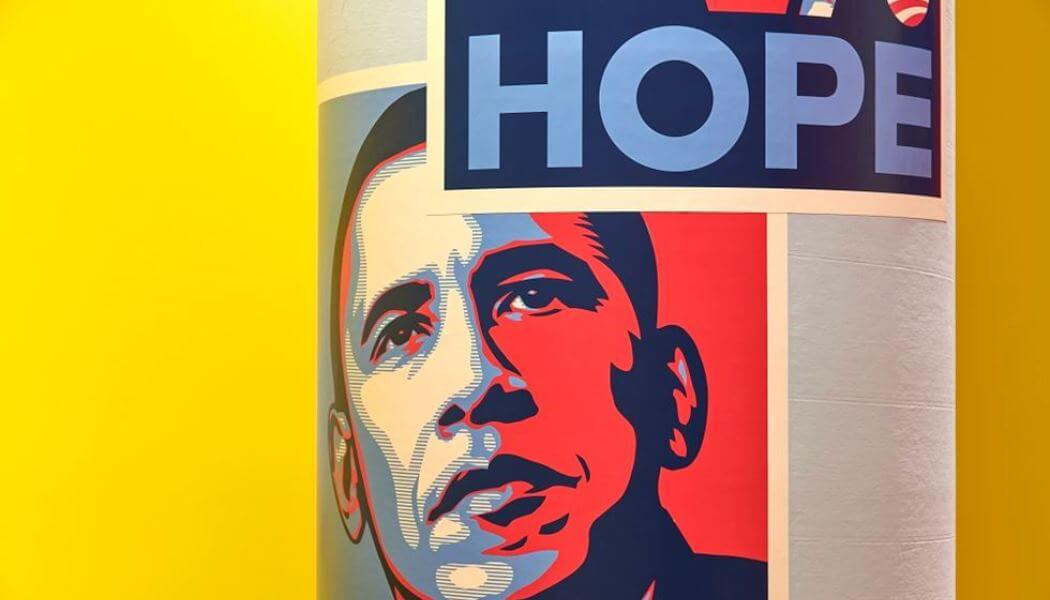 Main Image: More than 40 artists, including designer of iconic Obama ‘HOPE’ poster pictured, have demanded their work is removed from Design Museum in opposition to arms trade event. Courtesy of the Design Museum
Share

This is despite the museum being in discussions with the group and committing to not allowing arms, fossil fuel and tobacco corporate events in its building over the next few weeks while it reviews its policies

The artists, including Helen Glynn from BP or not BP? say the museum’s pledge ‘does not go nearly far enough’ following its hosting of an event organised by Leonardo, the 9th biggest arms company in the world, on Tuesday 17 July.

This action comes four months after another group of artists and performers threatened to pull out of the Great Exhibition of the North over its sponsorship deal with BAE Systems, which was later pulled.

The Nope to Arms Collective, as the artists have named themselves, have notified the Design Museum to say they will be at the Kensington venue at 11am on Thursday 2 August to collect their art.

The Campaign Against Arms Trade, which has been working with the artists, said they have also requested that the museum displays a statement in the spaces where their work is currently hanging to explain why they have been removed.

The artists, and those who represent them, feel passionately that the Leonardo event should not have taken place alongside the Hope to Nope: Graphics and Politics 2008-18 exhibition, which explores how graphic design and technology have played a pivotal role in dictating and reacting to the major political moments of our times.

“As you say on your website, ‘Design is not only about things, but about what they do and what they mean’. By being on your walls in the context of the Leonardo event, our work takes on a new meaning: of complicity in the arms trade. This is completely unacceptable to us.

So, despite the fact that many of us feel proud to have been part of this exhibition and feel sympathy for the curators and museum staff who put it together, we are now informing you that a group of us will come to the museum at 11am on Thursday 2 August to supervise the removal of our art from your wall.

While our response to this issue has been unprecedented, the museum also has the opportunity to respond in an unprecedented way by making a public commitment not to take funding from arms, fossil fuel and tobacco companies. This would position it as a powerful example of best practice for the wider culture sector. We hope that this is what you decide to do.

The event should never have been allowed in the first place. The arms industry is based on war and conflict and should always have been a red line,” said Caat’s Andrew Smith.  If the new policy is to be robust then it must clearly and unambiguously rule out taking money from companies that fuel and profit from human rights abuses.”

The statement can be read in full here.

The museum said in a second statement on Friday that its existing fundraising policies are in line with those of our peers in the museum sector. The commercial hire of the museum that the artists objected to, it says, was a private party and formed ‘no part of the museum’s programme or had any endorsement from the museum’.

“Having listened to the concerns of those exhibitors, the Design Museum is undertaking a thorough review of its policies and is extending it to its commercial activities,” it said. “We have entered a dialogue in the hope of ensuring that the exhibits remain in place until the exhibition closes to the public on 12 August, to make sure as many people as possible have the opportunity to see the variety of work on display. In light of this, we are committing not to have any private event hires from defence, fossil fuels and tobacco companies while we undertake our policy review.”

However, rather than placate the artists, the Design Museum’s response has had the opposite effect with artist accussing the museum of searching for ‘quick fix’ solutions instead of making long-term comittments.

“Rather than admit they have done something wrong and commit to genuine change, the Design Museum’s directors are asking us to put our ethics on hold while they carry out a policy review,” said Helen Glynn from BP or not BP?, whose BP-logo ruff appears in the exhibition. “But when their Chair of Trustees is Peter Mandelson – who lists funding from BP in his House of Lords register of interests it’s hard to believe this isn’t the museum looking for a quick fix to a crisis.”

She said this should be an exciting opportunity for the Design Museum to put together an inspiring ethical fundraising policy that would make it a leader in the cultural sector, but because of its chair of trustees’ conflict of interests, she though it unlikely ‘but we’d love the Design Museum to prove us wrong’.

Write and editor, Malu Halasa, who loaned work from the anonymous Syrian poster collective Alshaab Alsori Aref Tarekh (‘The Syrian People Know Their Way’), said: “I gave high-resolution files of Syrian posters to the exhibition in good faith. I had no idea that the museum would be entertaining arms dealers while showing an exhibition of resistance posters and art. For me and the artists I represent this is akin to serving cocktails on the corpses of the over 400,000 people who have died in the over eight year-long conflict.”