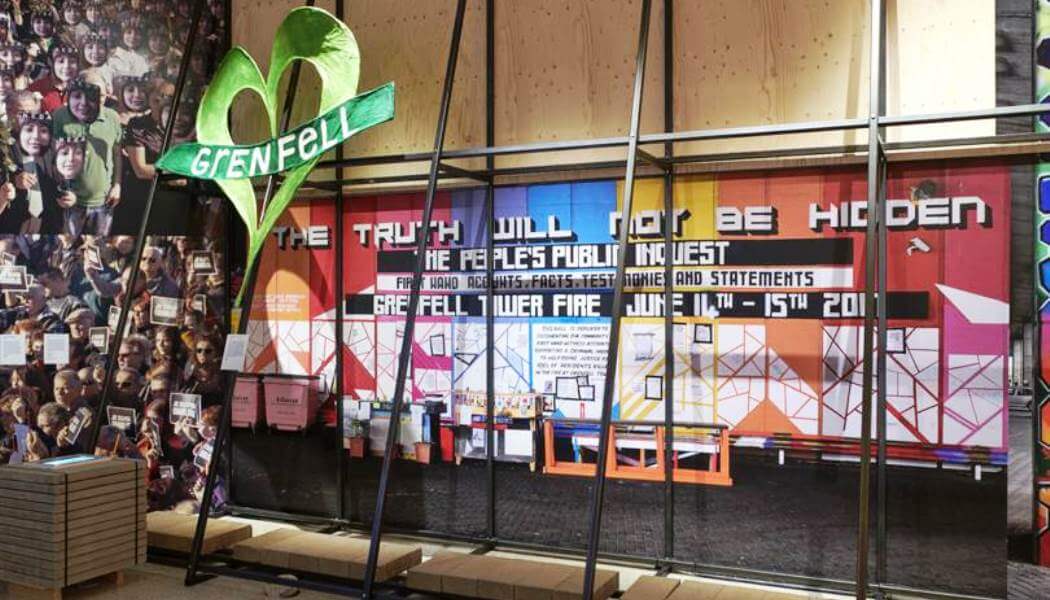 Main Image: Grenfell 'Wall of Truth' - 'The Truth Will Not Be Hidden', part of the Hope to Nope exhibition, co-designed by Kiran Chahal and Stephanie Turner, who have signed a letter of protest about an 'arms-sponsored' event held at the Design Museum. Photo courtesy of Design Museum
Share

The Design Museum has received a letter today (Wednesday 25 July) signed by 30 artists, who have art displayed at the museum’s current Hope to Nope: Graphics and Politics 2008-18 exhibition, on permanent display and for sale in its shop, asking for their work to be removed following an event last week

The letter published online by the Campaign Against Arms Trade, states that an event was held at the museum by Italian arms firm Leonardo (which is the world’s ninth largest according to the Stockholm International Peace Research Institute) in conjunction with the Farnborough Air Show.

It says that the artists ‘were appalled to learn that the museum hosted an arms industry trade event as part of the Farnborough International weapons fair. This happened on the evening of Tuesday 17 July, the same time as a discussion about the role of social media and design in contemporary social justice politics as part of the Hope to Nope season of events.’

The letter states that it ‘is deeply hypocritical for the museum to display and celebrate the work of radical anti-corporate artists and activists, while quietly supporting and profiting from one of the most destructive and deadly industries in the world.’

It says that Hope to Nope, which explores a decade of protest from from the global financial crash and the Arab Spring, to ISIS, Brexit and Trump through graphic design, is making the museum appear progressive and cutting-edge, ‘while its management and trustees are happy to take blood money from arms dealers’.

The criticism was aimed at the management and trustees of the Design Museum and not the curators who the letter says ‘have created a fantastic showcase of radical art’.

“Museums are not neutral spaces – every decision about what is displayed, how it is labelled and how it is funded is political, and reveals something about the underlying values of the institution,” the letter states. “By hosting an arms industry event, the Design Museum is presenting values that are strongly at odds with most of the art in Hope to Nope, which aspires to use the power of design to challenge powerful elites and promote peace and justice.”

The letter ends by demanding that the artists’ work will be taken down by 1 August at the latest, as it is now being displayed without consent.

The Design Museum responded by saying: “The museum received a letter this morning from some of the contributors to its Hope to Nope exhibition that is closing on 12 August. We are in the process of responding to each contributor regarding the display of their work. The museum is saddened that they may wish to remove their work before the end of the exhibition. It will be a missed opportunity to share the important design stories behind these exhibits.”

It says that as a charity, 98% of the museum’s running costs come from admissions, retail, fundraising and event hire, such as the one hosted that night. It said that was a private event of which there was no endorsement by the museum.

It also said that The Design Museum is committed to achieving its charitable objective to advance the education of the public in the study of all forms of design and architecture and is thus a place of debate that, by definition, welcomes a plurality of voices and commercial entities. “However, we take the response to Tuesday’s event seriously and we are reviewing our due diligence policy related to commercial and fundraising activities.”

An online petition saying the Design Museum should not be supporting the arms trade has received 2,440 signatures.