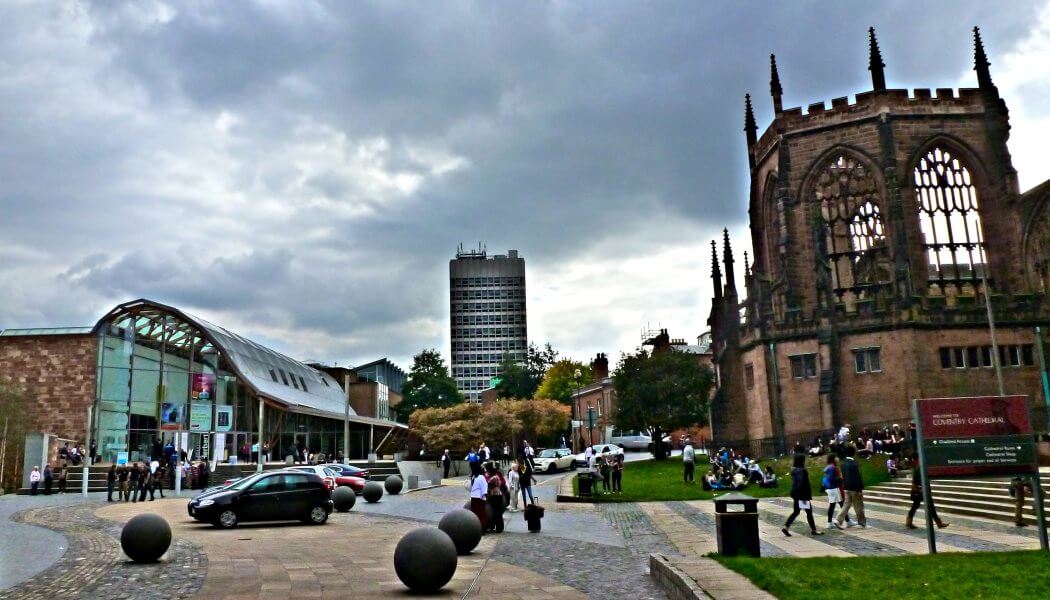 Main Image: The Herbert Art Gallery and Museum on the left and Coventry Cathedral ruins to the right. Photograph by Herry Lawford (Wiki Commons)
Share

Arts Council England said the funds would go towards ensuring a fantastic year of cultural events and celebrations, alongside the build-up period and legacy programme as the city embarks on a ‘transformative journey, celebrating the people and places that make it unique’.

Coventry boasts many well-established cultural gems including the Herbert Art Gallery and Museum, the Transport Museum, the Cathedral Ruins – bombed in the Second World War – and new Basil Spence cathedral connected to it, the Priory Visitor Centre, which holds the remains of the city’s first cathedral founded by earl Leofric and Lady Godiva a thousand years ago, and the 15th century Coventry Doom painting at Holy Trinity Church all situated a short walk away within the city centre.

“Coventry has a long tradition as a centre of creativity. People here are famous the world over for making things – and for making things happen,” said Darren Henley, Chief Executive, Arts Council England. “This new £5m investment from the National Lottery means the team behind Coventry’s winning UK City of Culture bid can now turn their creative dreams into reality. My belief is that by the end of 2021, the lives of everyone here will have changed for the better. Along the way, this sustained investment in artists and cultural organisations will secure Coventry’s rightful place on the national and international stage as a dynamic, innovative, inclusive, international and forward-looking 21st century city.”

Coventry will become only the third UK City of Culture and follow in the footsteps of Derry/Londonderry (2013) and Hull (2017). It is a title which has the power to radically change a city for the better, creating new cultural event, a feel-good factor, jobs and an economic boost. Last year Hull was in the spotlight as it organised dozens of city-wide events and festivals as well reopened its Ferens Art Gallery, which hosted the Turner Prize exhibition (which Coventry will also do during its tenure) and a new contemporary art gallery, Humber Street Gallery. By August of last year, Hull’s museums had welcomed more than a million visitors, many of them from outside the city, its highest ever figures.

Chenine Bhathena, Creative Director, Coventry City of Culture Trust, said: “Our bid to win City of Culture was bold and ambitious, challenging us to explore the role of culture in a diverse and modern Britain. Our vision [is to put] arts and culture at the centre of the city’s social development, embracing our youthful, diverse and creative communities to reimagine ourself as a future city.”

The Arts Council said it would also be investing separately in Coventry’s Herbert Art Gallery and Museum, to enable it to become more energy efficient and environmentally friendly. The Herbert has been awarded a grant of £376,353 to upgrade and improve the building’s ventilation systems, light fittings, humidity systems and create new protected storages spaces. This will help reduce the organisation’s overheads and reduce the buildings carbon footprint by around 22 per cent.

Christ in Glory: Conserving one of the world’s largest tapestries at Coventry Cathedral