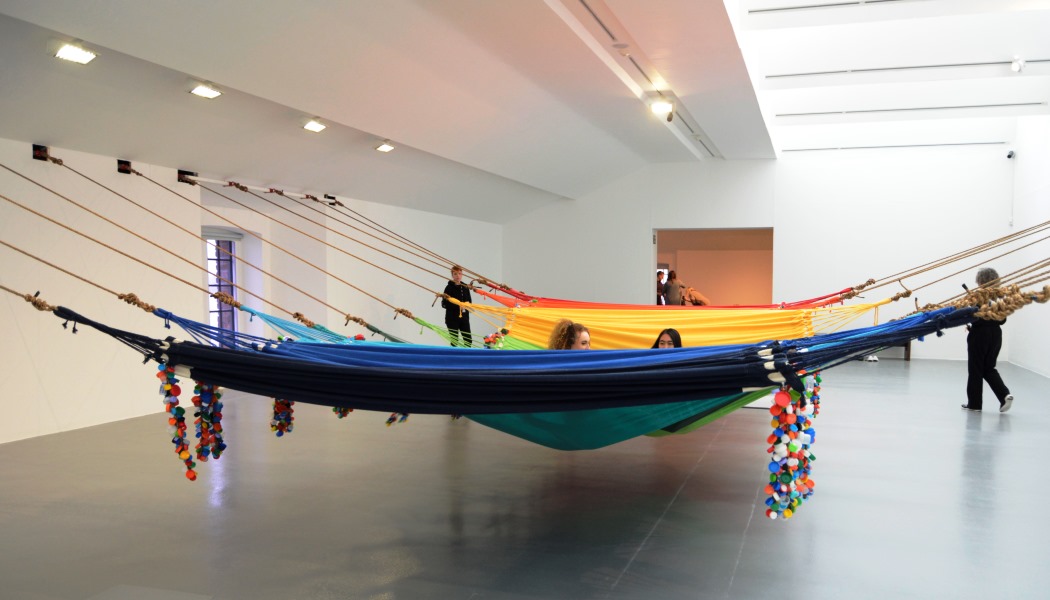 By Adrian Murphy. Main Image: Part of the Opavivará!: Utupya exhibition at Tate Liverpool incudes a huge hammock that hopes to encourage collaboration between visitors in order to climb into them. © Tate Liverpool, Laura Deveney
Share

Tate Liverpool’s top floor gallery was transformed at the weekend by Brazilian collective Opavivará! into an immersive environment featuring physical and audio-visual installations including a giant hammock. The three interactive elements to the exhibition aim to promote a sense of inclusion for the visitor by allowing them to become part of the art

Opavivará!: Utupya expands on the Brazilian artists’ decade-long work, which is a combination of ‘utopia’ and the generic term for the native Brazilian ‘Tupi’ tribes, and conceives environments and situations to reflect positively on the hybrid, mixed nature of contemporary culture.

The free exhibition is the latest edition of Tate Liverpool’s We Have Your Art Gallery series, which seeks to challenge conventional behaviours in public and gallery spaces by encouraging visitors to complete the artwork by becoming an active part of its interpretation. The first commission was Art Gym, devised and delivered by young people in spring 2016 with Assemble.

As part of the latest exhibition there are three playful and interactive installations including Rede Social where the group have created a ‘social network’ in a giant hammock made by stitching together several individual hammocks. The idea is that the unstable nature of the giant hammock encourages negotiation and collaboration between visitors as they get in to, and move around within it.

In Pajémirim, the Rio de Janeiro artists invite visitors to come together and share their experiences at a communal tea station where infusions using medicinal herbs will be freely available encouraging visitors to relax in the gallery space. Then in the central gallery space Opavivará! asks for a slightly more creative approach as it fuses ancient Brazilian dance rituals with contemporary sound scapes and invites visitors to create their own compositions by choosing which sounds to play.

Louise Shannon, Interim Head of Programmes at Tate Liverpool told M+H Advisor that the work allows a more participatory engagement with contemporary art whether through printing on your skin, drinking the tea or swinging in the hammocks. “The audience acts not only as participants but as activators of the work, a core component that is essential to the success of the works,” she said. “We are delighted to be presenting work that hopes to challenge people’s perception of what an exhibition may be. At Tate Liverpool we want visitors to be able to engage with all forms of contemporary practice.”

Opavivará!: Utupya runs at Tate Liverpool until 24 June 2018. The exhibition is supported by Tate Liverpool Commissioning Circle and the Opavivará! Supporters Group, and is sponsored by Birmingham School of Art, Birmingham City University.