Consisting primarily of loans from across the UK and Europe, the exhibition will shed new light on the story Stonehenge, and the recently discovered ‘Seahenge’ structure

The British Museum has revealed details of its upcoming special exhibition on Stonehenge.

Beginning in February 2022, The world of Stonehenge exhibition will see over 430 objects brought together from across Europe and claims to be the first exhibition of its kind to tell the ancient structure’s story.

The majority of its exhibits are loans from 35 lenders across the UK, the Republic of Ireland, France, Italy, Germany, Denmark and Switzerland.

Key loans include British grave goods unearthed near Stonehenge, ancient gold hats depicting the cosmos, and a wooden monument – dubbed Seahenge – that recently emerged after millennia from the sands of a Norfolk beach.

Seahenge at the time of excavation. © Wendy George

The exhibition will center around this 4,000-year-old Bronze Age timber circle, which consists of a large upturned tree stump surrounded by 54 wooden posts. It is the first time ‘Seahenge’ has been on loan, coming from the Norfolk Museums Service, where it is partially displayed at the Lynn Museum in King’s Lynn.

The museum said its inclusion in the exhibition will help tell the story of the shared beliefs that inspired ancient communities to build the many monuments found across Britain, Ireland and beyond.

Dr Jennifer Wexler, project curator of The world of Stonehenge at the British Museum said the Seahenge structure, which was rediscovered in 1998, still poses many questions.

Wexler said “there’s much that still eludes us, including exactly what it was used for. Perhaps the central upturned trunk was used in funerary rituals to support a dead body. Perhaps entering the circular shrine brought worshippers closer to the otherworld.”

Also on loan from Wiltshire Museum will be the whole hoard of objects that accompanied a burial known as the Bush Barrow site. This burial hoard has never been lent in its entirety before.

From Salisbury Museum will be the treasures buried with the Amesbury Archer, a man honoured with remarkable grave goods after his death. 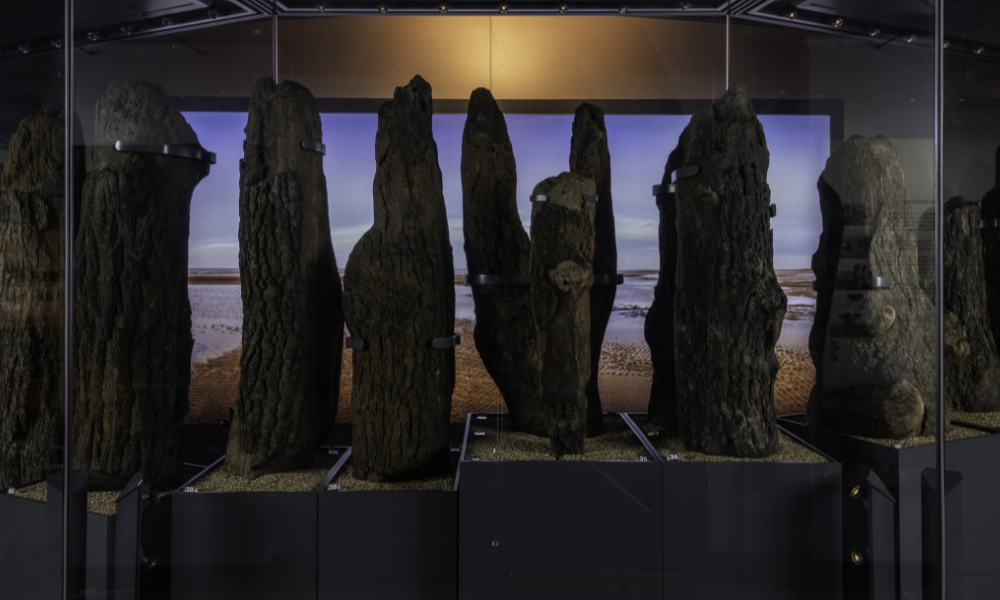 Seahenge timber posts on display in the Lynn Museum. On long term loan to Norfolk Museums Service from the Le Strange Estate.v

The exhibition’s curator Neil Wilkin said its story “transcends the Salisbury Plain and even Britain and reaches far into continental Europe. Stonehenge’s eternal mystery and significance can only be fully understood by charting the surrounding world that made it possible.”

The exhibition has been organised with the State Museum of Prehistory, Halle/Saale, Germany, who will be lending the previously announced Nebra Sky Disc, the oldest surviving representation of the cosmos anywhere in the world.

The world of Stonehenge runs from 17 February – 17 July 2022 in the Sainsbury Exhibitions.

‘Stonehenge of the North’ to join National Heritage Collection