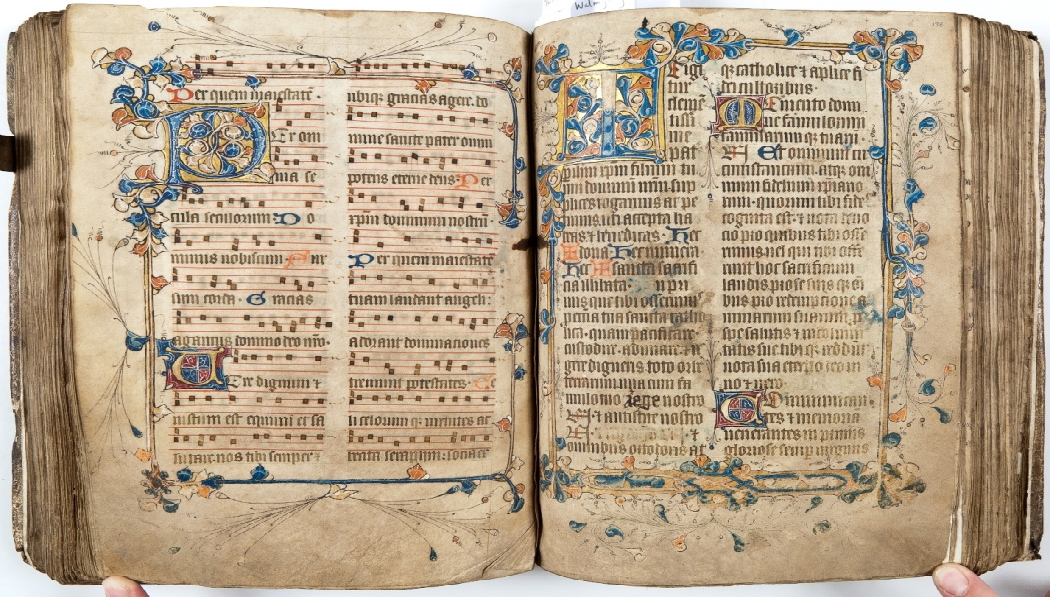 The Broughton Missal, an extremely rare medieval manuscript containing the text and music needed for church services, has been purchased for Lambeth Palace Library

A grant of £15,000 from the National Heritage Memorial Fund (NHMF) along with grants from the Art Fund, the Friends of the National Libraries, the BH Breslauer Foundation and the Friends of Lambeth Palace Library, has helped to purchase the Broughton Missal, a beautifully illuminated early 15th century manuscript. It will now be available for study and appreciation by the public and historians for the first time.

The Broughton Missal is a rare surviving manuscript of the text and music for Roman Catholic church services, according to the Use of York, with adaptations reflecting the practice and interpretations which developed at York Minster during the Middle Ages. Prior to the Reformation, most parish churches in northern England would have owned at least one York Use missal, but now only 12 examples are known to survive anywhere in the world and several of these are incomplete.

The Broughton Missal is the last known example still to be in private hands and is the first to be acquired by a British institution since 1932. Its penwork and decoration is English and of high quality, with large illuminated initials in gold, blue and red, elaborate borders and extensive penwork flourishing. The volume is still in its original late medieval binding.

Giles Mandelbrote, Librarian and Archivist of Lambeth Palace Library, said: ‘This is a major acquisition for Lambeth Palace Library, filling a significant gap in our holdings as the principal library and archive for the national history of the Church of England. We are delighted to have acquired this important manuscript, which will be of great interest to historians, who have never had a proper opportunity to study it. It is also a beautiful and evocative object, which we look forward to making available to a wider public, through the Library’s website and in future exhibitions.’

Each one of these manuscripts is different, ranging in date from the 13th to the 15th century, and each has its own story to tell, offering new insights into the way in which medieval church services were conducted and how they were experienced by the congregation. The Broughton Missal, for example, gives detailed information about the colours to be worn by the different ranks of clergy participating in the mass.

The Broughton Missal was in use in the parish church of All Hallows, Broughton (three miles north of Preston, Lancashire), for at least 150 years, spanning the English Reformation. The various notes and alterations written on the text, including replacing mentions of the Pope with references to the King, provide an important witness to the religious and cultural life of a parish in the north-west of England during that period of upheaval.