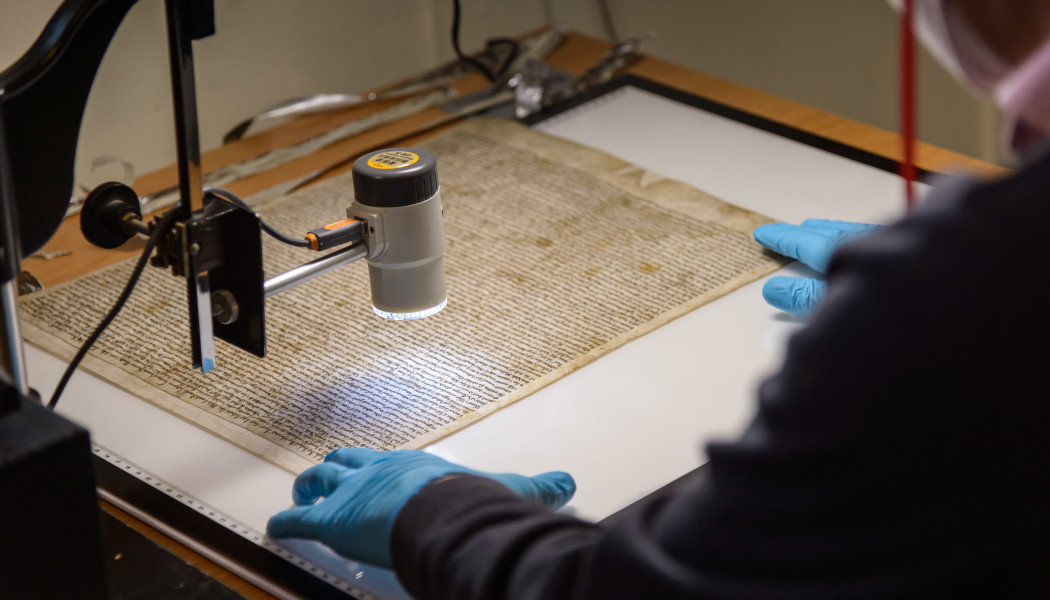 This year marks the 800th anniversary of the signing of Magna Carta and at Salisbury Cathedral Archivist Emily Naish and Chris Woods, Director of the National Conservation Service have been working on its first full condition inspection. Here they report back to M+H Advisor on the ground-breaking document’s background and their findings.

Salisbury’s Magna Carta was received by the Cathedral in 1215 at its original site, now known as Old Sarum, just outside modern day Salisbury. It is likely that the Salisbury exemplar was one of those entrusted to Elias of Dereham for distribution.

During 1215 Elias has been steward to the Archbishop of Canterbury, Stephen Langton.  Langton acted as mediator between King John and the rebel barons to negotiate the peace settlement now known as Magna Carta and thus deflect the possibility of civil war. A few years later Elias was elected a Canon of Salisbury Cathedral and was a prime figure in the construction and design of the new Cathedral in the valley below Old Sarum from 1220 onwards.

Thus Magna Carta was transferred together with the rest of the Cathedrals manuscript books and documents from Old Sarum to the present Cathedral during the main period of its construction between 1220 and 1258. For much of the last 800 years it was probably stored in the Cathedral’s Muniment Room together with other Cathedral documents and treasures. Several of the original medieval chests in which Magna Carta is likely to have been stored still survive.

At the outbreak of WW2 many of the Cathedral’s treasures, including Magna Carta, were removed for safe keeping and stored for the duration of the war at Westwood Quarry near Bradford upon Avon. The following is a description by the Cathedral’s Canon Treasurer The Reverend R Quirke of the moment when he went to the Quarry to reclaim Magna Carta:

“An official led us into a rock hewn tunnel floored with cement and lit by electric light.  ‘Above our heads,’ he said, “is a rock 80 feet thick.” We followed him 250 paces into the heart of the hill.  At last we came to doors opening into a great chamber.  It was cool, clean and dry in there: the rushing sound in our ears was air poured in to keep a constant temperature of 63 degrees Fahrenheit. ‘What are those blue lights?’ asked my friend. ‘Ah!’ he replied ‘We are taking no chances with what we have here. In the event of fire, smoke would rise and interrupt the beam between those two lights causing a bell to ring in the control room.’ We looked around us. As far as the eye could see were shelves arranged in bays left and right, and on the shelves innumerable cases. ‘We may take ours?’ I said. In reply he took us aside into a small room used as an office, and sat down to write. My eye caught some Greek words cut in the rock, which in English might run: ‘Fearing a sudden stroke from heaven above, I hastened hither to the gods below’. Scarcely had I taken this in when he handed me a form to sign. I signed the form he gave me and took my deposit. It was Magna Carta.”

From 1981 until the present Magna Carta has been on display in the Cathedral’s medieval Chapter House. Unfortunately surviving records of any special conservation treatment or display environment are sketchy up until the second half of the 20th century. The earliest records we have of conservation treatment is of Magna Carta being sent to the Public Record Office (now called The National Archives) immediately following the war in 1945 for it to be flattened and mounted.  A photograph taken in 1919 survives showing the document before it was flattened.

In 1954 a safe was installed in the Library to store Magna Carta when not in display and in 1955 a new display case was constructed housing MC beneath a framed plate glass with ‘ventilation provision’.

Conservator checking Magna Carta prior to the London unification event at the British Library in March. Copyright Salisbury Cathedral

In 1980 Magna Carta was sent to the British Library where it was ‘encapsulated’ or sandwiched between two sheets of ‘Hyviz’ glass with thin metal bus bars concealed within the glass laminate. This procedure was done in environmental conditions of 50 per cent RH and 61f.  A ‘throw-over’ mount of uterine vellum was added to the top edge and the seals holes exposed at the base of the document.  The seal holes had previously been covered by another strip of parchment (possibly added in 1945), this was removed. A 1/16th air gap was formed with strips of Perspex bonded into the edges of the sandwich with epoxy resin.  Around the outside edges a seal was formed with three layers of ‘Kosushi’ paper bonded also with epoxy resin. The finished capsule was then framed in a wooden mount.  Magna Carta was then moved from display in the Library to the Chapter House where it has remained ever since.

Again in 1991 Magna Carta was transported to the British Library this time with the prime intention for it to be photographed in order that a facsimile could be produced by Alecto Historical Editions. While at the British Library in 1991 Magna Carta was re-encapsulated in a similar way to that in 1980 with the difference of substituting Melinex 516 film in place of uterine vellum for the throw-over mount, the capsule was resealed with an epoxy resin mix.

In 2014 Salisbury Cathedral was delighted to have been awarded £415,800 by the HLF to help it celebrate Magna Carta’s 800th anniversary in 2015.The project, Engaging with the Magna Carta, will see the complete re-display and re-presentation of the Cathedral’s Magna Carta in its Chapter House alongside other documents from the Cathedral’s extensive archive. Using displays, media, interactive stations and film, this permanent exhibition, to open in March 2015 will tell the story of how Magna Carta came about and explore its lasting legacy, encouraging the many visitors to consider its enduring relevance to our rights and responsibilities today. In addition Salisbury Cathedral’s programme will include a broad range of community engagement activities.

The HLF grant has enabled us to reassess Magna Carta’s conservation and display requirements, thus engaging an expert conservator, Chris Woods, Director of National Conservation Services to carry out (for the first time) a full condition inspection and report which will act as a base record for future inspections. The new display case and exhibition structure will aim to improve the visibility of Magna Carta for visitors. The case will incorporate built in humidity controls and the glass will have UV filtration and be fire resistant. The design of the enclosure in which the display case will be placed is designed to shield the document from visible light to a greater extent than has been the case in the past.

Magna Carta is written on sheepskin parchment. In addition to the normal concerns of the effects of extremes of temperature, humidity and light, parchment has a greater tendency than paper to expand and contract on its own thus putting stress on the applied ink.  Therefore with a parchment document such as Magna Carta the potential instability of the ink is a major concern. After 800 years the parchment itself is susceptible to irreversible damage should it get too warm and to rapid deterioration if wet.  If too damp, parchment is a rich source or nutrients for mould and bacteria resulting in catastrophic damage. The ink is unstable in humid conditions and will fade in light with an ultra-violet content (such as sunlight) and if too bright for sustained periods. Taken together, these vulnerabilities mean that Magna Carta must be kept at a stable, moderate humidity, cool temperatures and low light levels with no UV if it is to be preserved for future generations.

The inks appear to be relatively stable (compared with some other charters of this era for example); the recipe for the batch of ink used had the right balance of ingredients to ensure that colour intensity (‘blackness’) is strong, the ink is not as readily fugitive in moisture as can be the case and is not eroding the parchment surface. If light levels are controlled carefully, the writing will remain strong for many more centuries.  The parchment has been modified somewhat by earlier preservation methods, probably in the 19th century, but not such that it is degrading significantly, so if the environment around the charter is kept stable and within a safe range it should last for generations to come.

In recent history Magna Carta has only been handled when necessary for conservation purposes. The Cathedral has a very high quality facsimile of Magna Carta created by Alecto Historical Editions in the 1990s.  This is available for close study in the Cathedral archives.  The facsimile acts as an indispensable surrogate to reduce the stress of handling on the original.

When compared with exemplar such as Lincoln Cathedral’s and the British Library’s copies, Salisbury’s ink is the clearest and strongest, and may also be the most stable. It is clearly legible and the parchment sheet is quite even and undistorted, which makes it easier to read and to understand. Earlier display method and restoration treatments have not caused as much potentially damaging interference as other copies.