The work has been created for the annual Tate Britain Commission 2015, supported by Sotheby’s, which invites artists to make new work in response to the grand spaces of the Duveen Galleries at the heart of Tate Britain.

The filters is inspired by Mackie’s interest in colour and perception. The south Duveen Gallery is transformed by a composition of dipped silk nets suspended over pans of semi-crystallised dye, anchored to the floor by hand cast weights. This aerial network of ropes and colourful dyed silk is animated by the natural light that permeates the space. Alongside the nets, a vibrant yellow sculpture, suggestive of a scientific apparatus, is located in the central space of the Octagon. In the north Duveen Gallery, the installation is completed by a plinth displaying chunks of coloured cullet – raw glass sourced from a foundry. 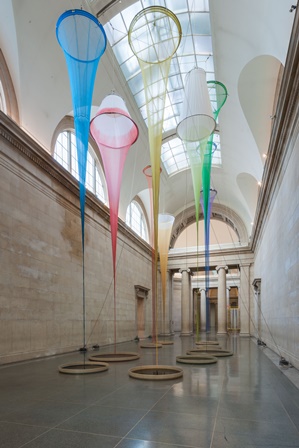 Over the course of her career, Christina Mackie has produced a wide and varied body of work. She trained as a painter and her work has developed to span a range of media, including sculpture, watercolours, photographs, ceramics and found materials. In 2007, she made The Large Huts for the lawn outside Tate Britain and in 2005 she won Beck’s Futures at the ICA. Recent exhibitions include PRAXES, Berlin (2014), Colour drop, The Renaissance Society, Chicago (2014), Painting the Weights, Chisenhale Gallery, London and Kunsthal Charlottenborg, Copenhagen (2012). the filters develops ideas set out in projects realised last year in Berlin and Chicago.

Penelope Curtis, Director, Tate Britain said: "Christina Mackie has long been interested in the exchange between the natural and man-made worlds as exemplified in pigment and paint; the rich historic collections surrounding the Duveen galleries have been magically reconfigured by her highly individual installation".

The filters runs until 18 October 2015 at Tate Britain’s Duveen Galleries. Entry is free and open daily 10am – 6pm.