A major painting by one of Britain's greatest and best-known landscape painters, John Constable, has been given to the nation through the Acceptance in Lieu Scheme (AIL) and permanently allocated to the Ashmolean Museum in Oxford.

Willy Lott’s House from the Stour (The Valley Farm) shows a cottage in the Stour Valley in Sussex, where the artist spent his childhood years.

The subject was central to many of Constable’s greatest paintings, including the later Valley Farm from 1835 and the same building is seen from a different angle in The Hay Wain which is now in the National Gallery. 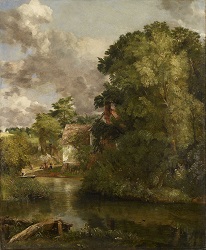 John Constable RA: Willy Lott’s House from the Stour (The Valley Farm) Oil on canvas 24in by 20in

It is the first finished work by Constable to enter the Ashmolean’s collection and was painted c.1816-18, depicting the view from the south-west bank of the river Stour looking towards Willy Lott’s house.

The AIL Scheme allows those who have an inheritance tax bill, to pay for it by transferring important works of art and cultural objects to the nation.

In the last two years this important government initiative has brought over £80m of treasures into public ownership for the enjoyment of all.

The painting has a particularly interesting early provenance as it was owned by Jonathan Peel, younger brother of Prime Minister, Sir Robert Peel, 2nd Baronet, whose fine collection of paintings was sold to the National Gallery in 1871.

In 1848 it was sold in London and acquired by the New York philanthropist and collector, James Lennox and is believed to be the first work by Constable to enter an American collection before returning to the UK in 1956.

The Acceptance in Lieu Panel, chaired by Edward Harley, advises ministers on the suitability of items offered in lieu. The acceptance of this painting settled £1,012,200 of Inheritance Tax.

Dr Alexander Sturgis, Director of the Ashmolean, said: "It is a huge honour to receive this beautiful painting – the first finished work by Constable to come to the Ashmolean – in my first month as Director.

“The Museum is profoundly grateful to Arts Council England for its support. The painting is on display in the 19th Century Gallery where it can now be enjoyed by thousands of visitors in perpetuity."