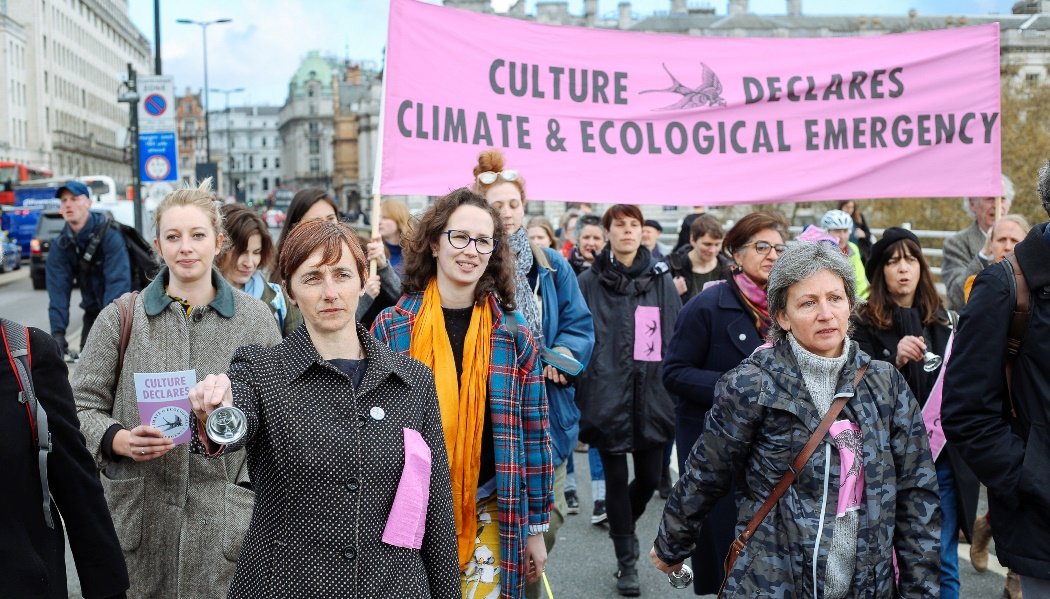 The Culture Declares Emergency movement launched with a curated and disruptive procession, stopping at institutions along the River Thames and setting off from Somerset House.

Bridget McKenzie, cultural consultant and one of the organisers of Culture Declares Emergency, said:  “Culture Declares Emergency is about revelation of truth and declaration of our intentions. It is coming together in one sound with and for many voices, in solidarity with all those affected by the Climate and Ecological Emergency. It is the first of many waves of artists and cultural organisations announcing their intentions. It begins in London, a place implicated with the extractive and colonial histories that have led us to this Emergency but it is also a place rich with culture that can be turned towards the task of reimagining how we relate to one another and the living planet.” 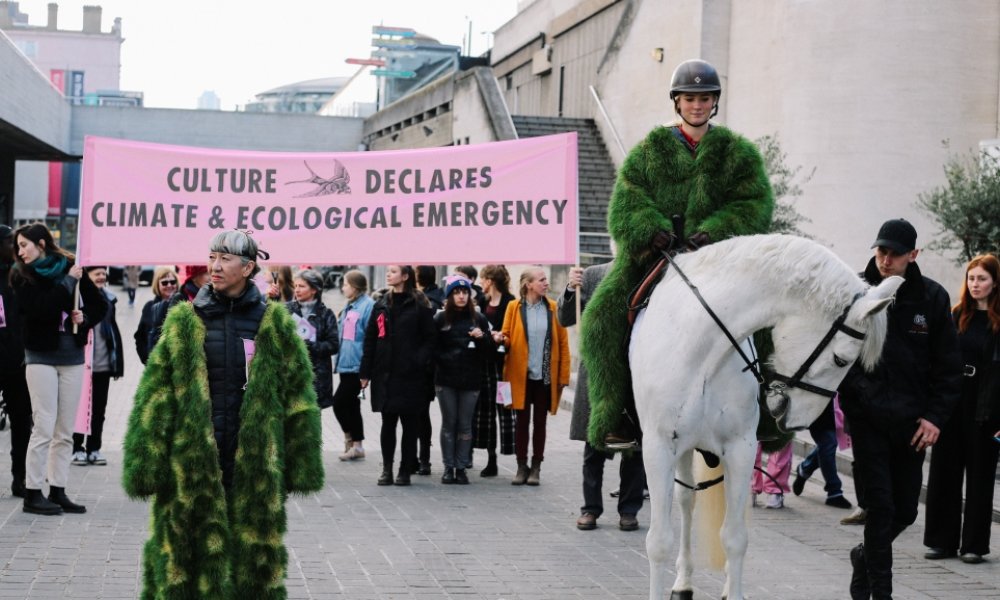 Among the procession were ‘Heralds’ wearing living grass coats grown by visual artists Ackroyd & Harvey and carrying banners with names of declarers listed. A newly composed soundscape by Mira Calix featured in the ceremony of declarations of Planetary Emergency, as well as readings from selected ‘Letters To The Earth’, writings submitted by the general public for a nationwide cultural action, which is first project of Culture Declares to take place on Friday 12 April. These letters will be made rights free and available to download and present anywhere in the world from 15th – 28th April, coinciding with the International Extinction Rebellion and School Strike For Climate.

Karishma Rafferty, a curator at Somerset House, said: “Somerset House is a historical site with over two and a half thousand creative residents based here, our cultural programme is all about engaging with the critical issues of our times, which includes, obviously, the current Climate and Ecological Emergency, so this is completely in keeping with our values in terms of galvanising the sector in terms of acting on the Emergency at hand.”

She added: “It requires not just one organisation or institution or even a very large community like ours, it requires all kinds of different groups within society taking this up.”

Those declaring an environmental emergency will make a series of pledges, and follow up with a range of actions to respond to the emergency. For example, ONCA gallery based in Brighton, pledged to “Work towards reducing [the gallery’s] CO2 emissions to net zero by 2025 by continuously reviewing and developing our environmental policies in dialogue with our suppliers”

Any organisation or cultural practitioner that would like to join the declaration can do so here.