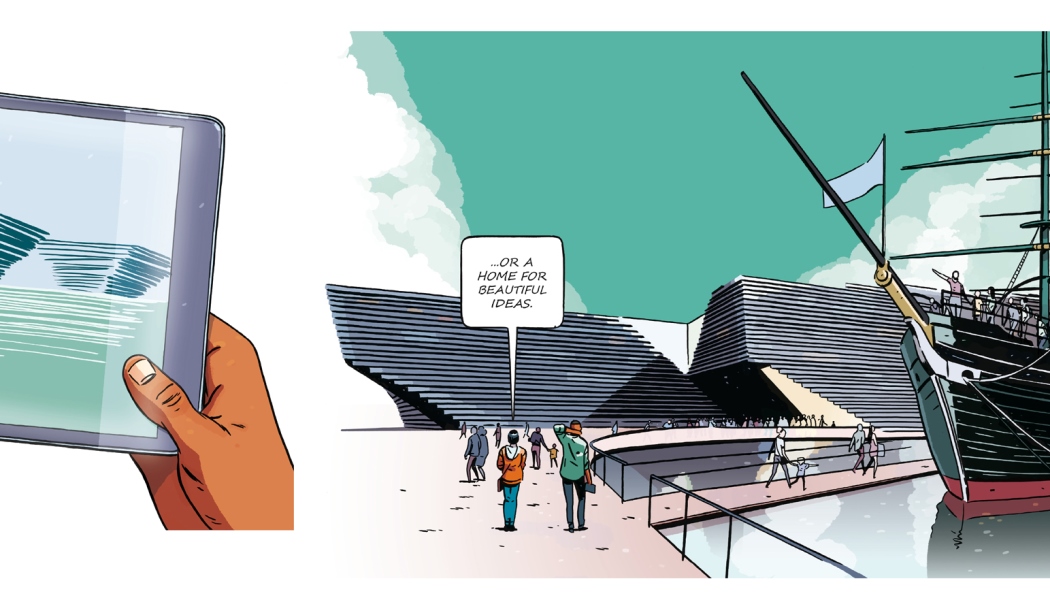 This comic strip tells the story of design and is in line with V&A Dundee’s core aim, which is to nurture and promote Scotland’s design industry. Dundee is also the home DC Thomson & Company, Limited. Which still publishes one of the UK’s most popular comics, The Beano.

A shortlist of some of the most exciting emerging Scottish design talent was compiled and the designers asked to submit ideas for the hoardings graphics.

Morris and Mackenzie’s response, ‘Adventures in Design’ tells the story of the everyday relevance of design – how it solves problems, improves lives and makes the world more beautiful and fun.

Over three sequences it explores the way in which the most exciting innovations don’t just appear – they are the result of a rich and varied collaborative design process. Featured Scottish designs include the Falkirk Wheel, Harris Tweed and Dundee-based game developer Guerrilla Tea’s data-crunching ‘Genes in Space’ collaboration with Cancer Research UK.

Alongside these stories, some of Dundee’s most prestigious innovations also feature – from Keiller’s marmalade, Valentine’s first picture postcard, Lemmings, Maggie’s Dundee and the city’s attribute as the first designated UK UNESCO City of Design.

“Comic illustration is such an integral part of Dundee’s creative history that we immediately understood the appeal for local audiences.  Equally we hope this approach will inspire and excite audiences nationally, and around the world,” says Tara Wainwright, Marketing & Communications Manager for V&A Dundee.

“It’s essential to us that we engage our communities in the story of design. The comic strip provides an unusual and memorable way of starting to explore some of the ideas and themes we’ll look at in the new museum.”

Adventures in Design can be seen at the V&A Dundee construction site until 2017. The V&A Dundee will open to the public in summer 2018