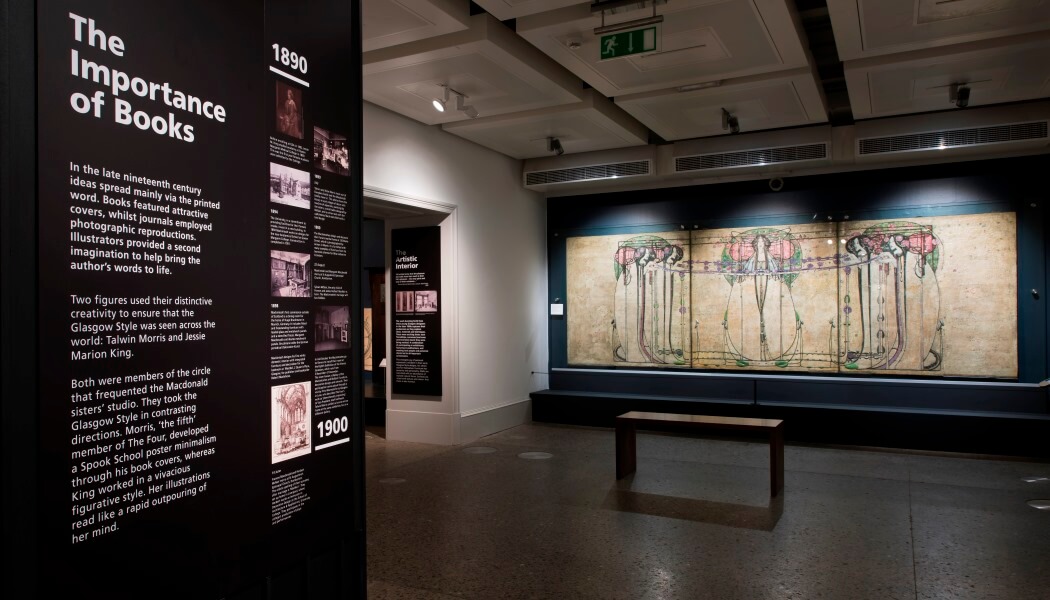 Main Image: Charles Rennie Mackintosh – Making the Glasgow Style exhibition with, in the foreground, The May Queen by Margaret Macdonald. Photograph courtesy of Campbell & Co
Share

Glasgow Museums is celebrating the 150th anniversary of the birth of Glasgow architect, designer and artist Charles Rennie Mackintosh (1868–1928) this year and the centrepiece of the tributes is a major temporary exhibition at Kelvingrove Art Gallery and Museum. Here exhibition design specialists, Campbell & Co describe the man, his movement and their design of the new exhibition dedicated to his work

During the latter part of the 19th and early part of the 20th century, Glasgow was a thriving industrial powerhouse. The city’s commercial prowess was matched by its artistic and creative innovation, exemplified by the genius of Charles Rennie Mackintosh, a polymath, artist, architect, designer and regarded as the central figure in the only ‘Art Nouveau’ movement in Britain.

Mackintosh, however, did not exist in a creative vacuum. With his wife Margaret MacDonald, her sister Frances and her husband Herbert MacNair – the self-proclaimed ‘Immortals’, he was part of a hugely prodigious group of designers and makers working in Glasgow at this most conspicuous period in the creation of what came to be known as ‘The Glasgow Style’. 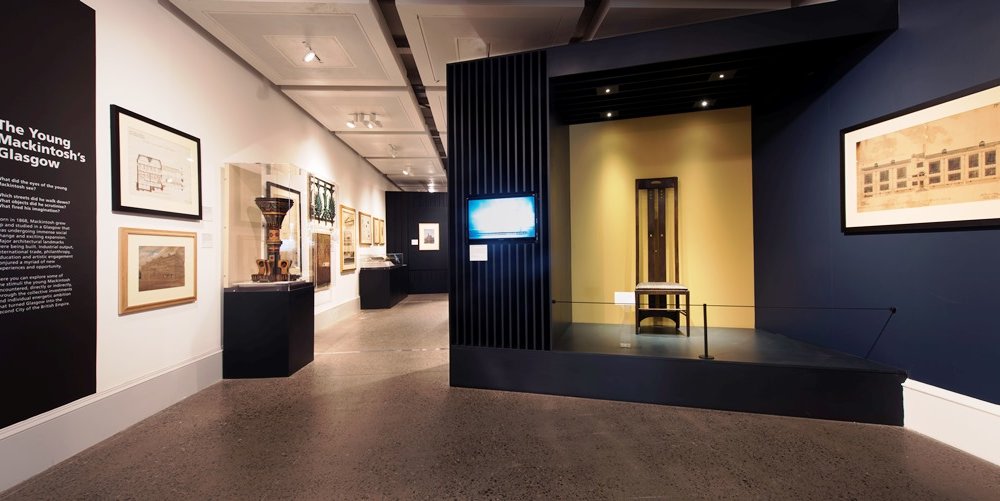 This new exhibition Charles Rennie Mackintosh – Making the Glasgow Style at Kelvingrove Art Gallery and Museum places Mackintosh at the centre of the Art Nouveau movement, but also alongside his creative peers and collaborators. The displays include a wide range of objects – furniture, drawings, ceramics, glass and paintings, some of which are on public display for the first time.

Arranged over six galleries, the exhibition follows a broadly chronological order, with interpretive themes highlighting Macintosh’s creative development from a brilliant young architect to an accomplished water colourist toward the end of his life. Mackintosh objects are displayed in each section to allow his work to be understood in the broader context of the Glasgow style and the work being produced by his contemporaries. 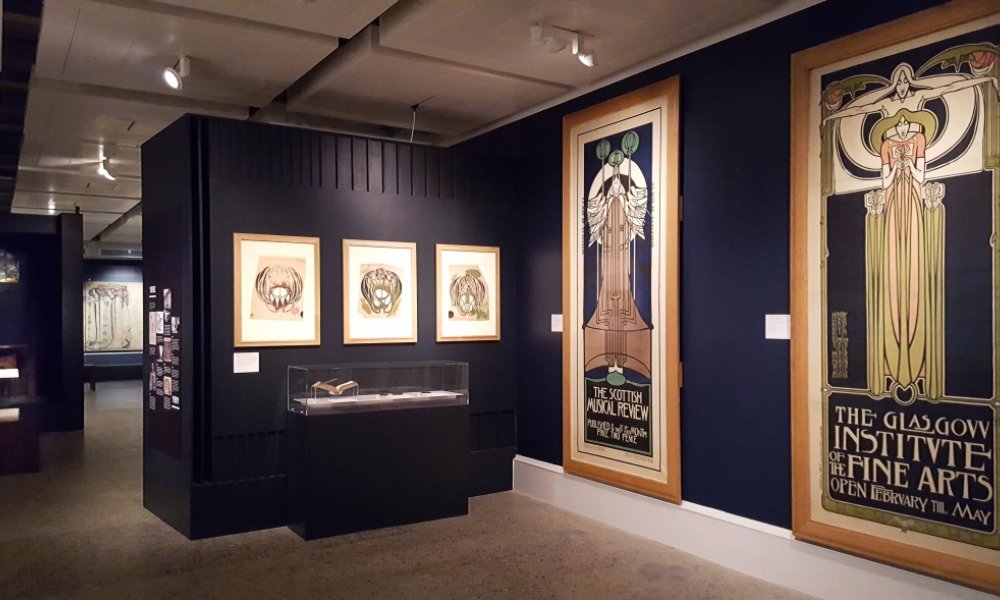 The exhibition presents the very best of Glasgow’s internationally important civic collections, drawing from both those of Glasgow Museums and The Mitchell Library and Archives

The galleries are narrow, with little opportunity for central floor displays and Campbell & Co chose to make a predominately wall based exhibition. Large display ‘boxes’ were introduced to break up the length of the galleries and reinforce the exhibition themes. The exhibit boxes also house IT based interpretation and are used to support combinations of furniture, pictures, lighting and graphics. There are a large number of light sensitive paper and fabric objects, including many loans and all display fixtures are painted largely in very dark grey to help soak up the light.

As the exhibition and the story unfolds, the background colours get lighter, in part to reflect the development of Mackintosh’s colour sensibility which gradually became lighter and more delicate during his career, although towards the end of his life, he produced very bold geometric pattern designs in vivid yellows and black, clearly heralding the beginning of the Art Deco style. 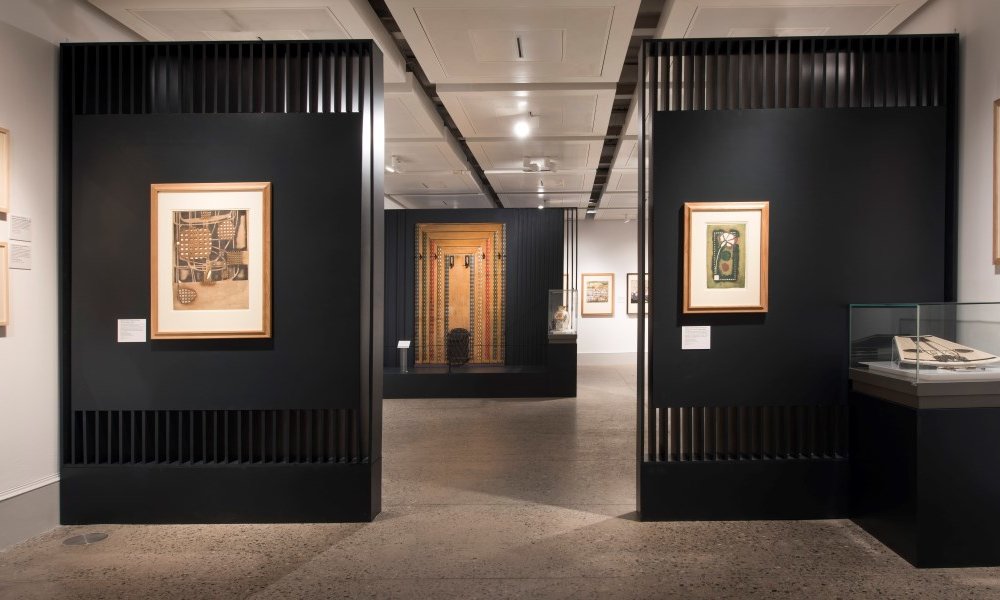 To avoid the often-unwelcome intrusion of graphic panels in exhibitions with strong imagery and objects, Campbell & Co elected to contain the bulk of the narrative within a timeline in each gallery with a short introductory text. The object labels and guidebook, were also designed by Campbell & Co and provide additional interpretive detail.

The exhibition is the centrepiece of Glasgow’s year-long celebration of the 150th anniversary of Mackintosh’s birth and runs at Kelvingrove until 14 August 2018.