Audley End House and Gardens in Essex has begun its second phase of repairs that will tackle all remaining work to the 17th century mansion.

In its heyday Audley End House was one of the greatest Jacobean prodigy houses, built between 1605 and 1614 by the first Earl of Suffolk on the site of an earlier house converted from the buildings of Walden Abbey.

It was bought by Charles II and used as a Royal Palace until 1701 by which time it was in poor condition and considered horribly old fashioned.

Financial pressures led to the house being reduced in size and remodelled in several stages during the 18th century, chiefly for Lady Portsmouth and her heir Sir John Griffin Griffin.

It was again remodelled, this time in an antiquarian style for the third Lord Braybrooke and his wife Jane Cornwallis in the late 1820s and early 1830s.

A number of different types of stone were used in the construction of Audley End House including a soft limestone called Clunch was used extensively in the facades at Audley and over the years it has begun to deteriorate. 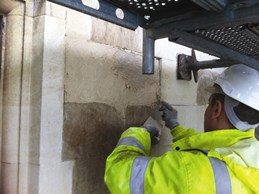 David Odgers Conservation is trying a new technique which employs ceramic armatures to support lime mortar, allowing moisture to readily move into and out of the stone, ensuring it is tough enough to recreate the edges of the corner stones and halt further decay, while still creating a visual match to the existing stone.

The project will also be an opportunity for English Heritage to work with the contractors in using the conservation works for training in traditional skills.

In this project a painting and decorating trainee will be learning from the craftspeople, those working on the project will gain additional qualifications and a course on understanding the repair and maintenance of traditional pre-1919 buildings will be based on site.

A special scaffold tour allowing English Heritage members to view the conservation works at close hand will be planned for the New Year and will be announced in due course.

While the work is carried out on the house, the extensive grounds, stable yard with resident horses and organic walled kitchen garden will remain open to visitors throughout the winter and the winter programme of events will continue as usual.