Fashion on the Ration: 1940s Street Style at IWM

During the Second World War British men and women had to find new ways to dress as austerity measures and the rationing of clothes took hold. They demonstrated amazing adaptability and ingenuity by adopting more casual styles and by renovating, recycling and creating their own clothes. Bringing together 300 exhibits including clothing, accessories, photographs and film, official documents and publications, artworks, wartime letters, interviews and ephemera, some of which have never been on display before, Fashion on the Ration presents a sense of what life was like on the home front for men and women during wartime Britain.

Divided into six sections, Fashion on the Ration will reveal the reality of living in Second World War austerity Britain, by focusing on what people wore, their sense of identity and how they coped with the demands and deprivations of wartime restrictions and shortages.

Into Uniform looks at how Second World War Britain became a nation in uniform, arguably the biggest visible change to how people dressed at the time. Many key pieces of uniform, both from the men’s and women’s services, will be on display revealing the pride and even jealousies felt by those stepping into uniform for war service.

Functional Fashion explores how the demands of wartime life changed the way civilians dressed at work and at home, inspiring retailers to sell innovative and stylish products, such as gas-mask handbags, blackout buttons and siren suits, all of which will be on display.

Rationing and Make do and Mend will look at why clothes rationing was introduced in 1941, how the scheme worked and how it changed the shopping habits of the nation. With limited options for buying new clothes, people were encouraged to be creative and make clothes last longer by mending, altering, knitting and creating new clothes out of old material. Items on display include a bridesmaid’s dress made from parachute material, a bracelet made from aircraft components, a child’s coat made from a blanket and on display for the first time a bra and knickers set made from RAF silk maps for Countess Mountbatten.

Utility Clothing was introduced in 1941 to tackle unfairness in the rationing scheme and standardise production to help the war effort. Utility fashion ranges were made from a limited range of quality controlled fabrics and this section will feature a catwalk of pieces, including a lady’s cotton summer dress, underwear, a tweed sports jacket and leather gloves, and a girl’s velvet green winter dress. Clothing restricted by ‘Austerity Regulations’ such as shoes with a maximum two inch heel will also be featured. 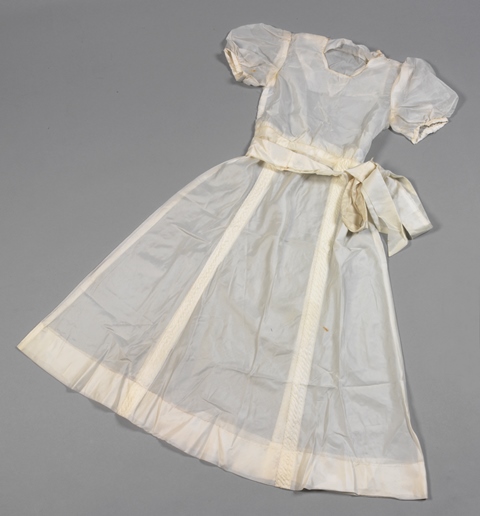 A bridesmaid dress made from parachute silk, 1945. Copyright IWM

Beauty as Duty examines the lengths to which many women went, to maintain their personal appearance – and the pressure they felt to do so. On display will be adverts promoting war-themed make-up such as Tangee’s lipstick for ‘lips in uniform’. Cosmetics and clothing often had a patriotic edge to them as shown in a colourful display of scarves by Mayfair fashion house Jacqmar, with wartime slogans such as “Salvage Your Rubber” and “Switch That Light Off”. By wearing these items women were able to overtly demonstrate they were doing their bit for the war effort.

Peace and a new look? This section looks at how the end of the war impacted upon fashion, and considers the long-term impact. On display will be a ‘VE’ print dress worn by the comedienne Jenny Hayes to celebrate the end of the war, and an example of the ubiquitous demob-suit, issued to men leaving the military services. In 1947, the launch of Christian Dior’s ostentatious ‘New Look’ shook the fashion world desperate for something new after years of pared down wartime fashion. The exhibition ends with a special installation capturing the thoughts of leading fashion commentators, such as Great British Sewing Bee’s Patrick Grant and fashion historian Amber Butchart discussing the legacy of the Second World War upon fashion.