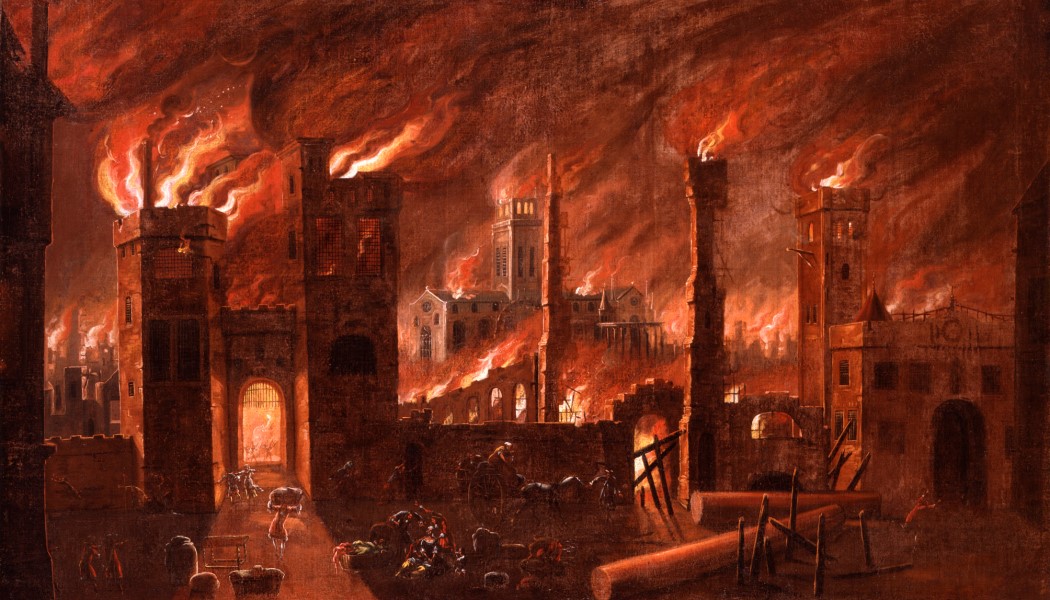 Fire! Fire! at the Museum of London, will focus on life on the eve of the fire, the dramatic events that took place as the blaze burned through a quarter of the city in 1666, and how London recovered from the devastation

The great Fire of London in 1666 is one of the capital’s most enduring historical events and Fire! Fire! is designed to be one of the Museum of London’s most immersive and interactive exhibitions to date, with setworks to recreate Pudding Lane and a huge moving panorama of London in flames. A variety of incredibly fragile flame-scarred archaeological artefacts reveal the destructive power of the inferno, while letters from eyewitnesses who escaped convey the terror and desperation that ordinary Londoners felt in the face of the fire.

A ceramic roof tile which should be flat and terracotta in colour has blackened, melted and bent in half. The damage shows that temperatures must have been over 1500oC. The tile was found in excavations of a house on Botolph Lane that had been destroyed by the fire;

Burnt padlocks and keys made from iron, found at Monument House excavations on Botolph Lane, near Pudding Lane;

A letter written by “sorrowful” James Hicks on September 41666 to inform postmasters of the “great loss and sufferings” from the fire. James Hicks worked at the post office in the City which burnt down shortly after 1am on 3 September. He and his family escaped to Barnet, taking as many letters as they could;

A letter written by Robert Flatman on September 9 1666 to his brother Thomas, a barrister who worked in the city but was out of town for the fire. Robert writes “your Chamber in the Temple is down, but your books are safe”, suggesting that he saved these items before Thomas’ rooms at the Temple were destroyed.

“Fire! Fire! showcases the very best of the Museum of London,” said Sharon Ament, Director of the Museum of London. “Given our mission to tell the story of the world’s greatest city and its people, it is only right that we honour the anniversary of the Great Fire of London, a truly iconic moment in London’s history, with a major exhibition which will be a great day out for adults and children alike.”

Fire! Fire! is part of Great Fire 350, a programme of events and activities in partnership with the City of London Corporation, Barbican, Artichoke and others to mark the 350th anniversary of the Great Fire of London. Further information on the exhibition and wider programme will be announced in 2016.

“As one of London’s most famous historical disasters, people often assume that there is nothing new to discover about the Great Fire of London,” said Meriel Jeater, Great Fire of London exhibition curator. “In fact, there are still numerous unconfirmed hypotheses about how and why the fire started, as well as a number of myths that have built up over the years. We seek to shed new light on the events of September 1666 with our rich collections of never-before-seen 17th century archaeological artefacts.”