The Royal Air Force Museum at Cosford officially unveiled its new exhibition area yesterday which celebrates the achievements of Britain’s air services, the Royal Flying Corps (RFC) and Royal Naval Air Service along with the contributions made by the West Midlands in the race for the sky during the First World War.

First World War in the Air will show visitors the incredible stories of the men and women who served and protected our nation in the earliest days of military aviation in Britain’s air services.

The exhibition uses the RAF Museum’s world-class collection of aircraft, documents, film and photographs to reveal how aviation changed the character of war forever.

First World War in the Air, made possible by a Heritage Lottery Fund grant and support from BAE Systems, was officially opened by Brendan Connor, Deputy Chairman of the RAF Museum Trustees.

Set among the museum’s collection of warplanes, three iconic First World War aircraft; the Sopwith Pup, Sopwith 1 ½ Strutter and the Bristol M.1c form the centre piece of the new display. 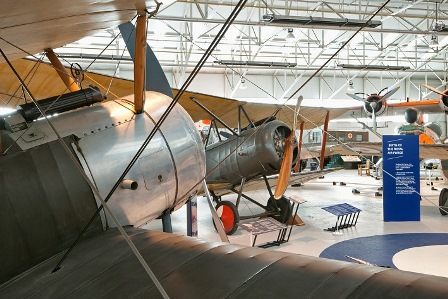 The Sopwith Pup was used extensively during the First World War by the Royal Naval Air Service and the Royal Flying Corps and considered the perfect flying machine by its Pilots. The Bristol M.1c and the Sopwith 1 1/2 Strutter are full scale reproductions.

Displayed alongside the aircraft are the personal items of Second Lieutenant Kevin Robert Furniss of the RFC, who lived only a few miles from Cosford in Wolverhampton. 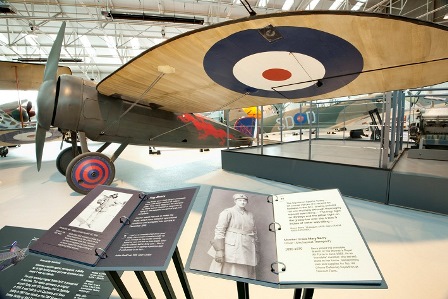 Donated to the Museum in 2013 by his great niece, Kevin’s belongings included documents ranging from baby photographs and school reports to obituaries and memorials, telling the story of Kevin’s tragically short life.

Artefacts on display include Kevin’s RFC flying helmet and wings, a complete wash kit and a letter to his father all returned to his next of kin following his death. The personal letters between Kevin and his family and friends provide an insight into the personality of this brave young man and his experiences during the First World War.

“It is incredibly important for the Museum to share these First World War stories and experiences with the local community here at Cosford, particularly when considering the ‘local heroes’ from the West Midlands area such as 2nd Lt. Kevin Furniss," said Karen Whitting, Director of Public Programmes at the Royal Air Force Museum.
"The exhibition also marks the beginning of an important phase for the Museum as it gears up to celebrate the RAF’s centenary in 2018.”