Once funding has been secured the museum will be redesigned and the auditorium will be updated to create a dynamic space that can be used for museum and community events.

The iconic building that houses the museum was built in 1834 in a gothic style and once served as the Severn Warehouse for the Coalbrookdale Company.

Goods would be brought down from the furnaces and forges in Coalbrookdale and shipped down the River Severn to the markets of Gloucester, Bristol and the Empire beyond. In later years it was also used as a petrol station and a soft drinks factory. 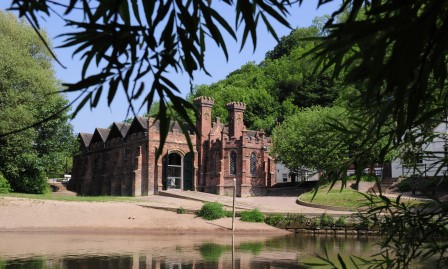 “Upgraded audio-visual equipment will also allow the museum to develop a varied programme of events such as film screenings, from historic Pathé footage to community film events.”

Art Happens is a crowd-funding platform, housed within the Art Fund website that aims to raise money for small-scale, achievable and highly creative projects in museums. Art Happens is a new approach to fundraising, bringing everyday museum visitors into the heart of creativity in museums.

As part of this scheme donors will be given a variety of fantastic rewards to thank them for their generous support.

For a donation of £25 they will receive a tote bag inspired by the table of tolls on the Iron Bridge, plus unlimited free entry to all 10 Ironbridge Gorge Museums for a year, project updates and a citation on the Art Happens website.

For those donating £100 they will receive a specially commissioned piece of glassware inspired by the Ironbridge landscape and made by Nikki Williams from Kinki Glass.

Aston said the trust had already raised almost £9,000 of its target and those wanting to donate can do so by visiting the Art Fund website by 4 December.