From Stone Age man to Red Rum – Between Land and Sea explores 10,000 years of Sefton’s Coast

Although there is much to celebrate, the Sefton coast has suffered from its share of hard times as well as good. The Bootle Blitz of 1941 saw 90 per cent of the town’s houses destroyed or damaged.

Bootle docks were a key target for Luftwaffe bombers during WWII and a recently conserved map from a downed German plane, to go on show in the new permanent exhibition, clearly indicates the grain stores at Alexandra Dock as the focal point for the many air raids that devastated the surrounding area. Around 4,000 people were killed in the Merseyside area during the Blitz, second only to London.

And in 1886, one of the worst lifeboat disasters in history unfolded off Birkdale’s coast, with 27 lifeboat crew losing their lives.

lifebelt from the iron ship the Mexico of Hamburg, which ran aground of the Sefton coast in 1886

The Atkinson has also drawn on Sefton Library’s extensive photographic archive. Visitors will be able to search through a large selection of contemporary images and maps documenting the extensive bombardment.

“The heritage of this coastline combines unspoilt beaches with some of the UK's largest dockland areas and a rich maritime history,” said Emma Anderson, director of The Atkinson.

“It is an area of contrasts – working ports and dense urban areas rub shoulders with areas of outstanding natural beauty. This is an important and valuable heritage for its tensions, contrasts and contradictions that capture changes in society, industry and the environment.

Southport for a Holiday in Wintertime is a promotional poster by Fortunio Matania c1935. It shows people leaving the art deco Garrick Theatre on Lord Street, which opened in 1932

“Our project has strategic, regional significance because, over the past 10 years, regeneration projects up and down the coast have stressed the importance of creating and enhancing sense of place – building up the uniqueness and integrity of places through culture and heritage.”

Among those celebrated for their roles in the story of Sefton are: the daring female motor-racing pioneers dubbed ‘scorchers’, ‘motorinas’ and ‘motoristes’ who tore up Southport beach in the 1920s.

The cartoonist behind Dan Dare, Frank Hampson, who was a pupil at King George V Grammar School (now King George V College) in the 1930s. 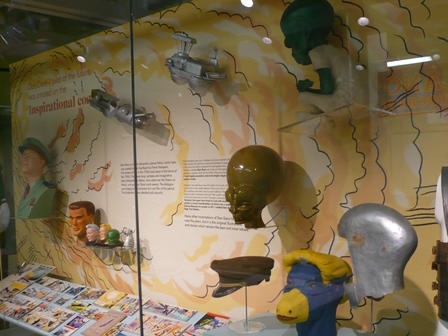 The formidable Mrs Mirabel Topham, the former Gaiety Girl, who ran Aintree race course in the 1950s and 60s. One of the most famous horses to race at Aintree, Red Rum was trained by Ginger McCain on Southport sands.

Frank Hornby, the inventor of Meccano, Dinky toys and Hornby model trains and the nine-year-old polar explorer and Southport resident FJ ‘Percy’ Hooper, one of the search party who discovered Captain Scott and his team’s bodies at the end of their ill-fated expedition to the South Pole.

Also on view is the Neolithic, or New Stone Age, mother and child who made their way across Formby sands to gather food, leaving their footprints as an echo from the region’s distant past.