The V&A has marked a milestone in the construction of its new museum as the shell of one its new constructions reaches full height.

The “topping out” of the new V&A East museum building in Stratford’s Queen Elizabeth Olympic Park – one of two V&A East sites currently under construction – was attended by those involved in the project, including V&A’s Deputy Director and COO Tim Reeve, and Mayor of Newham Rokhsana Fiaz OBE.

The building, designed by O’Donnell + Tuomey and constructed by MACE, will become the 7,000 square metre home of the V&A East Museum, topping out at 42.5 metres high. 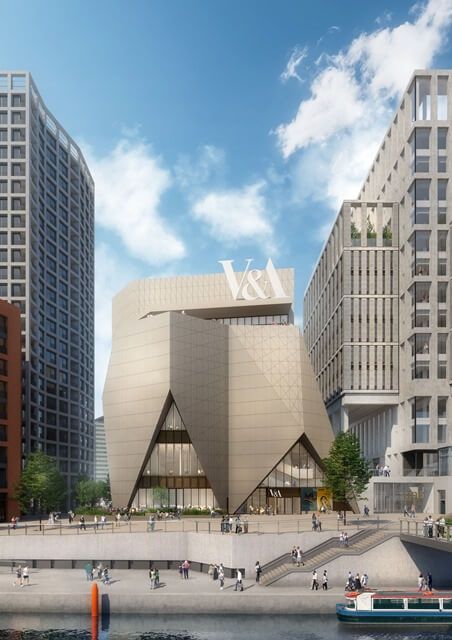 Set to open in 2025 on the Stratford Waterfront in London, the building’s profile will add to a skyline which already includings buildings for the BBC, London College of Fashion, Sadler’s Wells and UCL.

The area, known as East Bank, is the Mayor of London’s new arts, innovation and education district, and a legacy of the London 2012 Games.

Plans for the museum were first revealed in 2018, and construction began in August 2019, and, according to the museum “is being built with and for east Londoners.”

Last month the installation of pre-cast concrete panels began on the exterior walls, which will give the museum its unique faceted appearance, realising O’Donnell + Tuomey’s architectural vision inspired by the Japanese concept of ‘Ma’, or ‘the space between’.

The V&A said the pre-cast concrete façade, made by Techrete in North Lincolnshire, celebrates design and the “act of making with a sculptural and geometric scored motif that allows the building to stand out, while remaining united with the monolithic stone-like buildings across the East Bank site”.

To date, V&A East has engaged over 20,000 local people and creatives through consultation, education and career initiatives, and events and activities in partnership with east London organisations including CREATE, Bow Arts, Hackney Quest, Blackhorse Workshop, Bromley By Bow Centre, Spotlight Centre, London Centre for Book Arts and Turning Earth, among others.

Its second building, V&A East Storehouse, is set to open at Here East in 2024.