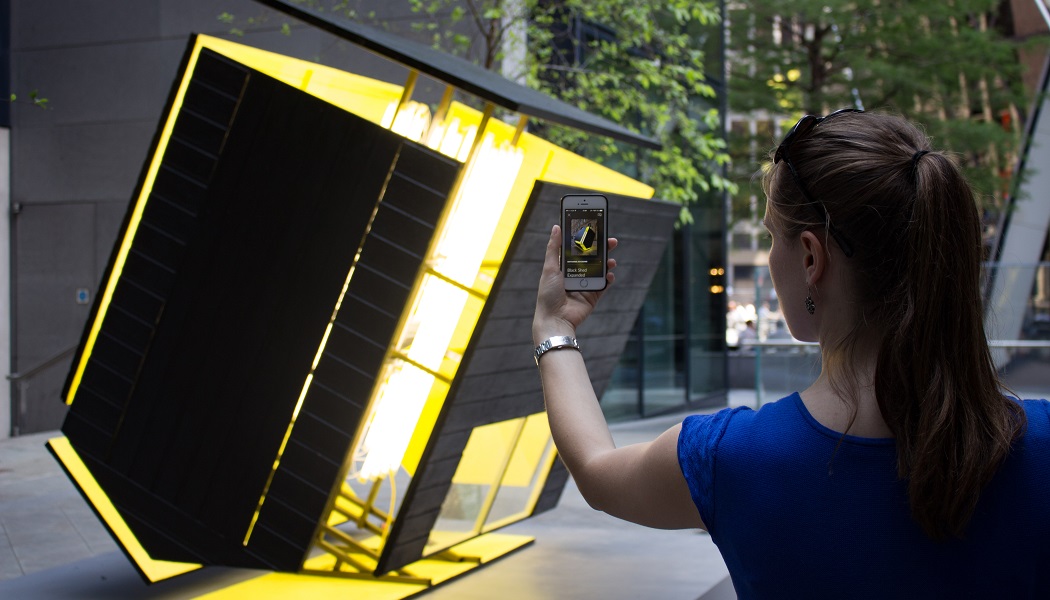 Getting to know Smartify, partner of the Museums + Heritage Autumn Series

What began in 2015 as a collaborative project between four museum-loving friends has now become a global technology company.

Smartify, the innovative app which has quickly garnered many industry admirers, enables cultural attractions of any size to offer a slick, accessible smartphone-led experience to every visitor.

At the end of a year in which digital solutions have shot up the list of priorities for most visitor attractions, Smartify has become a gold partner of the inaugural Museums + Heritage Autumn Series in order to play a central role in the debate surrounding the sector’s future.

In recognition of the difficulties most cultural institutions are facing at present, the company is offering a free trial of its app for six months and a 20% discount on membership for those organisations that would love to improve their digital credentials but weren’t aware how simple and affordable that can be.

With the Autumn Series now in full swing, Advisor editor David Styles caught up with Anna Lowe, co-founder and director of partnerships at Smartify, to discuss what the ground-breaking app can do for the sector.

Having collaborated with so many renowned cultural institutions, what do you enjoy most about projects within the sector?

Everyone working on the platform is a complete museum nerd, as you might expect, so we all love the content. This really helps as the whole team is so enthusiastic about what we’re doing. We also work with a lot of museums that discover they are able to achieve way more than they ever thought possible – receiving that kind of feedback is always a really great feeling.

We work with lots of large museums like the National Gallery or the Belvedere in Vienna but we also work with far smaller sites. What is so great about working with the smaller venues is that they often tell us using our technology has enabled them to level up and compete with the digital offer of much larger institutions.

What can Smartify offer a museum or cultural attraction?

We enable venues to switch from traditional interactives or paper guides to a multi-purpose app that visitors can access directly on their smartphones.

I think a lot of people have the perception that digital technologies have to cost a lot of money and that creating a bespoke audio guide will be an arduous, expensive and difficult process. Everyone who has used Smartify quickly discovers that does not have to be the case.

If you were developing an app from scratch it would normally cost at least £100,000, but we are charging £1,500 a year for use of all the platform’s features. Right now, actually, we’re running a free six-month trial so it wouldn’t cost anything to try out the technology.

While Smartify offers huge savings financially, it is also really efficient. The back-end of our site is very easy to use: it’s all automated, drag-and-drop and you can even do your recording and editing through a smartphone.

Whether you run an historic house or manage objects in a social history museum, the platform will work for you

Very importantly, you aren’t having to manually enter data and duplicate work that’s already been done in your collections database. We just integrate the two and everything is instantly accessible. All content can be changed and updated at any point as well, so you aren’t locked in for any period of time.

Aside from saving time and money, what other benefits does Smartify offer?

It’s available on iOS, android and as a web app so it’s fully accessible. We are also very well-known for a scanning technology, which enables users to scan and identify not just paintings but objects and architecture as well. Whether you run an historic house or manage objects in a social history museum, the platform will work for you.

In essence it provides a highly versatile digital wall label, making it very accessible to a full range of users. If your visitors require screen readers or larger font sizes then that’s instantly taken care of. An added benefit during the pandemic is that people aren’t required to touch anything as everything is available via their own phone.

The reach, too, is a major plus. I think most organisations we’ve worked with have been surprised by how many people are accessing their content. Using Watts Gallery – Artists’ Village in Surrey as a case study; the team there were thrilled when they got 5,000 listens on one tour whilst the site was closed. This was a tour that was made entirely at-home by the curators so they were really happy with that engagement.

The difference between us and mainstream social media platforms like instagram, for example, is that the platform is uniquely for art lovers and so communicating with target audiences is much more direct.

Are there any particular projects that stand out as really successful examples of the unique qualities Smartify has to offer?

Scottish National Galleries started using Smartify last year and tested it across all four of its sites. They wanted visitors to have a greater sense of the different spaces and the app was perfect for that as users can see that they’re nearby all four locations. It also meant the organisation could create tours that span all their venues.

When they launched the new Ray Harryhausen blockbuster exhibition this October they saw it as the perfect time to trial a range of interactive elements on the app.

For the exhibition, the team worked with the film director John Landis to create an audio guide, displayed works under copyright from the Ray & Diana Harryhausen archive that weren’t shown in the exhibition, and even made a skeleton from Jason and the Argonauts come to life using AR. That was all hosted on the app.

Our work with Scottish National Galleries started with more traditional uses of the app – scanning and audio guide – and has now fed into lots of different digital projects, demonstrating just how versatile Smartify can be. 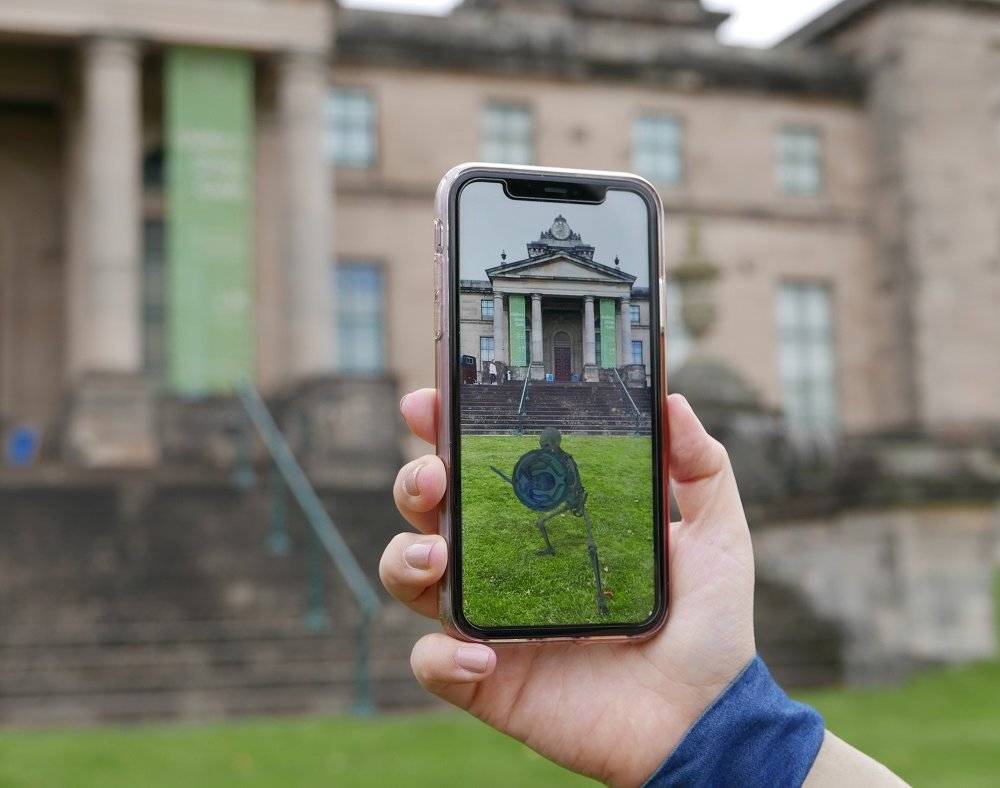 With more and more museums expanding their digital horizons, what does the company have planned for the future?

We have just launched our e-shop function. This integrates with museum shops so that when users see certain artworks or objects they can also see relevant items from the shop. This makes the user journey a lot more seamless and is a great way to help generate revenue – crucial for so many sites, especially this year.

Another area we are exploring is how we can better support museums to transition into more online learning experiences. At the moment people are using lots of different platforms but there isn’t one place where audiences can go to access lots of different learning experiences and pay the museum directly for providing them. Online classrooms for all ages is a concept we are looking at developing further next year.

Why is now the time for museums and cultural attractions to work with Smartify?

We’ve been very busy this year helping museums try and pivot to mobile solutions. While we realise it’s a daunting time for everyone, we want to encourage the sector to innovate and meet the financial challenges with creativity. That’s why we’re offering a free trial of the app for six months and a 20% discount on membership.

I know it’s hard for any organisation to think about pivoting, particularly when they don’t have any spare cash. Coming from a start-up perspective as we do, however, I think when you have limited resources that’s the time when you are naturally most creative because you have to change to survive. 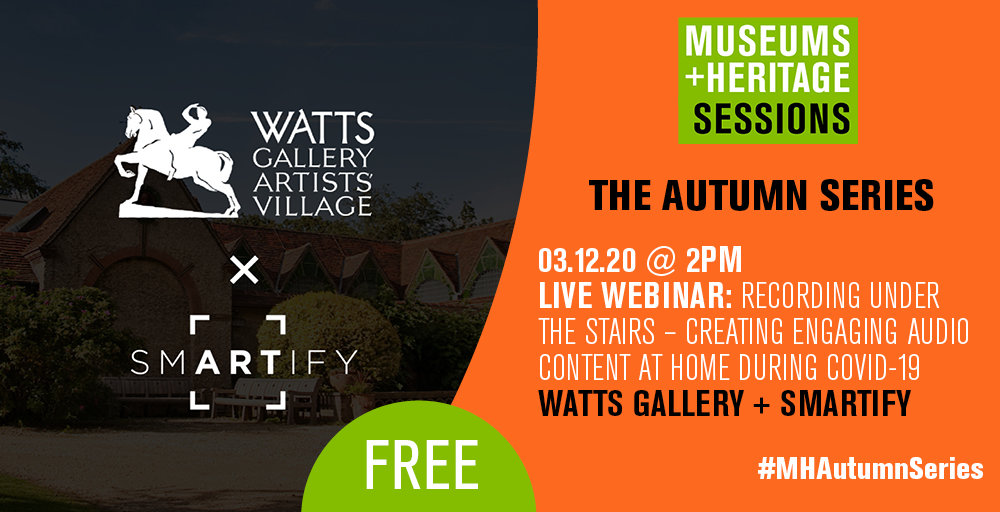 What about the M+H Autumn Series made Smartify decide to get involved, and are there any particular elements of the programme that you are looking forward to?

As a company we have always grown organically. Indeed, this is our first ever sponsorship of any kind. We have followed Museums + Heritage for a long time and felt it would be the perfect partner to work with on the Autumn Series.

I really like the fact the entire programme is free for people to access, with lots of content released across several weeks. This means people don’t have to clear their diaries for an entire day and they can fit it in around work commitments or watch sessions back later.

In terms of the content, I am particularly interested in sessions exploring how museums and the wider sector can respond to the climate emergency. Discussing how we as an industry can tackle some huge societal issues is vital – and the current crisis may well be the perfect time to make the changes.