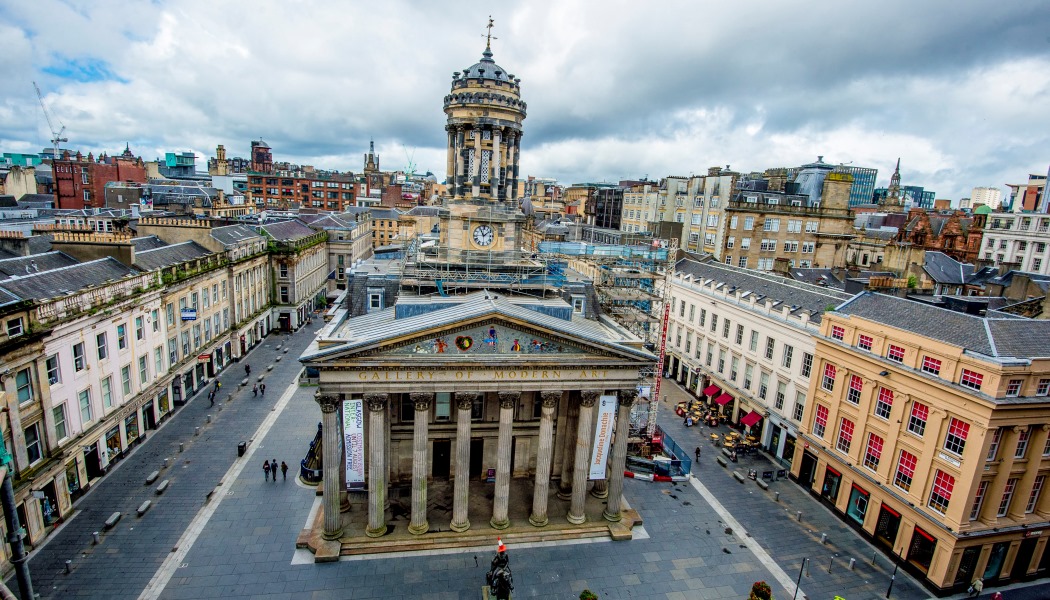 Restoration work at the Gallery of Modern Art (GoMA) focused on the clock tower and weathervane, which have been cleaned, restored and reinstated

The restoration work at GoMA removed previously stained cream masonry paint and cement repairs, together with vegetation growing out of the Corinthian column bases and extensive conservation repairs to the clock tower.

Glasgow Life, which manages GoMA, instructed conservation accredited architects at the Glasgow studio of Austin-Smith:Lord to assess the true condition of the tower and advise on a suitable repair strategy. The work was undertaken by City Building Group LLp and CBC Stone with financial grant support from Historic Environment Scotland.

The Royal Exchange Square building was originally constructed in 1778 as the townhouse of William Cunninghame of Lainshaw, one of Glasgow’s wealthy tobacco lords. It later became a bank in 1816 -17 when it was enlarged to create the Royal Exchange. It was this work which added the Corinthian pillars of the temple frontage to Queen Street and the Cupola and clock tower design.

We are delighted to reveal the restored clock tower and weather vane, in complete working order just in time for its 200th anniversary 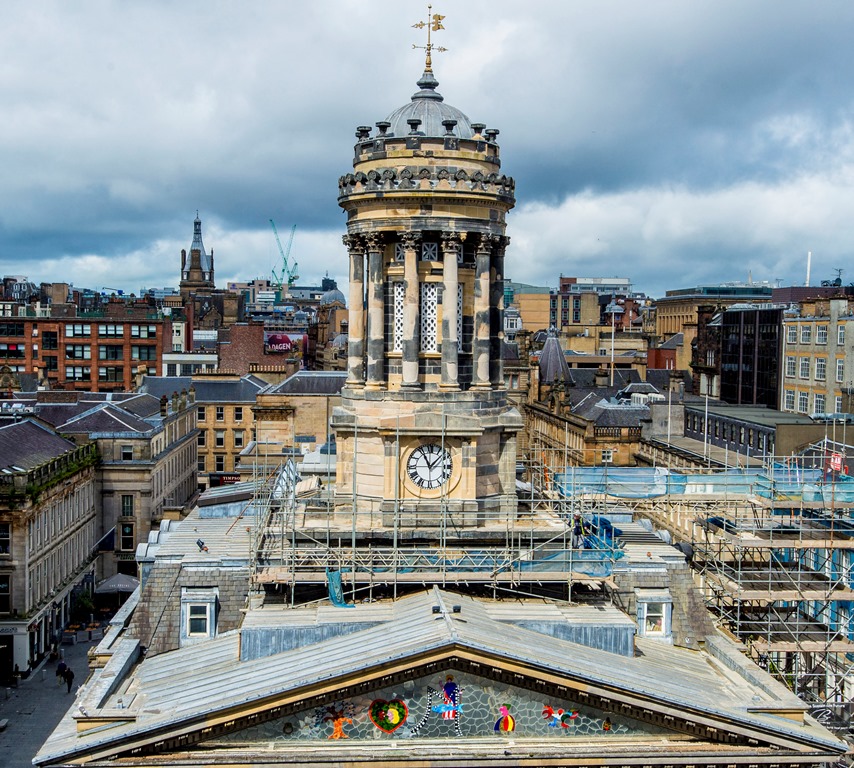 Initially the team began repairing the tower by cleaning off old paint, which was causing damage to the stonework, redecorating the clock face and removing vegetation from the building.

However, during the examination of the sandstone masonry, the restorers discovered some serious errors in the way in which the original tower had been constructed, between 1827 and 1829. This necessitated more extensive conservation repairs, including replacing stones that were incorrectly bedded in the past.

David Millar, director and head of conservation at Austin-Smith:Lord said it had been a very interesting and challenging project, which included assessing solutions and actions that would both enhance the visual aesthetic of this landmark and also ensure an improved lifespan of the masonry structure into the future. As part of the work Austin-Smith:Lord steam cleaned and removed loose material and carried out indent repairs following good conservation practice.

“There is always a level of risk associated with removing paint from sandstone but it’s an exciting activity as you don’t know what you might find,” said Millar. “We discovered masonry wrongly bedded and sandstone heavily carbonated and although some individuals might like to see these dark deposits removed it’s not good practice as you are potentially removing too much original historic and listed fabric.”

Frazer Gibson, Project Manager from Historic Environment Scotland, said the body was pleased to award funding to the Gallery of Modern Art in March 2015 to help restore the existing masonry of the tower and enhance the heritage merit of the museum and hoped it would encourage even more people to visit. In the past 12 months 600,000 people have been to GoMA, making it Scotland’s most visited modern art gallery.