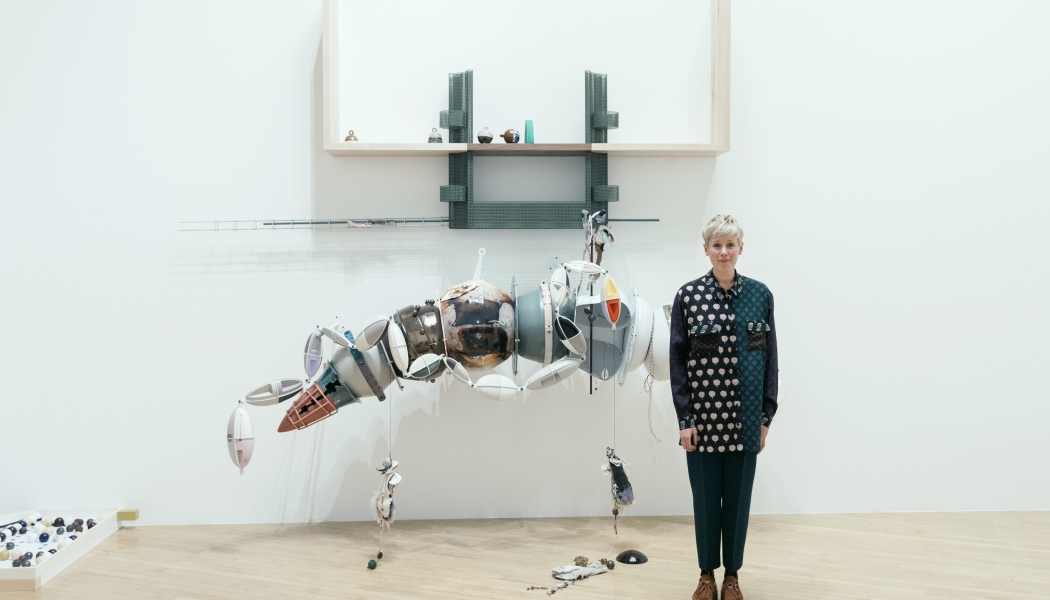 An exhibition of the four shortlisted artists runs at Tate Britain until January 2, 2017

Helen Marten was the youngest on the 2016 shortlist and uses sculpture, screen printing and writing to create her work. The prestigious prize is awarded to a British artist, under the age of 50, considered to have put on the best exhibition of the past year.

The £25,000 winning prize was presented by author Ben Okri with £5,000 awarded to each of the other shortlisted artists. The jury applauded the four nominated artists’ commitment and the strengths of their diverse artistic practices. They awarded the prize to Marten for projects including Lunar Nibs at the 56th Venice Biennale and the solo exhibition Eucalyptus Let Us In at Green Naftali, New York. It is the second prize in a month for Marten, who also won the inaugural Hepworth Prize.

The jury said the work was outstanding for its extraordinary range of materials and form and admired the work’s poetic and enigmatic qualities which reflect the complexities and challenges of being in the world today.

“[Her work] doesn’t present you with an easy, simple, static view of itself,” Farquharson said. “The work is like reading very rich, very enjoyable, very elusive, quite enigmatic poetry – rather than a very clear report on what happened in a newspaper. I think the thing is to enjoy it for its visual qualities, its physical qualities, and get lost in the game of meaning and games of composition that it offers up.”

One of the best known prizes for the visual arts in the world, the Turner Prize aims to promote public debate around new developments in contemporary British art. The other shortlisted artists for 2016 were: Michael Dean, Anthea Hamilton and Josephine Pryde.

Next year the Ferens Art Gallery in Hull, which is currently going through a £4.5m refurbishment as part of Hull’s City of Culture Year, will stage the event and exhibition.

Hull will be the fifth city outside London to host the Turner Prize, following Liverpool, Gateshead, Londonderry and Glasgow as the prize moves outside the capital biennially.