Invitation to fall in a theatre on a Friday night

Invitation to Fall is a special commission for the Museum of London as part of their Late London: Sherlock's City, placing the fall at the heart of Sherlock's story.

In the popular television series Sherlock's original Reichenbach fall is never seen: a fatal embrace with his nemesis reported and pieced back together from the scene of the crime.

And tonight people can experience a planned fall versus the accident, the moment of letting go and how can we prepare for a crash even when we know it’s coming? 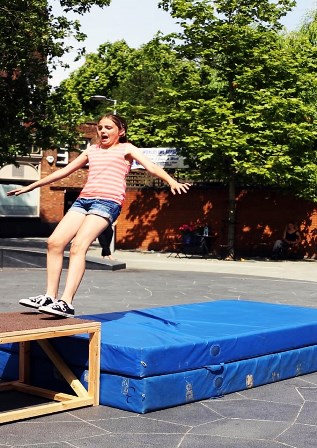 Some are more nervous than others when it comes to falling (especially when it's backwards). Photograph by Iris Long

Invitation to Fall has been curated into the Museum's 250-seat Weston Theatre, where you can choose either to participate and fall flat on your face on to a mat in front of an audience, or to watch others fall from the comfort of your own seat.

The piece is the idea of live artist, filmmaker and sculptor Amy Sharrocks whose touring Museum of Water has had tremendous success over the past 18 months.

“In 2013 I won one of the first Sculptureshock prizes from the Royal Society of British Sculptors, and made a summer-long residency there on falling,” she said.

“I first made Invitation to Fall with them in the open air, right on the Kings Road and now the Museum of London has made a lovely curation of it, putting the fall back at the heart of the Sherlock Holmes story and siting it in their theatre, highlighting the spectatorship of falling: the difficulties of letting others fall, complicit with the complex concerns of schadenfreude and surveillance. 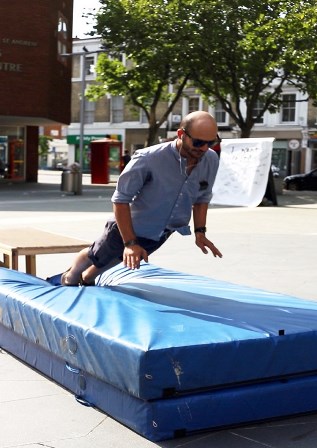 A forward flop on the Kings Road. Photograph by Iris Long

“This will be my first artwork in a theatre, and I am very excited about it.”

Sharrocks’ works, including SWIM (2007) when she invited 50 people to swim across London from Tooting Bec Lido to Hampstead Heath Ponds and London is a River City (2011), where she held a series of public walks tracing seven of London’s buried rivers, are triumphs in public engagement.

From March 2013 the Museum of Water – a commission by the London School of Hygeine and Tropical Medicine to mark the bicentennial of John Snow’s birth, who was instrumental containing cholera – called on the public to share their water and stories and has been a great success with unusual samples and tales.

“As with all my work, it is open to all abilities and all ages, so we are offering assisted falls throughout the evening. Last time a man with one leg came for an assisted fall, which was extraordinary. A lot of this piece is conversational, as is often the way with my work, and we ended up talking a lot about his time in the army.”

Guests can even dust their drinks for prints and find out how to profile potential psychopaths with Forensic Outreach.

The event takes place from 7pm 9.45pm costs £12 and you can book a fall by emailing [email protected]