Is this the Age of the Independent Museum?

The economic contribution made by the UK’s independent museums has often been over-looked, but a recent blog by Matthew Tanner MBE, Chief Executive of ss Great Britain Trust & Brunel Institute and Chairman of the Association of Independent Museums, which represents 1,000 members in UK, highlights how new evidence shows these self-sufficient, volunteer-led organisations have been thriving even in these tough economic times, through innovation and a focus on their visitors' needs, and are now leading the way in the reshaping of the museum sector as a whole.

The recently published ‘Economic Impact of Museums in England’ report from Arts Council England has revealed some surprising results that show how Independent Museums contribute to the overall museum sector with 20,000 people employed by independently run museums helping to generate 45% of the overall economic impact of the sector.

Matthew Tanner was invited by the Arts Council to share his insights on the report’s findings and to give his perspective on what the future holds for the growing numbers of independents across the UK. The report was released on the same day that Arts Council England also announced significant funding of £17.5 million of new investment in English museums with AIM receiving £900,000 to support its new ‘AIM Hallmarks and Investing in Independence’ programme over the next three years.

Is this the Age of the Independent Museum? By Matthew Tanner

The Economic Impact of Museums in England, published on 2 March by Arts Council England (ACE), may have had to hide its light under the bushel of the synchronous announcement of the ACE Resilience grants awards, but when the dust has settled it should catch everyone’s attention. This new research by TBR reflects a picture of the museums sector in England that not everyone would have expected. It shows that independent – rather than publicly funded – museums and galleries are not only by far the most populous type of museums (making up 60% of the total number of museums in England), but they also employ half the workforce in the sector (some 20,000 people), and create and deliver 45% of the economic impact – more than any other part of the sector. In fact, when combined with the DCMS-funded national museums, together they account for a massive 77% of the economic impact of the whole sector.

Why should this be unexpected? On reflection, the image of a typical independent museum as something small, frumpy and local, run on a shoestring, exhibiting low professional standards, and somehow not amounting to much in the way of social or economic impact, has long passed away. Instead many Accredited local museums and special interest museums alike continue to flourish and serve their communities and their tourists, while it is also true to say that many larger independent museums have risen from some such smaller beginning to become significant players as professional museum operations and important tourism businesses too. 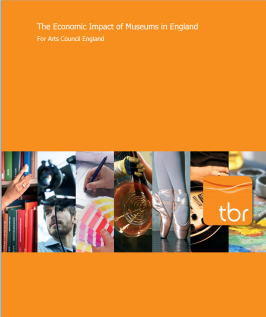 This report shows that independents are now frequently mature organisations, with a sophisticated approach to their operation, using a range of subsidiaries and organisation styles to work effectively. The report also demonstrates the variety and ingenuity that such museums display in earning income to support their charitable activities. They range from widespread activities, such as venue hire and retail, to the more unusual, such as commercial partnerships in computer gaming, model making and filming.
It seems to me that it’s within our vibrant independent sector that much of this innovation is flourishing. Here, a business-like and risk-taking approach is reaping rewards that can be seen not just in economic benefits, but in the many other ways that museums play crucial roles in their communities.

So what does this mean? That this is ‘the Age of the Independent’ is a recent coinage, but it somehow feels right. AIM is poised this year to publish its new AIM Hallmarks of a Prospering Museum that will give a new and simple framework to being a successful independent museum or gallery. Its new Investing in Independence resilience grant received from ACE will put significant new funds into nurturing and supporting the very culture and behaviours that are making these independent museums thrive.

But it is also an age when many Local Authority museum services are being hit and hit hard with savage budget cuts, and quite a few are looking at the possibilities of moving into independent trust status. It is not a panacea, or a sure way to secure new funding. That much seems obvious – it is much harder graft than that! Nevertheless, it will be increasingly essential not only to welcome such moves, but to nurture them. To nurture and support them in a smart transition process and help them off in this new direction without chains holding them back. It will take time, but it can embed in them a creative, entrepreneurial and risk-taking culture adapted for their particular circumstances, but that is also among the key hallmarks of prospering independent museums and galleries.