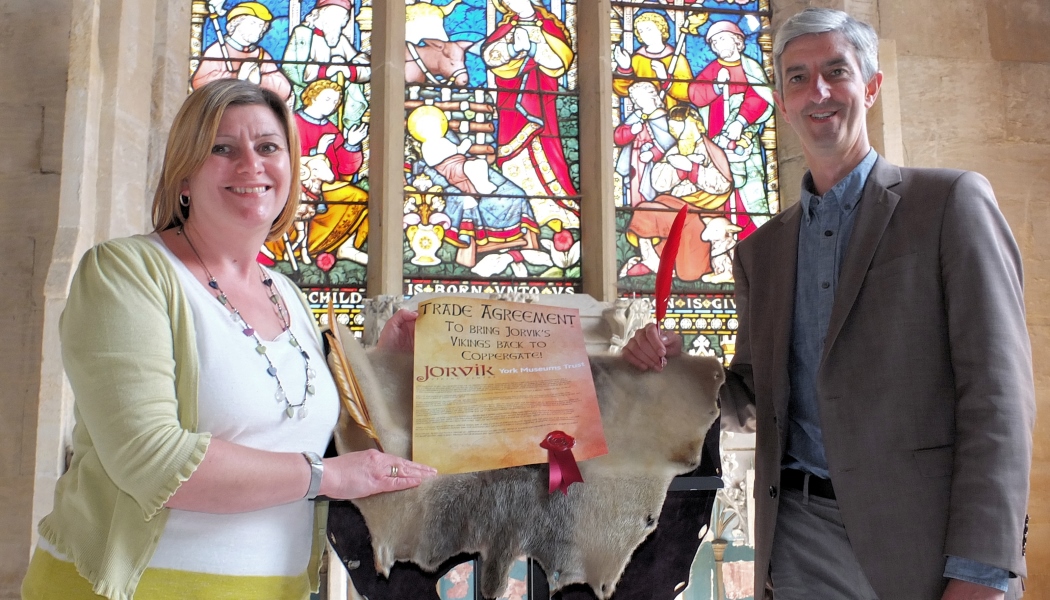 The JORVIK Viking Centre was one of the many homes and businesses in York that suffered substantial flood damage in December 2015 and currently remains closed as a major refurbishment is underway with the aims of re-open by spring 2017.

The new JORVIK: Home & Abroad exhibition at York St Mary’s, which will run until early 2017, focuses on the trade that made York a powerful centre of international commerce, with its navigable rivers and fertile land providing a perfect hub for travellers and settlers alike, creating a melting pot of cultures and ethnicities.

“Even though JORVIK Viking Centre itself has been closed for over five months, we are still getting hundreds of people coming along ever day with a thirst for Norse knowledge, so having a fantastic exhibition that tells a key part of Jorvik’s commercial story literally in the adjacent building is a great way of keeping the story alive, whilst we continue to rebuild and re-imagine the attraction beneath their feet,” said director of attractions for York Archaeological Trust, Sarah Maltby. “We’re very happy to be working with York Museums Trust and to be able to present a JORVIK exhibition in York St Mary’s, which is such a wonderful space.”

JORVIK: Home & Abroad will feature a wide range of artefacts taken from York’s Viking collections, alongside tableaux taken from the JORVIK Viking Centre displays which remained above the waterline during last December’s floods. The exhibition will also provide a temporary home for JORVIK’s team of historic costumed interpreters, who will be sharing their knowledge with visitors.

“The Viking history of York is world famous thanks to the success of the JORVIK Viking Centre and we are delighted to be working in partnership with them on this exciting exhibition. It makes perfect sense to use York St Mary’s as a venue for a new Viking experience while the centre is closed as many of the finds were discovered very close by,” said Mike Woodward, chief operating officer for York Museums Trust. “We hope to build on the partnership for a year of the Vikings in 2017, with the JORVIK Viking Centre reopening and a major exhibition on the Viking history of Britain being planned at the Yorkshire Museum.”

This is not the first time that the Vikings have invaded the building next door; in 2000, when the original time cars were replaced as part of a major redevelopment of JORVIK Viking Centre, many of the key artefacts were displayed within the former church alongside artist’s impressions of how the new attraction would look once it re-opened.

Jorvik: Home & Abroad will run from June 25 2016 until late February 2017, when the artefacts start to return to JORVIK Viking Centre.

Shortlist revealed for Art Fund Museum of the Year 2021