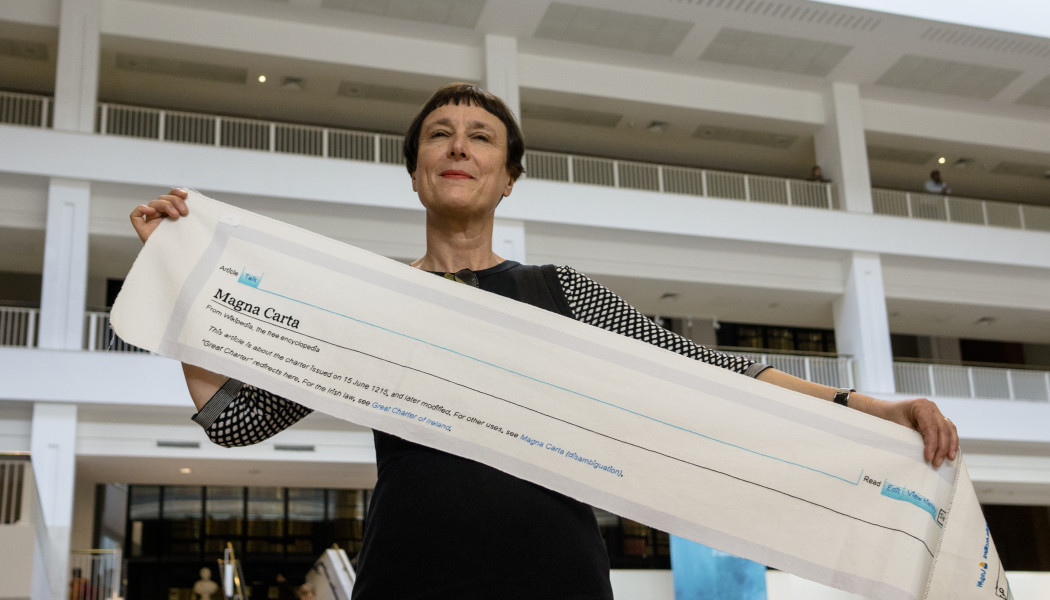 A 13 metre-long embroidery by British artist Cornelia Parker, in collaboration with judges, embroiders, Jarvis Cocker and 40 prisoners, will show how the document look in the digital age

Stitched by more than 200 carefully selected individuals, many of whom have a connection to civil liberties and the law including almost 40 prisoners, the artwork depicts the Magna Carta Wikipedia page as it appeared last year on the document’s 799th birthday. The Wikipedia article regularly attracts more than 150,000 page views each month and is constantly being amended by users of the website as the debate about Magna Carta and its legacy ebbs and flows.

Each stitching words or phrases significant to them, the list ranges from director of Liberty Shami Chakrabarti (stitching ‘Charter of Liberties’) and Baroness Doreen Lawrence (‘justice’, ‘denial’ and ‘delay’) to Lord Igor Judge and Lady Judith Judge (‘Habeas Corpus’ – a phrase rejected by one of the many prisoners stitching the embroidery), and from Wikipedia founder Jimmy Wales (‘user’s manual’) and Edward Snowden (‘liberty’) to Jarvis Cocker (‘Common People’).

“I wanted to create a portrait of our age”, said Parker. “All these people have their own opinions about democracy today and I thought carefully about the words they should stitch. For instance, Baroness Warsi, Eliza Manningham-Buller, Julian Assange and numerous prisoners have all stitched the word ‘freedom’, but all have different relationships to it.”

“This is a snapshot of where the debate is right now,’ says Parker. ‘Echoing the communal activity that resulted in the Bayeux Tapestry, but on this occasion placing more emphasis on the word rather than the image, I wanted to create an artwork that is a contemporary interpretation of Magna Carta.” 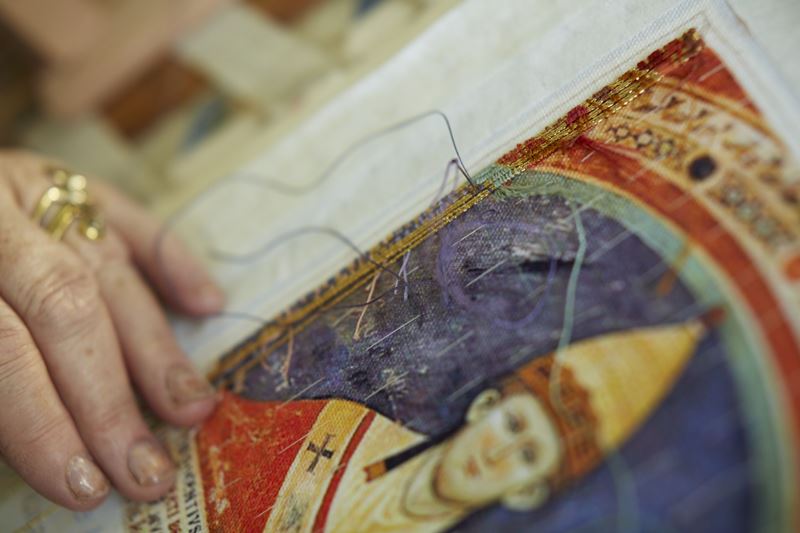 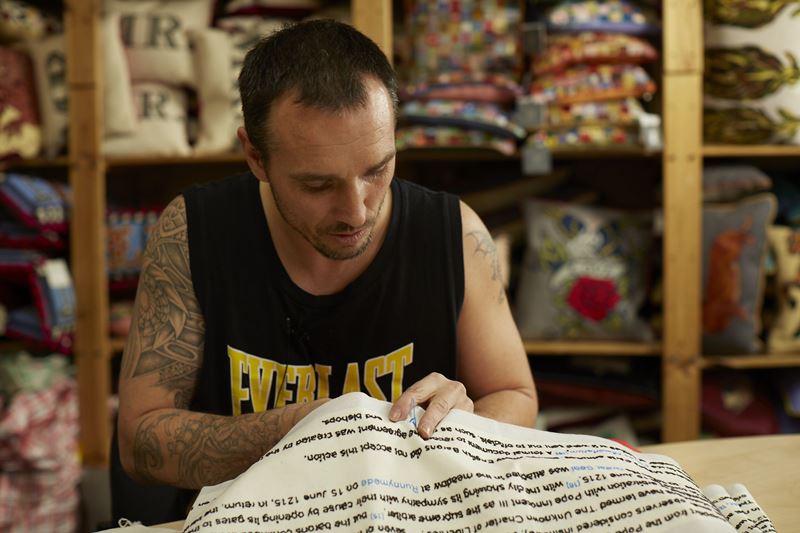 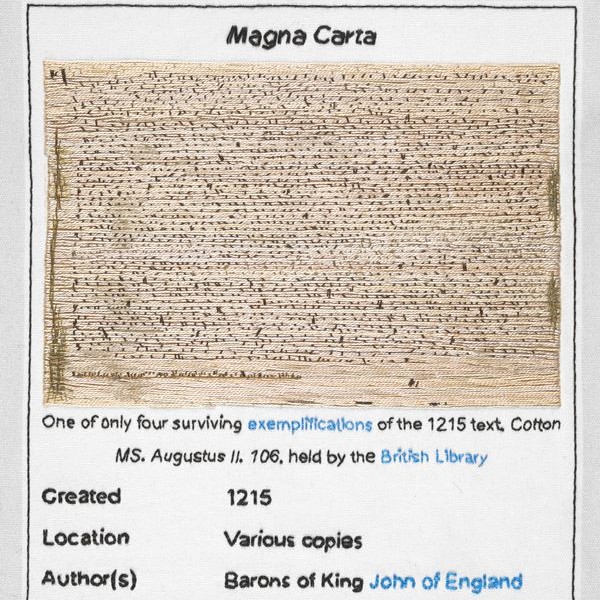 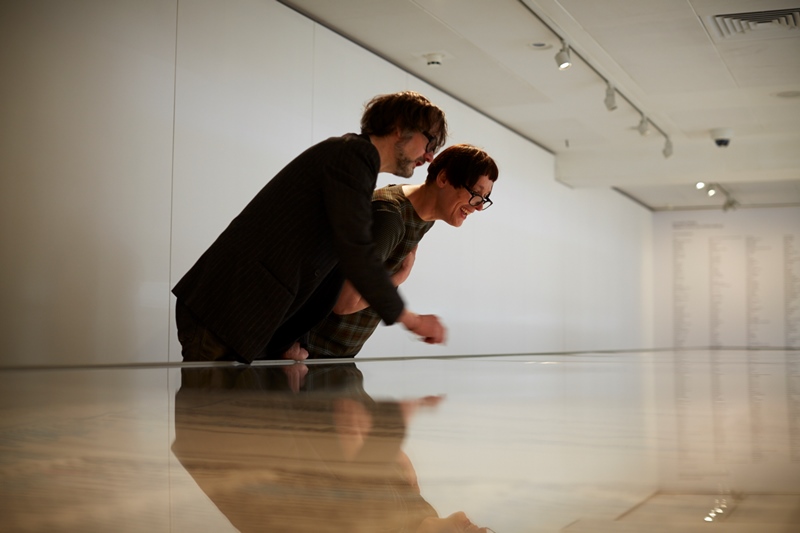 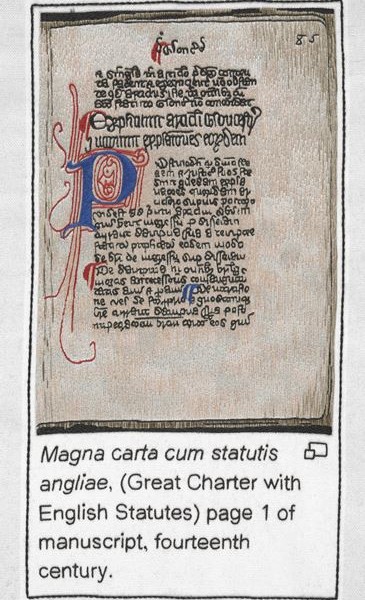 The bulk of the text of the Wikipedia page has been embroidered in various prisons by inmates under the supervision of Fine Cell Work, a social enterprise that trains prisoners in paid, skilled, creative needlework. The detailed pictures, emblems and logos that punctuate the text have been fashioned by highly accomplished members of the Embroiderers’ Guild, a national charity that promotes and encourages the art of embroidery and related crafts, alongside embroiderers from the Royal School of Needlework and the leading embroidery company Hand & Lock. “I love the idea of taking something digital and making it into an analogue, hand-crafted thing”, said Parker. “I wanted the embroidery to raise questions about where we are now with the principles laid down in the Magna Carta, and about the challenges to all kinds of freedoms that we face in the digital age. Like a Wikipedia article, this embroidery is multi-authored and full of many different voices. ”

Magna Carta (An Embroidery) was commissioned by the Ruskin School of Art at the University of Oxford in partnership with the Library and is part of a major programme of events, exhibitions and digital projects at the Library examining Magna Carta in this 800th anniversary year.  It runs alongside the Library’s largest ever exhibition Magna Carta: Law, Liberty, Legacy (open until 1 September) and on 15 June, exactly 800 years after Magna Carta was sealed.

Roly Keating, Chief Executive of the British Library, said: “For visitors to the British Library this summer, Cornelia’s piece will be a wonderful surprise – an object of great craft and beauty, that offers a typically generous and original reflection on what Magna Carta means to different people in the digital age.”

Also tomorrow (15 June), the Library will present the results of ‘Magna Carta: My Digital Rights’, a pioneering schools project which asked 11-18 years to write a clause articulating the kind of web they want in the 21st century.  The students’ clauses will be published on 8 June, before the wider public is invited to choose their favourite ten clauses to be presented as a ‘Magna Carta for the Digital Age’ for the anniversary date.

Magna Carta (An Embroidery) is on display until 24 July at the British Library.