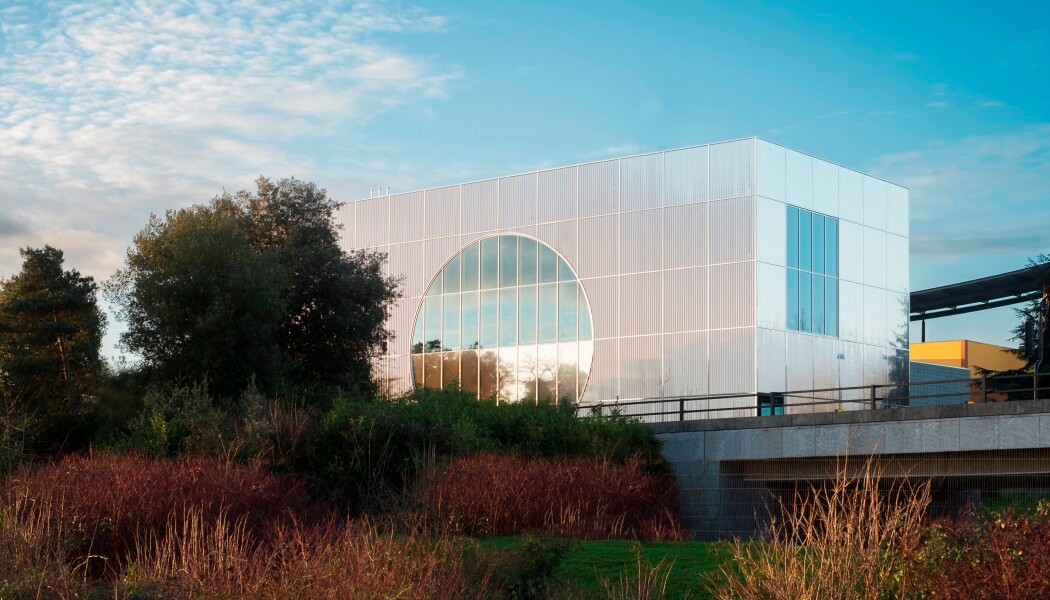 Main Image: The new new steel-framed structure adjoining and merging with the original building at MK Gallery. Photo courtesy of 6a
Share

The new MK Gallery extension in Milton Keynes will open to the public tomorrow (16 March) and together with the 1999 structure will now provide five exhibition galleries, a large learning and community studio and a flexible auditorium

The new MK Gallery has more than doubled its size with the addition of a new steel-framed structure adjoining and merging with the original building. According to the gallery, Milton Keynes – a ‘new town’ built in the 1970s – is one of the fastest growing ‘cities’ in Europe with one of the strongest economies in the UK, partly due to its central location between Birmingham and London and excellent transport links. However, despite this, Milton Keynes has been designated as a ‘cultural cold spot’ and the new MK Gallery aims to revive the ambitious, innovative and generous spirit that drove the Milton Keynes Development Corporation.

“Our ambition has been to create a building where the art centre and the social spaces come together in what we believe is a rare example of collective authorship across disciplines, where art, architecture and design are interchangeable,” said Anthony Spira, Director of MK Gallery. “In doing so, we are proposing a new kind of accessible art centre, which pays tribute to and tells the story of Milton Keynes, fully engaged with playful ways of seeing and definitively open to all.” 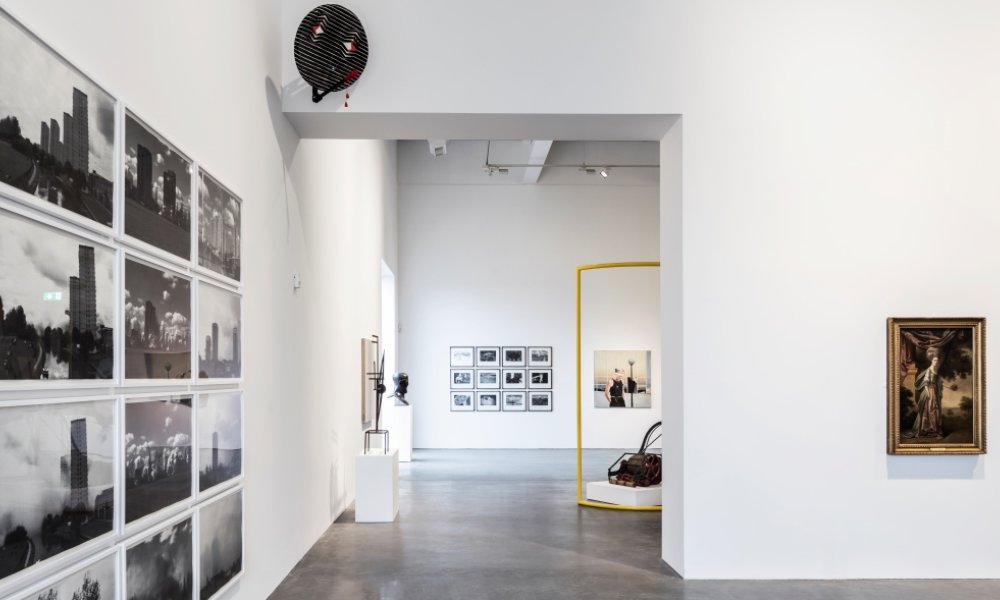 The new MK Gallery is free to enter and has been designed by 6a architect, It receives regular core funding from Arts Council England as a National Portfolio Organisation and Milton Keynes Council, and is a member of Plus Tate network. The inaugural exhibition, The Lie of the Land, is, says the curators ‘an ambitious show spread across all five galleries curated by MK Gallery Director, Anthony Spira, with Sam Jacob, Claire Louise Staunton, Fay Blanchard, Tom Emerson, Gareth Jones and Niall Hobhouse’. 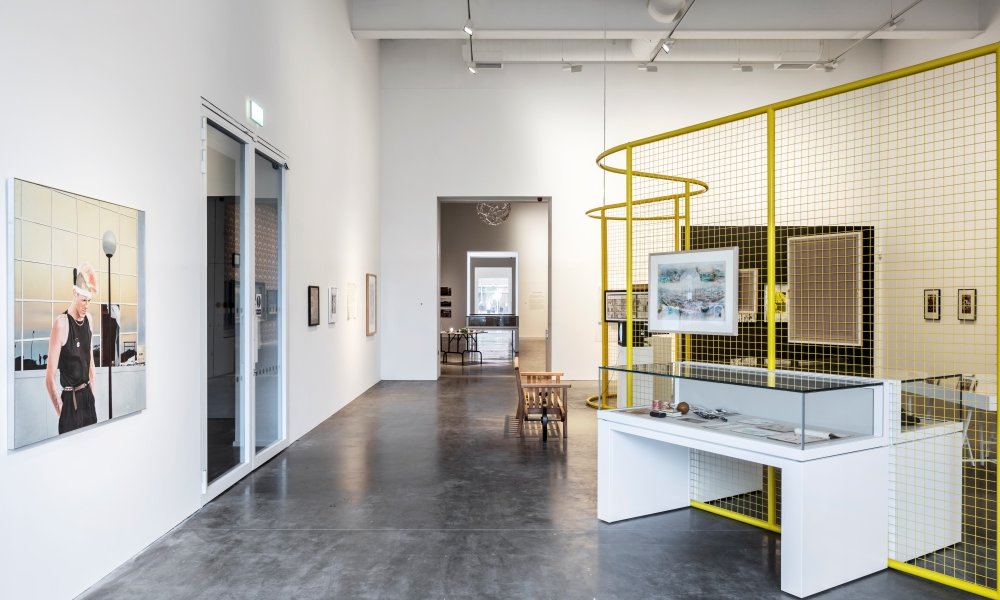 The exhibition is designed as a ‘kind of cabinet of curiosities’, the curators say, ‘that places Milton Keynes and the new gallery in a playful context’. It looks at changing attitudes towards leisure, culture and landscape over more than 250 years with 85 artists, architects and designers, including Thomas Gainsborough, J.M.W Turner and Joseph Paxton, Yinka Shonibare MBE, Jeremy Deller and Bridget Riley all placed alongside retro items such as a vintage picnic basket, one of the earliest lawnmowers, Gertrude Jekyll’s gardening boots and a banner from Greenham Common.

“The Lie of The Land highlights campaigns to democratise space, from the 17th century egalitarian Levellers to the 1930s Ramblers,” says the curators. “We look at how people use public space, and the communities that have been excluded through structures of race, gender, disability and class, explored in works by artists including Jo Spence, Rose Finn-Kelcey and Ingrid Pollard.” 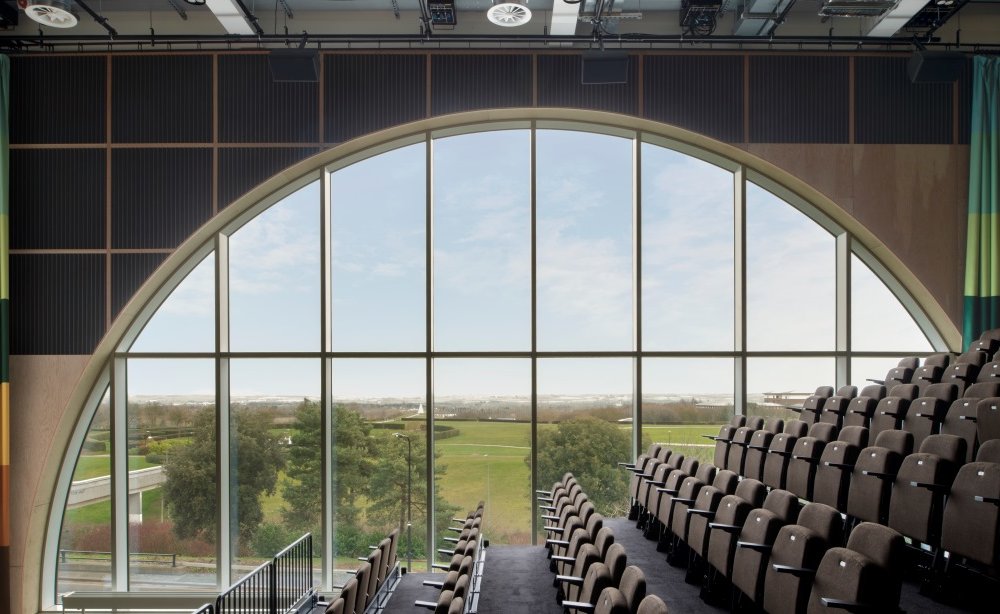 The Sky Room, an auditorium on the upper floor, with 150 retractable seats, and views over Campbell Park. Photo courtesy of 6a

Integrated within the new scheme, artists Gareth Jones and Nils Norman were commissioned, in collaboration with 6a architects and graphic designer Mark El-khatib, to create City Club, a sequence of new public spaces in and around the new MK Gallery. Inside, these include the foyer, café/bar and Sky Room. Outside, they include a playscape, a garden and a new façade for the existing gallery building.

The new entrance, with a colour scheme that revives the original gallery ‘sandstone and terracotta’ facade of 1999, features a large red neon heart, the first ever logotype for Milton Keynes, and a double headed axe, signs which are part of a homage to the city’s iconic original design. 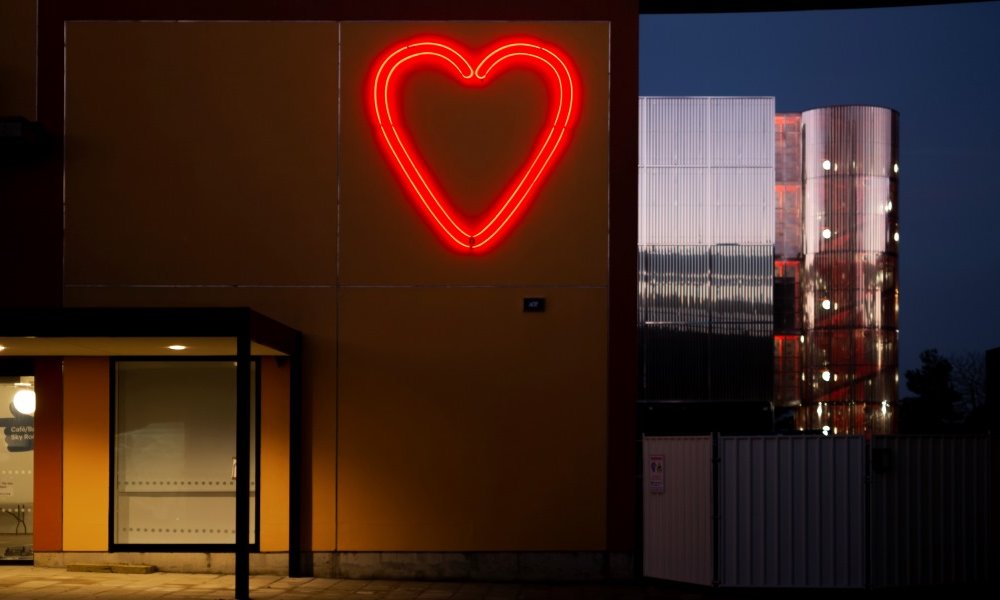 The development provides for major exhibitions both contemporary and historical, films, music, performance, family events, workshops, and social spaces open free to all.