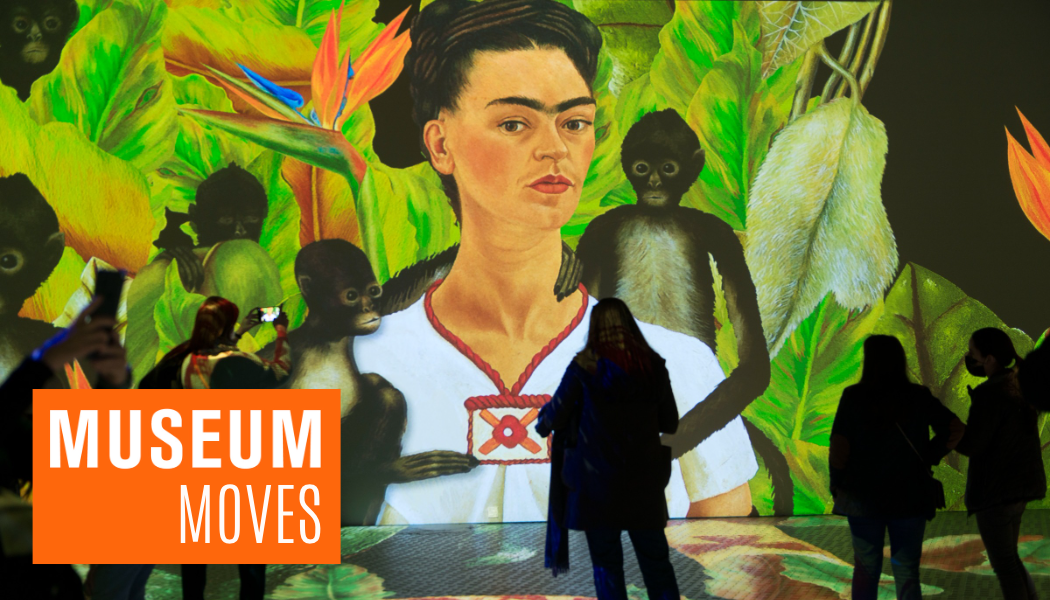 The Brontë Society has announced the appointment of Rebecca Yorke as Director of the Brontë Parsonage Museum. Yorke, who first joined the Museum in early 2015 in a marketing and communications role, has been a member of the organisation’s senior management since 2016 and has held the post of Interim Director since June 2021.

The new chair of trustees at Scarborough Museums and Galleries has been announced as renowned Egyptologist, Professor Joann Fletcher. Professor Fletcher lives in Scarborough and is based in the Department of Archaeology at the University of York The appointment follows Fletche recently becoming a trustee of the organisation. Professor Fletcher is also a consultant and advisor for Harrogate Museums and Arts, the Museum of Wigan Life and Barnsley Museums, where she is also guest curator and patron of Barnsley Museums & Heritage Trust.

The Coventry City of Culture Trust has announced the appointment of Chris Michaels as the first Director of immersive digital gallery The Reel Store. In the position Michaels will be responsible for the strategic direction and curatorial leadership of the gallery. Michaels was previously Director of Digital, Communications and Technology at the National Gallery, and is a Senior Visiting Research Fellow at King’s College London and a Creative Industries Policy and Engagement Fellow at the Arts and Humanities Research Council.

The Millennium Gallery in Sheffield has a new exhibition exploring artists’ fascination with water and our relationship to it. ‘From Sky to Sea: Artists and Water’ includes painting, photography and works on paper by Linda Benedict-Jones, Paul Cézanne, Walker Evans, Fay Godwin, David Hockney, Eric Ravilious, Simon Starling, and JMW Turner. Visitors will also have the chance to see a two-metre series of woodcuts by Titian, which will be on public display for the first time. Over 90 historic and contemporary works are included in the exhibition which runs from 24 November 2022 – 12 March 2023.

Touring exhibition ‘I Grew Up 80’s makes its next stop at Dorset Museum. The family-friendly exhibition features over 200 pop culture objects, including a Mark 1 model Golf GTI, on loan from the National Motor Museum, Beaulieu. Dorset Museum is the first to have the car displayed within the exhibition. Runs 3 December 2022 – 26 February 2023.

A new solo exhibition of anthropomorphic creatures by artist Annie Montgomerie is now on view at Yorkshire Sculpture Park (YSP) until 26 February 2023. The creatures in ‘Hand Me Downs’ make it Montgomerie’s largest exhibition to date with 30 unique creatures which evoke “the bittersweetness of childhood and the emotions intertwined in the early stages of life.”

The Queen’s House, Greenwich, is to host a new exhibition on the founders of English marine painting, 350 years after their arrival in England. ‘The Van de Veldes: Greenwich, Art and the Sea’ will open at the Queen’s House, the home of the studio granted to Willem van de Velde the Elder and his son, Willem van de Velde the Younger, by Charles II. Exhibits include a newly conserved four metre painting, A Royal Visit to the Fleet, which dates back to the 1670s.

Opening this November at Greenwich’s Old Royal Naval College, a brand-new exhibition explores the life and work of renowned 19th-century naval surgeon and physician, Sir William Beatty. Marking 200 years since Beatty took up the post of Physician at the Royal Hospital for Seamen in Greenwich, Blood and Battle: Dissecting the Life of William Beatty, takes a deep dive into Beatty’s career and the wider world of medicine in Nelson’s navy.

A new museum in Perth’s City Hall has revealed its name, decided after a public search. Set to open in Spring 2024, the ‘Perth Museum’ in central Scotland will tell the story of Perth & Kinross’ ancient roots through social and natural history.

‘Technicians: The David Sainsbury Gallery’ has now opened at the Science Museum. The permanent interactive gallery, dedicated to the role played by technicians, has been created in collaboration with Marvel Studios, the NHS, National Grid, and the University of Sheffield Advanced Manufacturing Research Centre.

Arts Council England (ACE) has announced the 77 museums which have been granted National Portfolio Organisation (NPO) status as part of its 2023-26 investment round. The museums selected have been provided with a total £36.5m, the largest recipient of which is The Tyne & Wear Archives & Museum (TWAM) at £3.3m.

Tyne & Wear Archives & Museums (TWAM) has also received a grant of £24,980 from the Peter Sowerby Foundation to support arts and heritage activities for older people in residential and clinical care settings. The grant will allow TWAM’s communities team to create bespoke online training for health and social care professionals.

Porterbrook, a British rolling stock company which owns almost a quarter of the national passenger rail fleet, has announced significant support for the National Railway Museum with a £2.5m sponsorship agreement for the new ‘Railway Futures Gallery’ – a key component of the museum’s Vision 2025 masterplan.