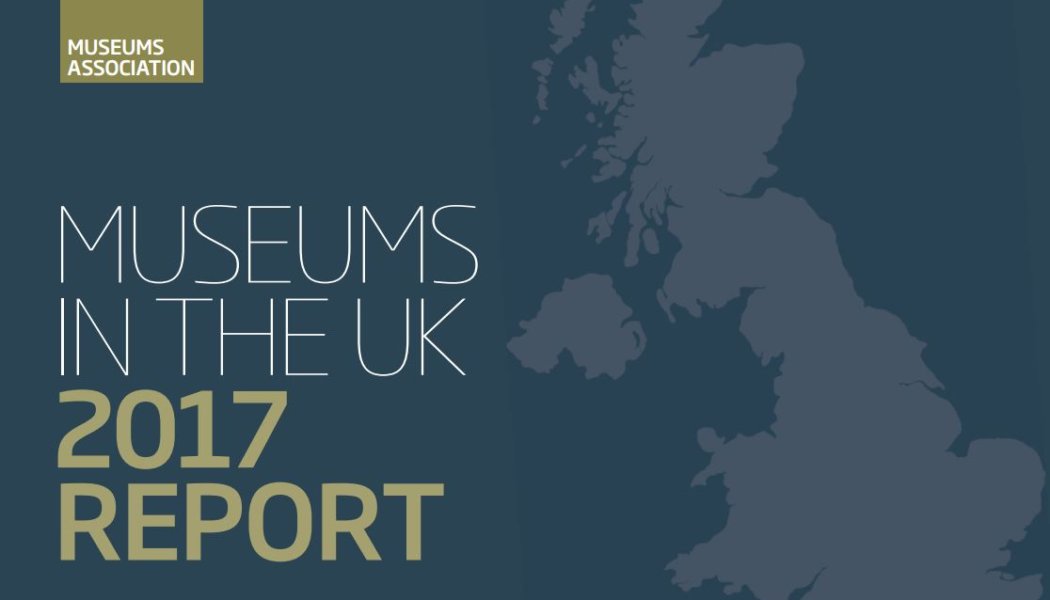 The Museums Association has published its Museums in the UK: 2017 Report this week

The Museums in the UK: 2017 Report looks at the performance and activity of museums during the financial year 2015/16.

Between September and November 2016, museums were asked to complete a survey based on the type of museum; visitor numbers and engagement; museum finances; volunteers and staff; education work; and challenges and opportunities for the future. In total 453 respondents completed the survey, representing 553 museums roughly 22 per cent of the estimated 2,500 museums in the country.

In order to gain a broader overview, the MA worked in partnership with the Museum Development Network in England, and asked museum colleagues and partners across the UK to distribute the survey among their networks and extend its reach as far as possible.

The survey delves into museum funding and found that 25 per cent of respondents’ funding had fallen but 35 per cent reported an increase in overall funds. However, this differs from region to region and the report showed that 64 per cent of museums in Wales reported a cut to public income, compared to 50 per cent in Scotland, 43 per cent in Northern Ireland and 21 per cent in England.

It also reported that a quarter of museums said full-time equivalent staff had decreased in 2015-16, compared to the previous year, while the same proportion reported an increase. However, the results varied widely between museum types. The hardest hit by year-on-year staff cuts were independent former local authority museums (58 per cent), national museums (55 per cent) and local authority museums (26 per cent).

“We know that people who work in and with museums are committed and passionate about what they do but we also know that they are being asked to do more and this survey points to the fact that cuts have led to a loss of expertise and talent,” said Sharon Heal Director, Museums Association. “At the same time there has also been a marked growth in volunteering which contributes a significant value to our museums. The survey shows that museums have worked hard to generate additional income in often ingenious ways, but sometimes this is not enough. In the past year museums in Lancashire and Kirklees have closed and many publicly funded museums face further cuts to their budgets.”

The report also gathers information about admission charges and states: “Admission fees are a valuable source of income for many museums, but this benefit can be outweighed by falls in visitor numbers.” As part of the MA’s ongoing record of closures the report maps out museum closures and while it mentions museum renovations, of which 34 per cent of respondents said they had renovated or opened new galleries, it does not provide information about new museum openings or re-openings.

Museums remain hugely popular with the public across the UK. Almost half of all museums reported a year-on year increase in visitor numbers. This reflects positive government statistics on museum attendance.

At least 64 museums in the UK have closed since 2010, with 15 museum closures in 2016 alone. The majority of closures are the result of reduced public funding.

Museums of all types are succeeding in efforts to increase their earned income and fundraising, but require time and investment to maintain this momentum.

Most museums reported stable staff numbers, with an average of 12 FTE staff per museum. However, publicly funded museums were substantially more likely to report a year-on-year decrease in staff numbers, with 26 per cent of local authority museums, 55 per cent of national museums and 58 per cent of independent former local authority museums reporting staff cuts. • There are widespread concerns about low morale and the loss of experienced staff across the UK.

Museums are prioritising public-facing services in the face of cuts, such as public events, temporary exhibitions and school visits. • One in 10 museums reported not having its own website or not using social media. • Museums are increasingly working with disadvantaged and under-represented groups to meet the challenges of a divided and unequal society.