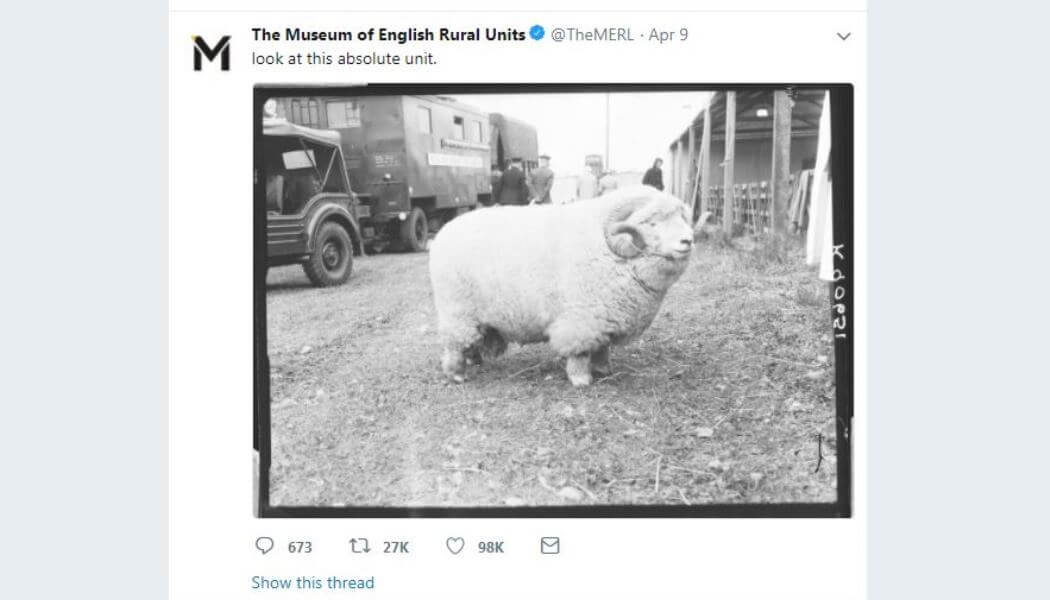 ‘Look at this absolute unit’, a five-word tweet and a photo of an Exmoor Horn aged ram from Somerset posted by the Museum of English Rural Life (Merl) @TheMERL – or The Museum of English Rural Units as it has been renamed on Twitter – has been retweeted almost 28,000 times (at the time of writing), liked by fast-approaching 100,000, created more than 7,000 new followers and built a springboard from which to promote its visitor offer

The tweet came from Adam Koszary, project manager at the The Merl at 2.52pm Monday 9 April. In a blog for Medium Koszary explained that this was part of a series of animal-picture-related tweets from the museum that take on a humorous tone without damaging the credibility of the organisation. Essentally it’s about engagement and sharing the collection.

“And why it went viral doesn’t take rocket science,” he said in the blog. “It’s a good photo, a cute animal and a relevant use of a meme. Throw in a few lucky retweets from influencers, and we were away.”

But he goes on to say that the real success came after the tweet. “I knew that for something to become truly viral it didn’t just need retweets, it needed to be talked about.”

And then begins a huge thread of conversations and comments sharing sheep puns and recommendations for names, which ultimately leads to a week-long promotion of the museum.

The result, says Koszary, is that the tweets got collected into a Moment by Twitter and broadcast to the world, exposing not just the original tweet but a whole host of them.

Subsequent tweets would mention the fact that the museum has other objects and were able to reference the original tweet in a comical way (one tweet simply had the hashtag #sorrynotsorry). Other tweets show that the curatorial team have gone back into the archives to find more about the original photo and its details. And now a new tweet links to a blog by Dr Ollie Douglas, Curator of MERL Collections giving a brief history of the male breeding ram (or absolute unit).

So, the museum, as Koszary puts it ‘will of course plan on milking this meme for as long as we can, too.’ He said they then expect the meme to die ‘and we’ll go back to a sort of business as usual and hope to do it again’.

However, one of the legacies of this tweet is that many people on twitter have become aware of the museum that perhaps were not before with a large number saying they ‘must visit’. There’ll be no ramifications here (#sorrynotsorry). Just good publicity. Job done!

Dr Ollie Douglas will be talking at this year’s Museums + Heritage Show on 17 May. The talk, with colleague Isabel Hughes, is entitled: Open Wide – developing open access to your object stores.