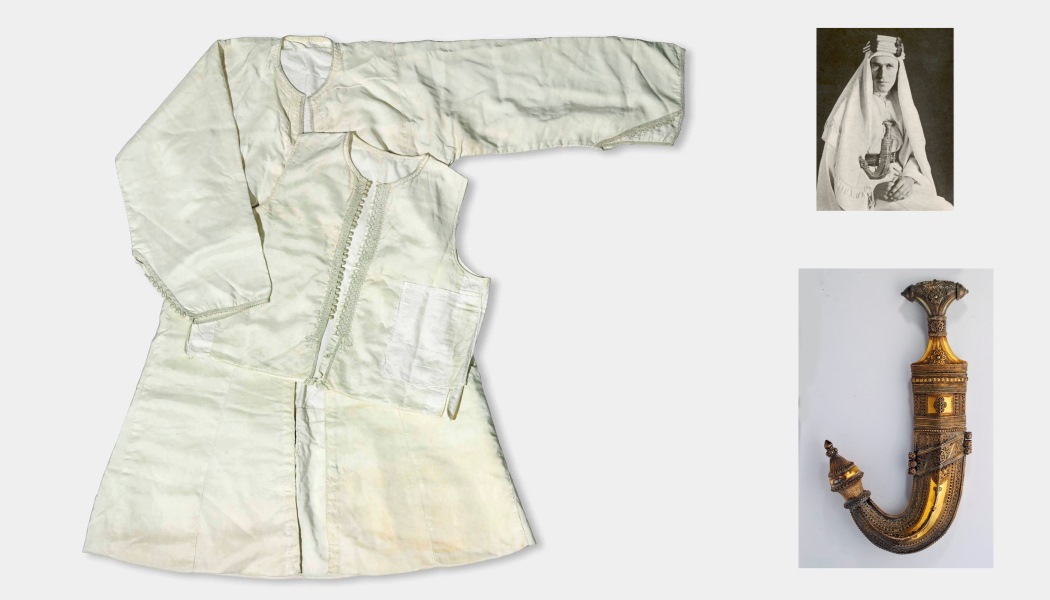 The National Army Museum has saved TE Lawrence’s dagger, robe and kaffiyah for the nation thanks to two grants from the National Heritage Memorial Fund (NHMF) totalling £113,400

Lawrence was given the dagger, known as a jambiya, by Sherif Nasir in 1917 after the victory of the Arabs at Aqaba in modern day Jordan. It had been sold to an overseas buyer in 2015, but an export licence bar was made on the recommendation the Reviewing Committee on the Export of Works of Art earlier this year. The dagger was secured by the National Army Museum with a £78,400 grant from the NHMF.

TE Lawrence’s military exploits in WWI in leading the Arab Revolt and his diplomatic his efforts attracted some distinction and has led him to have one of the greatest legends of any British soldier. His approach to working with the Arab tribes, of full integration and the abandonment of British dress, delivered great success, also led to him having immense cultural impact in the century since his wartime achievements.

Wearing a jambiya was customary for men at the time and would have helped Lawrence further ingratiate himself with his Arab allies. It helped complete his transition from the khaki-clad British soldier to Arab leader. As impressive as his military feats were, the image of Lawrence wearing the robes and dagger was one that he and others cultivated to greatly further his reputation and seal his legend in popular culture.

The robe was one of two given to the mother of Arthur Russell, who enrolled in the Tank Corps with Lawrence.  Lawrence told her to cut them up and make dresses out of them but luckily Russell managed to save this one from her scissors. The kaffiyah was given to the artist Cosmo Clark by Lawrence after he sat for a portrait in 1922. Clark was one of the illustrators for Lawrence’s book, The Seven Pillars of Wisdom and Revolt in the Desert.  Both items were acquired thanks to a further NHMF grant of £35,000.

“Lawrence is an iconic figure in the history of the First World War and the Middle East,” said Dr Peter Johnston, Head of Collections Development and Review at National Army Museum. “While the Middle East theatre is often forgotten in the popular memory of the conflict, the actions there have had enormous ramifications for the past 100 years. What makes the dagger and robes so significant, and such an important part of British heritage, is the way in which they have featured in the cultural memory and legacy of Lawrence and the Middle East campaign of the First World War.”

The National Army Museum is currently undergoing a major redevelopment that will see a new museum entrance and walls knocked down to create five new permanent galleries, a welcoming café and shop, as well as a range of unique and flexible spaces for hire. The three saved items will go on display in the transformed museum when it reopen in spring 2017.

These items join a diverse range of over 1,200 iconic objects and places which have been safeguarded by the NHMF to the tune of over £300million: