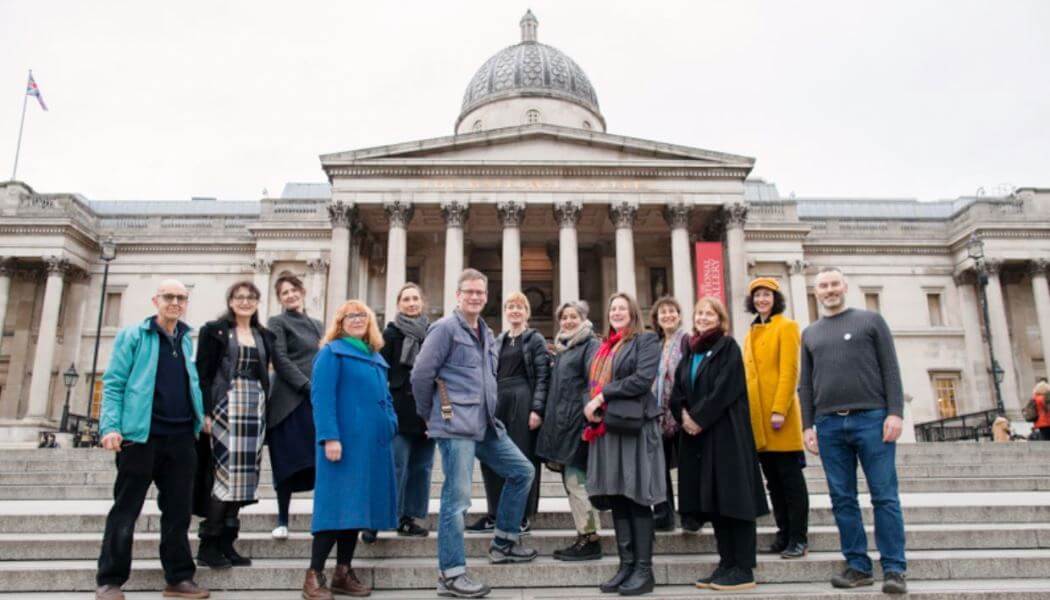 Main Image: Some of the 27 National Gallery educators who have won a case against the gallery at an emplyment tribunal. Photograph by Jo Hone Photography
Share

The National Gallery 27 (NG27) had clocked up collectively 500 years of work at the gallery before they said their existing arrangements were brought to an end in October 2017. However, unlike other workers, they said they had not been given any holiday, sick pay, pension or maternity pay despite having paid taxes through the payroll as employees.

They said they were denied these rights as the National Gallery alleged that they were ‘self-employed’ a position which the Employment Tribunal Judge has found to be “unsustainable”.

The NG27 say in a statement: “The employment tribunal found that the claimants were in fact workers, despite having been denied their legal right to this status by the National Gallery for decades. The tribunal judge concluded that ‘in short, the claimants worked ‘for’ the gallery as members of its team of educators’ despite arguments to the contrary by the gallery.”

Marie van der Zyl, partner at Ince Gordon Dadds LLP who ran the case on behalf of the 27 claimants with her team Julia Whyte and Oriana Williams said: “This is an important case for all those who have unconventional working arrangements. The world of work is changing and there will be many individuals who are unsure of their status and rights. This case gives those individuals hope.”

The National Gallery’s senior management were cross-examined on 4 December as part of a public hearing at the Central London Employment Tribunal.

A statement on the ruling from the National Gallery said: “The gallery welcomes the clarity provided by this decision, namely that the claimants in this case were not employees of the gallery. The gallery had no wish to get involved in litigation in relation to this matter. From the outset we would have welcomed the opportunity to resolve the issue through mediation, but the claimants did not respond to the Gallery’s requests to enable these discussions to begin since the claim arose.

The Gallery has not ‘dismissed’ anyone as part of this process. The majority of the people involved are still providing these services to us on the same basis as previously, whilst others involved in these claims have already accepted either employment or new contracts with us.

It is important to state that this case should not be likened to the ‘gig economy’ debate that has been in the news recently, with legal cases brought against Hermes, Uber and Deliveroo. In fact, the National Gallery situation is exactly the opposite. The ‘gig economy’ cases have arisen out of organisations’ opting to offer people ad hoc employment, zero hours contracts and no opportunity for job security. We have taken a deliberate choice to move towards a model that offers people secure employment, with additional pension and worker benefits. At this time the Gallery is considering the detailed implications of the decision with its legal advisers.”

A statement from the National Gallery Justice group, which set up a successful crowdfunding site to support the claiments, said: “This case is not only important legally but it is also important for our nation as these individuals were the collective face and knowledge of one of the country’s most loved art galleries in central London’s Trafalgar Square. This is not the end of the matter for the claimants who will need to continue to fight their case to ensure that their full rights are acknowledged as a result of this judgment.”

One of the claimants, Karly Allen, who worked for the Gallery for 18 years, said: “This judgement cannot take away the fact that we have lost our jobs and the close relationship with the Gallery which we loved; it does go some way to acknowledge the losses we have suffered and our contribution to the life of the Gallery. We have been supported throughout this part of our litigation by crowdfunding and we would like to thank from the bottom of our hearts all those who have contributed.”