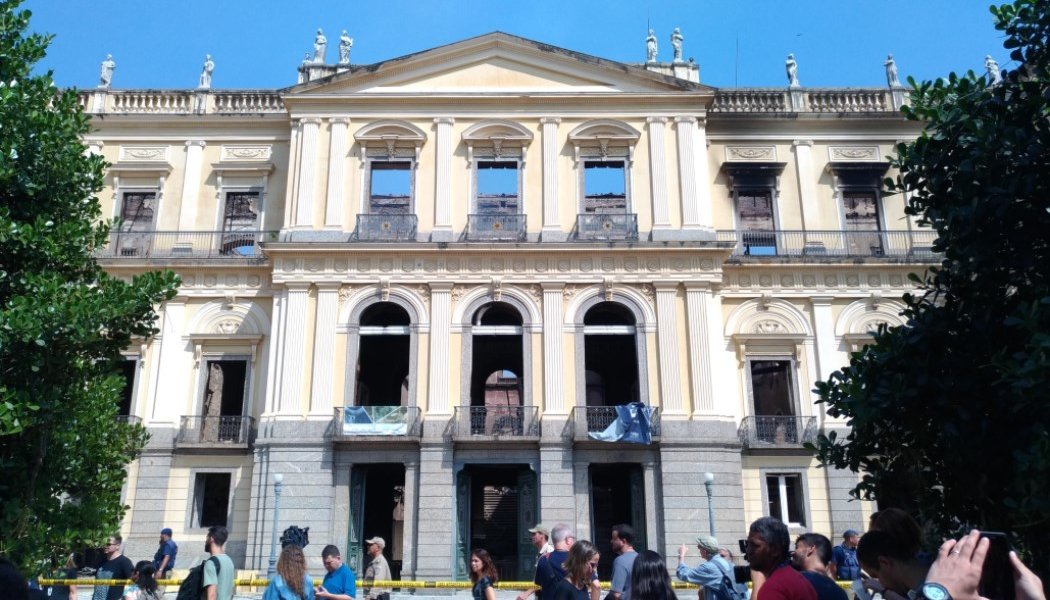 Main Image: The facade of the National Museum of Brazil in Rio de Janeiro, with the burnt out shell just visible through the windows. Photograph by Lu Brito
Share

The National Museum of Brazil has been housed in the former Imperial palace of São Cristóvão since 1902 and celebrated the 200th anniversary of its founding in June but is now mourning the loss of what is believed to be up to 80 or 90 per cent of its 20 million-strong collection, which had made it the largest natural history museum in Latin America and Brazil’s oldest museological institution.

The museum issued a public notice on its website (parts of which are translated here through Google Translate) which said: “Despite the seriousness of the fire, the hope is enormous to find and recover important pieces for the history of Brazil and the world. In addition, we are pleased to know that the annex building and the Botanical Garden were not reached, guaranteeing the preservation of the invertebrate collection, conservation and restoration laboratory, herbarium collection, central library and most of the collection of vertebrates.”

It has also been confirmed that the museum’s famous Bendegó meteorite has also been recovered. The statement also said the museum would like to thank the people of Rio de Janeiro and people from around the world for the thousands of messages of support.

“All this affection only comes to prove, once again, the prominent place occupied by our institution with society.” The statement also said the Ministry of Education had released funds the day after the fire (3 September) of R$10m (£1.8m) for the adoption of emergency measures for the security of the Palace headquarters of the National Museum and R$5 million (£900,000) for ‘the … executive project of recovery of the Museum’.

Have you found fragments of the National Museum Collection? Deliver them to the Central Library in the Quinta Da Boa Vista Botanical Garden, Monday-Friday, 10 am to 4 pm.

Do you have pieces or digital copies that you want to donate? Send information by email to: [email protected]—Subject Line: DOAÇÃO (DONATION).

Do you have photos of the collection? Send by the institution’s link: http://museunacional.ufrj.br/memoria. Help to reconstitute the museum in digital form.

Are you organising a demonstration of support? Let us know: [email protected]—Subject Line: MANIFESTAÇÃO (DEMONSTRATION).

Please do not send photos or materials to other addresses.

Many organisations have come forward to offer support including ICOM, which said it was working to mobilise its Standing Committee on Disaster Risk Management (DRMC), its International Committees for University Museums (UMAC), Documentation (CIDOC), and Natural History (NATHIST), and other pertinent actors in our network to channel all kinds of expertise necessary to overcome this disaster.

One ogrganisation that has pledged its help with tangible objects is the Biodiversity Heritage Library, which said its staff were currently in communication with their colleagues at BHL SciELO in São Paulo to expedite processing of additional volumes of Archivos do Museu Nacional do Rio de Janeiro for the BHL. “We are also exploring additional ways that the BHL’s extensive collection of biodiversity literature can support the work of researchers and scholars of the National Museum.”

Last week there was must consternation that this tragedy was allowed to happen with Brazil’s Culture minister Sérgio Sa Leitão saying it could have been avoided: “This tragedy serves as a lesson … Brazil needs to take better care of its cultural heritage and the collections of its museums.”

This was echoed by Michael Greshko reporting for National Geographic’s who noted that since 2014 the National Museum had not received its full annual budget of $128,000. This year, he noted, the museum received just $13,000. He said funding was so inadequate in late 2017, ‘curators were forced to rely on crowdfunding to support the repair of a popular exhibition hall that had been infested with termites’.

Mayor of Rio, Marcelo Crivella, said it is now a national obligation to “reconstruct [the museum] from the ashes, recompose every detail of the paintings and photos. Even if they are not original, they will continue to be a reminder of the royal family that gave us independence, the empire and the first constitution and national unity.”