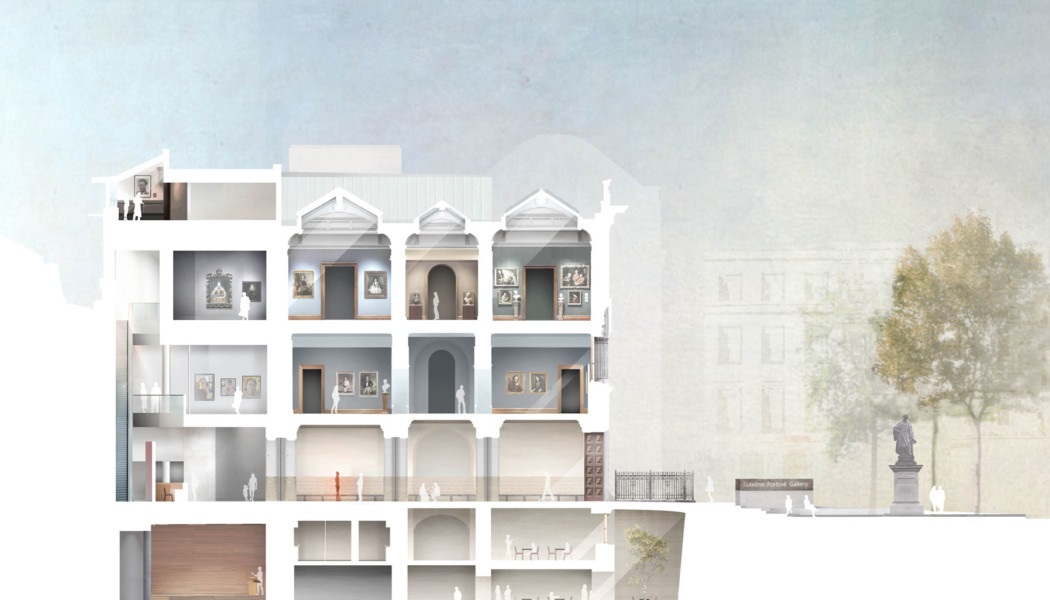 The National Portrait Gallery will close its doors at the end of June 2020 to begin large-scale regeneration work. During the £35.5 million project, which is set be completed in the spring of 2023, 300 artworks from its collection will be distributed to galleries around the UK.

While the ambition of the scheme is plain to see, questions are now being raised over what lies ahead for the site’s employees during the ‘temporary closure’.

The National Portrait Gallery’s Inspiring People project will feature a ‘comprehensive re-display’ of its collection, significant refurbishment to the existing building, the creation of new public spaces, a reimagined visitor entrance and a new state-of-the-art Learning Centre.

To deliver on the plans efficiently while also safeguarding visitors, staff and the site’s artworks, National Portrait Gallery has deemed it necessary to close between 29th June 2020 and spring 2023.

Jamie Fobert Architects has drawn up the plans, with funding having been awarded by bodies including the National Lottery Heritage Fund and Garfield Weston Foundation, which have pledged £9.4 million and £6.5 million respectively. £500,000 has also been committed by the Wolfson Foundation, along with £400,000 from the Foyle Foundation and £350,000 from Art Fund.

The outstanding amount required to fulfil the project’s target will be raised from individuals and public funding, along with support from trusts and foundations. Thus far £32.7 million of the overall £35.5 million fundraising target has already been sourced.

During the closure, around 300 artworks, some of which have seldom left the St Martin’s Place site, will go on tour through a series of partnerships and collaborations with a range of galleries and museums.

Where will the collection go?

The National Programme of Activities, which will see portraits travel the length and breadth of the UK, will include:

Exhibitions featuring the gallery’s artworks will also head to Japan, Australia and the United States during the closure.

“We are delighted to be able to partner with organisations across the UK and internationally to share our Collection to new and existing audiences,” added Cullinan. “We look forward to hearing from other organisations who are interested in working with us during this time, so that we can make the most of this extraordinary opportunity to circulate a national collection as widely as possible in both innovative and collaborative ways.”

The decision to close between 2020 and 2023 has provoked a very pointed response from FDA, a union representing some of the National Portrait Gallery’s senior staff. The closure will “inevitably lead to uncertainty, potential redundancies, and other complications for the museum’s staff,” according to the organisation.

Helen Kenny, FDA’s national officer for culture, said: “We understand that the decision to close outright was a difficult one for the National Portrait Gallery to make, and that they’re rightly concerned about staff and visitor safety during its construction phase. However, the FDA is focused on the more than 250 people who work for this institution.”

Addressing the fears surrounding employees’ futures, the gallery told us the closure will necessitate staff changes and there will inevitably be some job losses. Part-time working, career break and secondment opportunities are all being explored by National Portrait Gallery during the build.

The organisation is also in active consultation with several unions and the DCMS. One of these unions, FDA, is encouraging all workers to join a representative body. “We are not certain what will happen,” Kenny continued, “but we can be certain that whatever the future, it will be easier to face with the support of an independent trade union.

“You can’t join a union after you’ve been let go. You can’t get help after the risk of redundancy has been confirmed. Which is why we’re encouraging staff to take this opportunity to join a union, before it’s too late.”