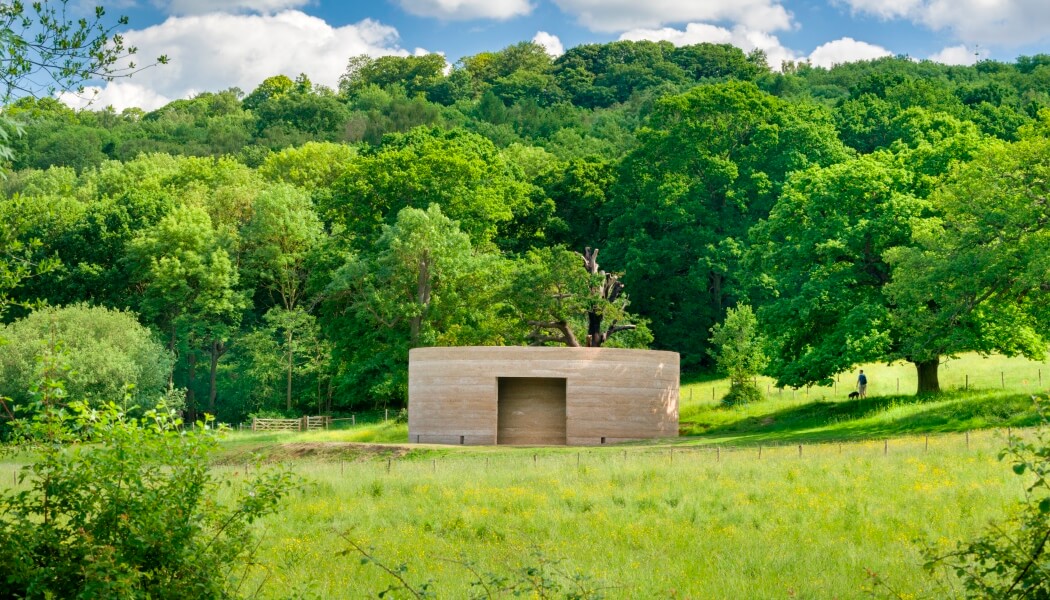 Writ in Water, which opens to the public tomorrow (16 June) at Runnymede is an immersive space for contemplation and reflection that celebrates the legacy of Magna Carta

Commissioned by the National Trust, Writ in Water is a large-scale circular building situated at the base of Cooper’s Hill, near the Magna Carta Monument in Runnymede and is a major architectural artwork by artist Mark Wallinger that reflects upon the founding principles of democracy.

The meadow Writ in Water is situated in is flanked by the River Thames on one side and an ox-bow lake on the other and The Trust says this meeting of water, sky and light, ‘provides visitors with a space for reflection and contemplation’.

Wallinger has drawn inspiration from Clause 39 (below) of Magna Carta and the fundamental principles of justice it embodies.

‘No free man shall be seized or imprisoned, or stripped of his rights or possessions, or outlawed or exiled, or deprived of his standing in any way, nor will we proceed with force against him, or send others to do so, except by the lawful judgment of his equals or by the law of the land.’ Clause 39, Magna Carta.

Built in cubits, an ancient unit of measurement, and using rammed stone from the site itself, Writ in Water sits at the heart of this ancient land where, just over 800 years ago, feudal barons forced King John to seal Magna Carta – a founding moment in shaping the basis of common law across the world.

“In Writ in Water, the use of reflection to make the text legible plays against the idea of a law written in stone,” said Wallinger. “Magna Carta curtailed this divine right and issued the first secular writ.” 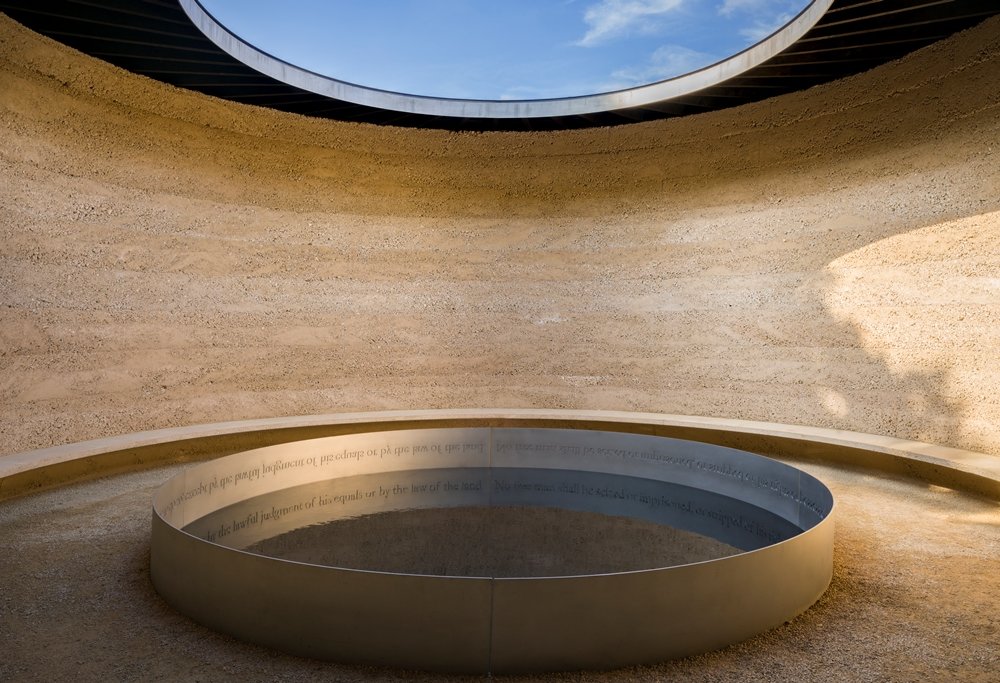 The central chamber with a wide oculus above a pool of water. Credit National Trust Images. Photograph by Andrew Butler

The title of the new building derives from the inscription on John Keats’ gravestone in Rome, which reads, ‘Here lies one whose name was writ in water’. Visitors enter through an exterior doorway, which leads to a simple circular labyrinth that opens out into a central chamber where, through a wide oculus above a pool of water, the sky is visible.

“Keats though despairing of his legacy, was to become one of the immortals and his words live anew when learnt and repeated by every succeeding generation,” says the artist. “Similarly, although Magna Carta established the law and the nascent principles of human rights, the United Kingdom has no written constitution. What seems like a birthright has to be learned over and over and made sense of. Whether the words are ephemeral or everlasting is up to us.”

Writ in Water has been commissioned as part of the National Trust’s contemporary art programme, Trust New Art, which it says is inspired by its places and includes work in the Lake District to commemorate the anniversary of the First World War.

Wallinger was selected through a competitive process led by Situations, who developed the work with the artist in collaboration with London based architectural practice Studio Octopi.

“Through Writ in Water, Mark has emphasised the continuing relevance of Magna Carta within a wider historical narrative, in a way that will enhance this special place for years to come,” says John Orna-Ornstein, National Trust’s Director of Culture and Engagement.

The building has been made possible with National Lottery funding through Arts Council England and the support of Art Fund, the Sigrid Rausing Trust, the Henry Moore Foundation and Lord and Lady Lupton. With additional support from Iwan and Manuela Wirth, Valeria and Rudolf Maag-Arrigoni and Harris Calnan.

Writ in Water is open seven days a week from Saturday 16 June 2018 and is free to enter.