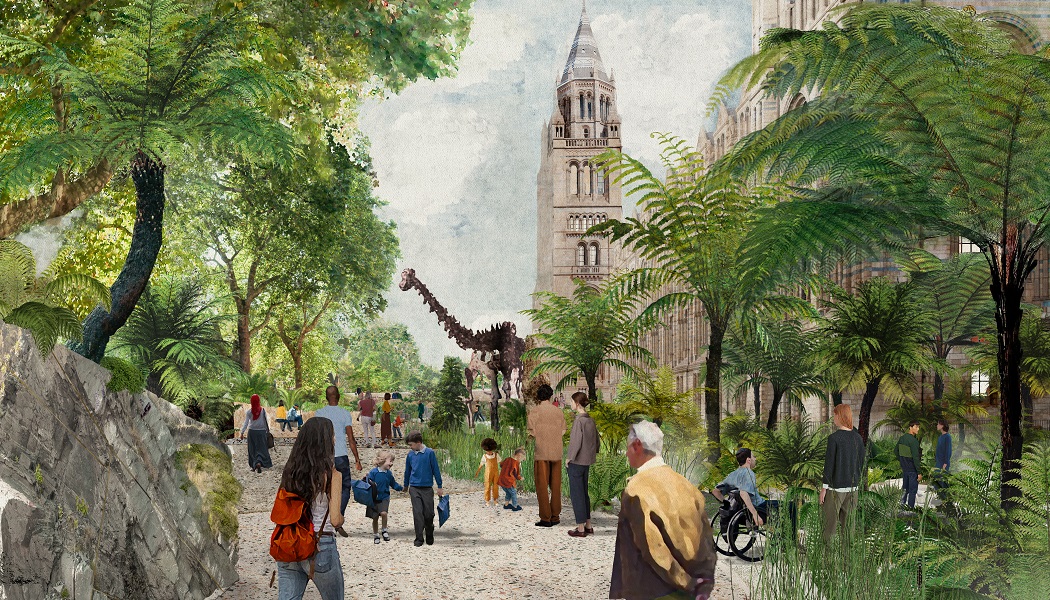 Image: © The Trustees of the Natural History Museum, London
Share

Fundraising begins for the Urban Nature Project, which will allow the museum to turn its five-acre site into an educational outdoor space.

The Natural History Museum has launched fundraising to transform its five-acre site into a free-to-visit green space in the heart of London opening next summer.

In 2020 plans were first revealed for The Urban Nature Project, which will reimagine its five-acre gardens in South Kensington as a place to engage the nation with nature.

The fundraising launch follows a survey commissioned by the Museum, which found that young people in London aged between 9-14 are now more likely to connect with nature through social media than a walk in the park. The survey suggests that the biggest barrier to time in nature is time spent inside the classroom and studying.

87% of the young people thought students would learn more about the natural world by experiencing it first hand, rather than from a textbook. This support for outside learning was mirrored by adults in London when asked how children would best learn about wildlife.

The fundraising effort’s rewards include sponsorship of a square metre of the garden and name engravings in the garden’s railings and on a standalone bench.

The project will see new outdoor galleries in the garden which tell the story of evolving life on Earth and a giant bronze diplodocus surrounded by plants from the Jurassic period. The garden will also be home to scientific sensors gathering environmental DNA and acoustic data, to monitor, understand and protect urban nature.

A schools programme in partnership with a UK-wide network of partners is delivering training and activities to schools and young people across the country with a focus on building a connection with nature. The project has already received wide support from other museums and organisations.

Sir David Attenborough said of the project: “The Urban Nature Project opens the door for young people to fall in love with the nature on their doorsteps and develop a lifelong concern for the world’s wild places. Nature isn’t just nice to have, it’s the linchpin of our very existence, and ventures like the Urban Nature Project help the next generation develop the strong connection with nature that is needed to protect it.

Lauren Hyams, Head of Garden Activities at the Natural History Museum said the project “will allow children and families to explore the Museum in a new way, and reconnect them with the outdoors, giving them the tools to safeguard nature in towns and cities, so that people and planet can thrive.”

The project, which is expected to be complete in 2023, has also been facilitated by initial support from National Lottery Heritage Fund, the Cadogan Charity, the Evolution Education Trust, Garfield Weston Foundation, Huo Family Foundation and Johnson Matthey.