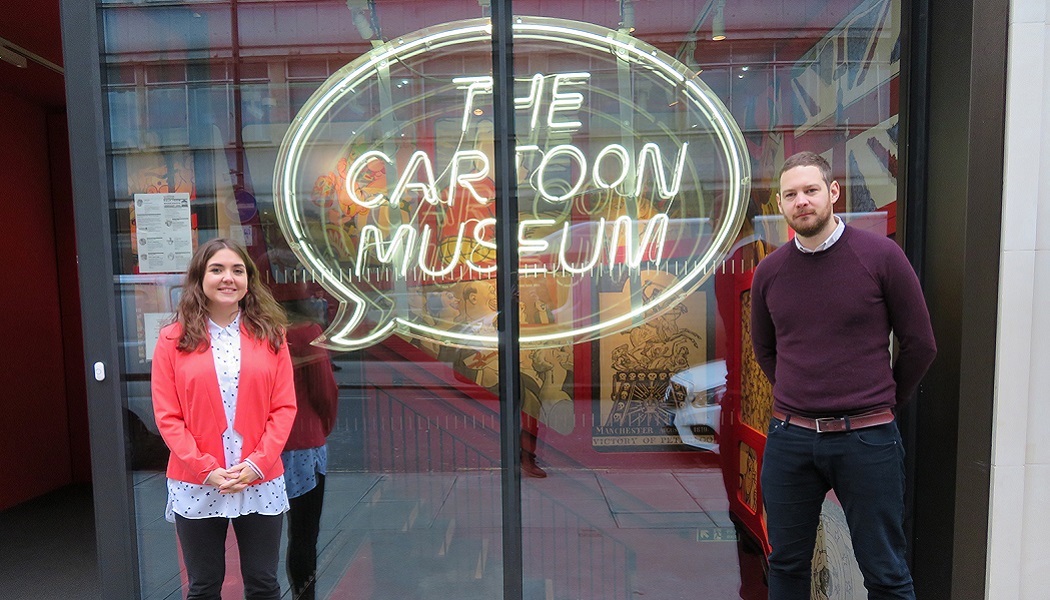 The Cartoon Museum in London has appointed Joe Sullivan and Emma Stirling-Middleton as its new director and curator.

The Cartoon Museum moved to a new home at 63 Wells Street in London last July, having originally opened in 2006 on Little Russell Street. Now equipped with a new leadership team, the Museum is embarking on a fresh chapter.

“Following a £1 million fundraising campaign, the Cartoon Museum now has a new building, and a long lease on exciting new premises in Fitzrovia, and trustees are delighted to welcome Joe and Emma to oversee the next phase of the museum’s development,” Oliver Preston, chairman of the Trustees of the Cartoon Art Trust, noted.

The Museum’s new director, Joe Sullivan, joins from The Natural History Museum, where he served as London partnerships manager. Previous to this he worked on the Centenary Project at the RAF Museum London along with several other engagement and learning roles at UK museums. He also currently chairs the London Museums Group.

“The potential here is obvious, with a fantastic new site at 63 Well Street, a great collection, and opportunities for delivering bigger and better programming,” Sullivan said upon his appointment.

“I look forward to working with the trustees and staff to bring the museum forward by engaging with new audiences, and delivering high-quality exhibition, events, and learning programmes for our visitors in 2020 and beyond.”

Emma Stirling-Middleton, the Museum’s new curator, has a wealth of recent experience, having worked on eighteen exhibition projects in collaboration with more than twenty cultural institutions across ten different countries over the past six years.

Prior to joining The Cartoon Museum, she was project curator of China at the Science Museum. Stirling-Middleton has held other curatorial roles at institutions including Hong Kong Science Museum and London’s Science Museum – more specifically working on the Medicine and Bodies Gallery unveiled as part of the £24 million Medicine: The Wellcome Galleries launch.

When her appointment at The Cartoon Museum was announced, Stirling-Middleton said: “It is a great privilege to preserve, research and share the world’s leading collection of British cartoon and comic art, including 6,000 original artworks and a library of over 8,000 books and comics.

“I am already working on this year’s exciting programme of exhibitions, which I hope will spark conversation and curiosity and attract new audiences to the Cartoon Museum.”

The Cartoon Museum: ‘Experiment with visitors, they might love it!’