On their own: The story of Britain’s child migrants told for the very first time

On their own: Britain’s child migrants tells the story of how more than 100,000 British youngsters were sent to Canada, Australia and other Commonwealth countries as part of child migration schemes between 1869 and 1967.

Despite assurances they would return home their trips would, more often than not, be on a one-way-ticket.

This exhibition is a collaboration between the Australian National Maritime Museum and National Museums Liverpool and tells the heart-breaking story of those children whose lives were changed forever.

Ellie Moffat, Curator of Maritime Collections at Merseyside Maritime Museum, said: “This exhibition tells the story of a significant chapter in our history that many people in Britain know little about.

“It’s a difficult subject but an important one to tell and this was very much in our minds when the Australian National Maritime Museum in Sydney approached us as exhibition partners.

“We wanted to ensure that the difficult experiences these young children faced are shared with as wide an audience as possible.

“Liverpool was one of the main ports of departure for the 100,000 children sent to Canada – so it feels entirely fitting for Merseyside Maritime Museum to be the first UK venue for the exhibition.” 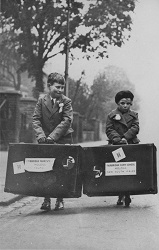 Some of the children were orphans and many came from families who were unable to care for them.

At the time charitable and religious organisations sent them overseas, with the belief that their lives would improve as a result.

They were supported by governments for which these schemes supplied much needed population and labour.

Siblings and friends were frequently split up on arrival and left isolated, facing long hard days of labour in extremes of climate. This isolation often led to a lonely, brutal childhood.

On their own: Britain’s child migrants tells their emotional stories and through detailed case studies, visitors will meet a number of child migrants and find out more about their different experiences.

In 2009 the Australian Government apologised to children who had suffered abuse in child migration schemes. In 2010 the British Government followed suit.

The exhibition has been developed by National Museums Liverpool in partnership with The Australian National Maritime Museum and has toured Australia where more than 350,000 people came to see it.

Stewart Lee: Stewart migrated when he was just four-years-old from his home in Manchester. 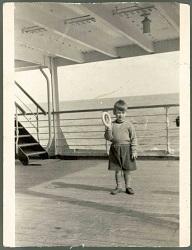 He sailed on the SS Strathnaver and arrived at Molong, New South Wales, Australia in 1955. He always carried a memento of the photograph of his family home.

"We were told we were having a big long holiday and we'd be going back." Stewart was dressed in "a nice, neat little suit" for the voyage, but this was taken off him upon arrival.

"The day we got there they were stripped off us and we were given old hand-me-downs." Stewart describes his 13 years at Molong as "extremely traumatic" in which he experienced "all sorts of abuses," and says he was provided with minimal education but expected to do a normal day's work.

The exhibition is accompanied by an online exhibition resource and a website has been set up which features oral histories and a message board:

On their own: Britain’s child migrants runs from 17 October 2014 to 4 October 2015. This is the first time the exhibition has been seen in Britain. It is free entry.