The result of the Manchester site’s multi-year £21.5m ‘First Light Project’ will be revealed to visitors later this year.

The First Light Pavilion, a new attraction at Jodrell Bank in Manchester, is set to open to the public on 4th June 2022.

The new building is at the centre of a £21.5m project, supported by the National Lottery Heritage Fund, which aims to open up the history of the location by engaging visitors with the stories of its scientists and their ground-breaking feats of science and engineering.

The Jodrell Bank site is part of The University of Manchester and is home to the Jodrell Bank Observatory, a UNESCO World Heritage Site, used for investigating radio waves from the planets and stars. 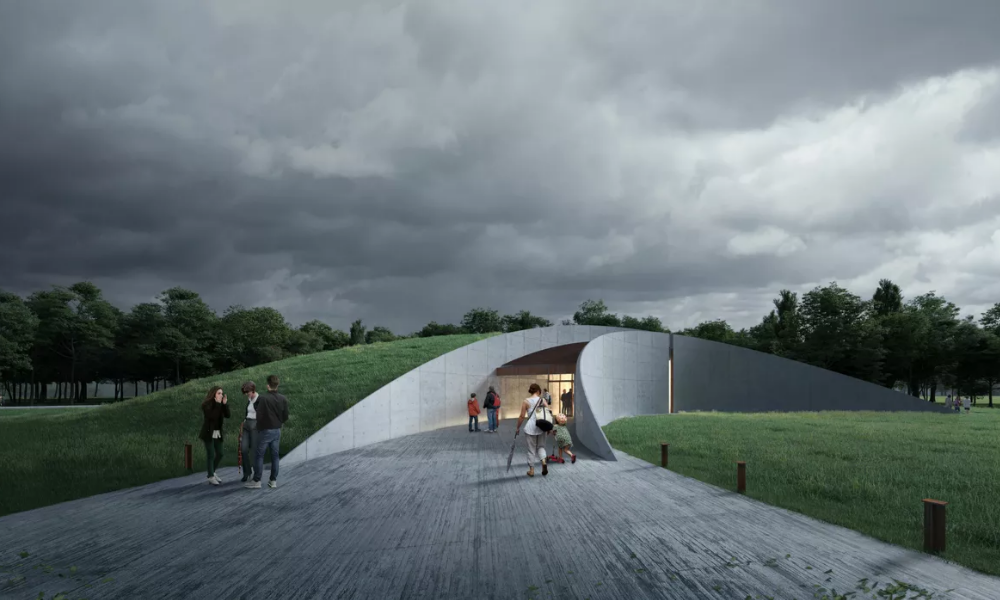 The concept for the new building was an original idea developed by Jodrell Bank’s Professors Teresa Anderson and Tim O’Brien who have spearheaded the project since its inception.

The First Light Pavilion was designed by architects HASSELL Studio and takes the form of a grass-topped 76m diameter dome which mirrors the shape and scale of the landmark Lovell Telescope.

The building’s design is also said to make reference to ancient sites such as Stonehenge and Newgrange, by aligning with the sun via a meridian line cut through the dome’s entranceway.

Inside the new Pavilion, visitors will be able to access a new permanent exhibition created by Casson Mann, which will tell the Jodrell Bank story from 1945 and the birthplace exploration through using radio waves.

Exhibition audiences will be able to see archive materials brought together for the first time including audio, film, dairies, letters ,plans, notebooks and photographs. While mostly digitised, physical items will also be on display including a large section of the telescope gear rack, and one of the telescope’s control desk panels.

Artist’s Impression of the Space Dome, inside the First Light Pavilion © Casson Mann

Visitors will also be able to experience planetarium-style shows in a custom built auditorium, complete with a curved projection screen.

There will also be a new temporary exhibition gallery in the new building, with an opening show about the realisation of the First Light project.

A 130-seat café with a terrace overlooking the Jodrell Bank Arboretum will also open.

A series of preview and pilot activities for First Light will begin from March 2022 onwards, with public opening set to take place on 4th June 2022. The launch will be complemented by a celebratory summer-long season of community engagement activity, public events, and a new formal education programme.

Eilish McGuinness, CEO of The National Lottery Heritage Fund said: “Jodrell Bank is truly a unique heritage site, of national and international importance, with an inspirational story of Britain’s role as a leader in the science of the exploration of the universe, set in a landscape of great beauty and with iconic heritage at every turn.”

David Rutley, MP for Macclesfield, added: “The opening of the First Light Pavilion will be a remarkable moment not just for Cheshire and the North West but for the whole of the UK. Visitors from across the nation will be able to come here and celebrate the pioneering spirit of endeavour that this much-loved site has come to represent.”