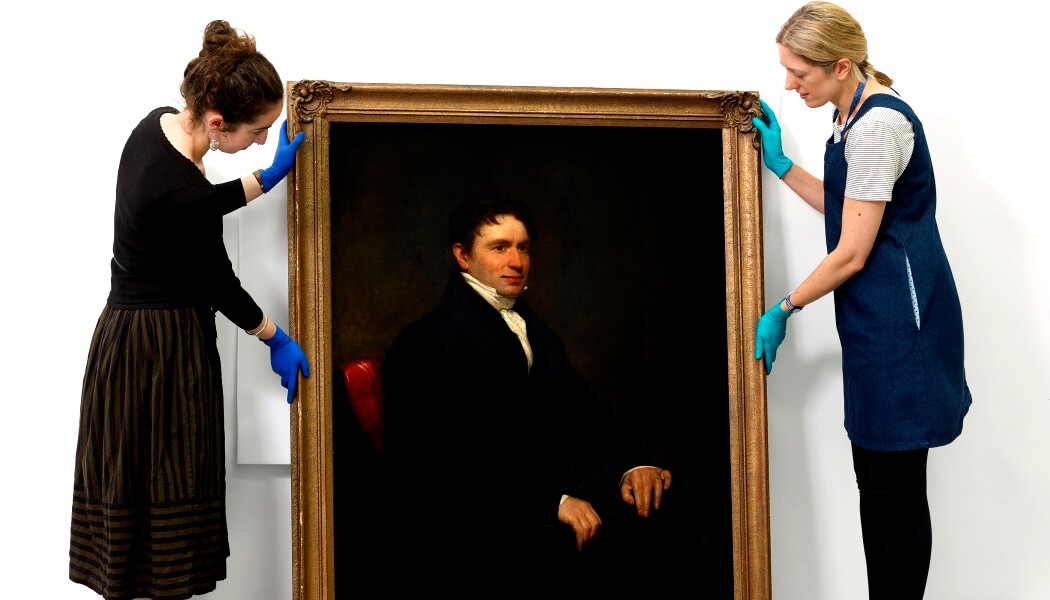 Main Image: Curators handle the 19th century portrait of Hugh Hornby Birley who was reportedly the captain who gave the orders for the local government forces to attack the crowds
Share

As the People’s History Museum (PHM) prepares for its major exhibition Disrupt? Peterloo and Protest, which opens next month to commemorate the 200th anniversary of the Peterloo Massacre, a descendent of the yeomanry captain who reportedly gave orders to attack protesters has donated a portrait of his great great grandfather to the museum

The oil painting depicts Hugh Hornby Birley a 19th century Manchester mill owner, who as captain of the Manchester and Salford Yeomanry, and played a central role in the events that unfolded 200 years when a peaceful protest in Manchester for representation and rights ended with a cavalry charge and the death of 18 and the injury of around 700 men, women and children.

It is an extraordinary addition to the museum in many ways, most notably as it is the first piece in the museum’s collection that focuses on one of the individuals present at St Peter’s Field on 16 August 1819, and allows the museum to reveal the story of brutality and suppression on that day and the government’s complicity. It also represents a break from the traditional viewpoint of the Birley family’s whose previous interpretation of events, ‘alluded to the massacre as being the result of errors of judgement that produced unintended consequences’, with donor Dr Rick Birley taking a less forgiving view of the pivotal event.

“The failure of leadership, total lack of judgement, and a complete lack of experience, set against a basic class division and the need to uphold the establishment, led to the inexcusable violence,” he said. “At a time when the masses relied upon the benevolence of the businessmen, the treatment they endured makes it little wonder that the cry of social reform and justice was becoming so loud during the 19th century.” 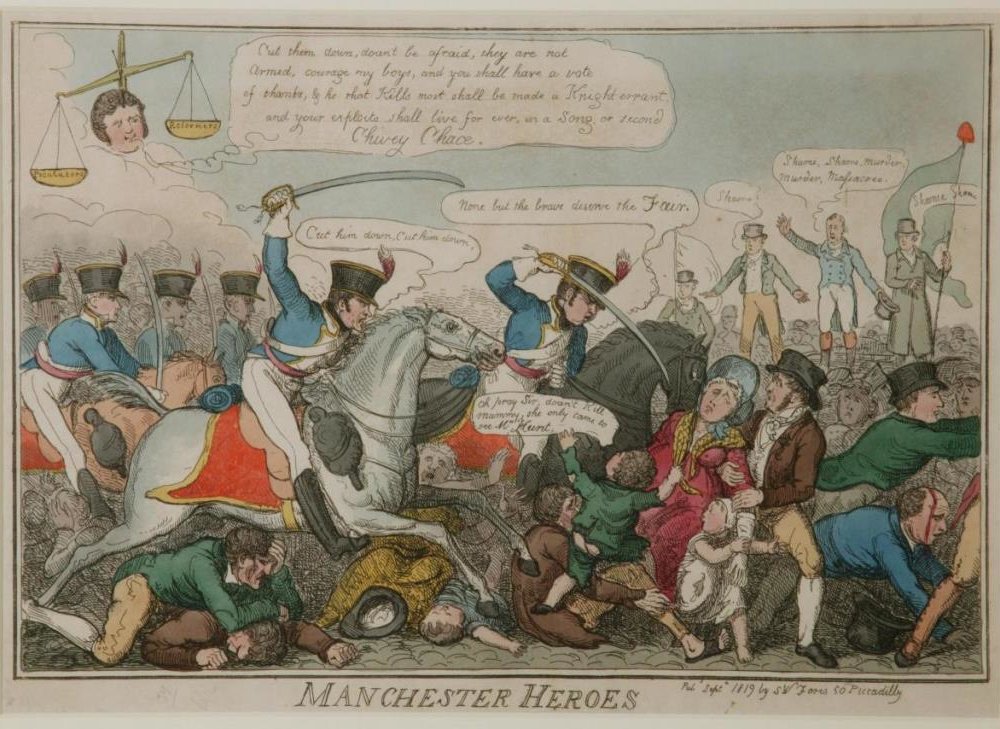 He said he donated the portrait to People’s History Museum because he believes this is where it belongs. “Through this portrait and my connection to it I have come to understand much about class divisions, inequality, the processes of change, the power of the state and the politics of revolution.”

It is not known by whom and when exactly the portrait was painted but it is believed to sometime after the Peterloo Massacre and for many years hung on the walls of the Birley family home of Broome House in Didsbury, south Manchester and was then passed through the generations.

Birley’s wealth came from the plantations of America, from where raw cotton was shipped to Liverpool and then transported through the canals to his factories, one of which stood on Oxford Road in the centre of Manchester. He was a man known for his conservative political allegiances and his harsh treatment of his workers. He took on the role of captain of the Manchester and Salford Yeomanry (the local government force) at the age of 41.

On 16 August 1819, it was reported by observers that it was Birley who gave the orders for the local government forces to attack the crowds. He was said to be the first of the cavalry to arrive at the hustings in an attempt to arrest the radical speaker Henry Hunt, attacking anybody in his way. The eyewitness reports also indicate that it was Birley himself who was responsible for many of the deaths and injuries of the men, women and children present.

Birley was eventually brought to trial, with three others from the Manchester and Salford Yeomanry, three years after the Peterloo Massacre. Despite shocking witness statements, they were all acquitted. Their violent actions, it was held, were justified in dispersing an illegal gathering.

Birley’s legal costs were covered by the government of the time, and his career would continue to flourish; eventually he became a magistrate and the Deputy Lieutenant for Lancashire.

The portrait of Hugh Hornby Birley will take its place as one of a number of key Peterloo artefacts that are being brought together for the first time for the exhibition Disrupt? Peterloo and Protest. Like the Birley portrait, a number of these have not previously been on public display. Several items have been acquired by PHM thanks to The National Lottery Heritage Fund’s Collecting Cultures programme that supports museums, libraries and archives to develop their collections through acquisition projects, which also funded the transport and conservation of the Birley portrait.

The People’s History Museum is the national museum of democracy and has one of the leading collections of Peterloo artefacts, including sabres from the massacre, commemorative medals, ceramics and a handkerchief – many produced in the aftermath of the massacre.

Jenny Mabbott, Head of Collections & Engagement at People’s History Museum, said: “Having the portrait of Hugh Hornby Birley as part of our collection, and as one of the key objects in our upcoming exhibition … helps us to explore and understand what happened on 16 August 1819 and how we can continue to learn from this watershed moment in British democracy.”

Disrupt? Peterloo and Protest opens to the public on Saturday 23 March 2019 and runs until Sunday 23 February 2020.