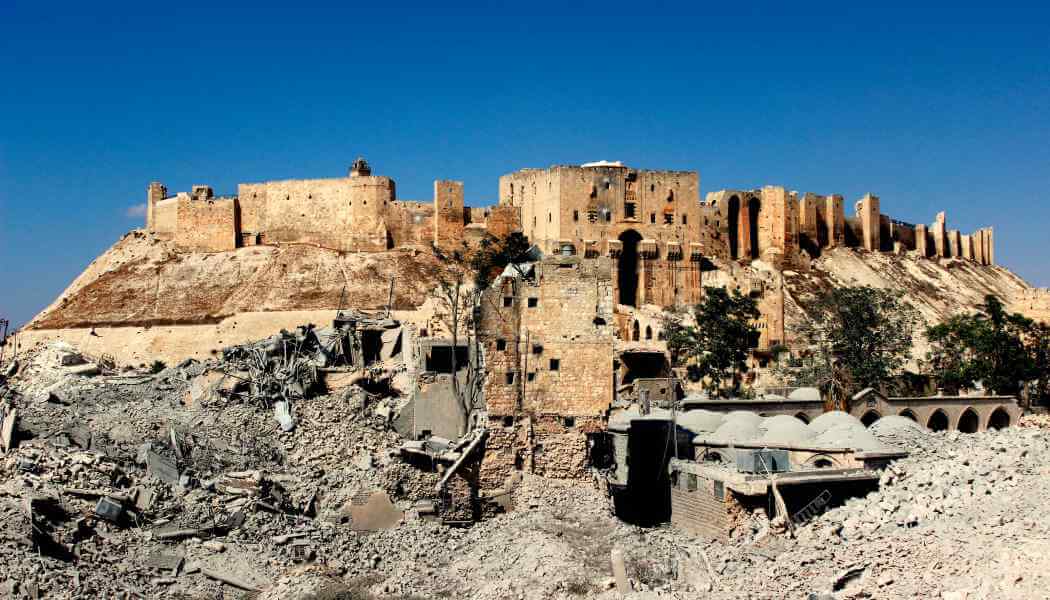 Main Image: The mosques and a late Ottoman hospital located in front of the gate of the citadel of Aleppo have largely been destroyed during the course of the civil war. © Sultan Kitaz, 2014
Share

Cultural Landscape of Syria – Preservation and Archiving in Times of War opens this week at The Museum of Islamic Art in the Pergamon Museum, part of Berlin State Museums. The exhibition takes visitors on a virtual trip through the cultural landscape of Syria using objects, films, photos and interactive screens

The Cultural Landscape of Syria – Preservation and Archiving in Times of War exhibition provides insight into the work of the Syrian Heritage Archive Project and the practice of cultural preservation. Established in 2013, the Syrian Heritage Archive Project’s aim is to create a platform for documenting and digitising Syrian cultural heritage that has been under threat since the outbreak of the civil war in 2011 and compounded by the wanton destruction of heritage sites and ancient objects by Isis.

The focus of the exhibition is on the Old Cities of Damascus and Aleppo, the oasis city of Palmyra, Raqqa and the so-called Dead Cities, a group of 700 abandoned settlements in northwest Syria between Aleppo and Idlib. The curators say that not only were the Syrian people plunged into disaster but their material cultural treasures and immaterial cultural expressions also destroyed, severely endangered or irretrievably lost. They note that previously largely intact Old Cities such as those of Aleppo and Bosra, as well as the ancient oasis city of Palmyra, have been severely affected. 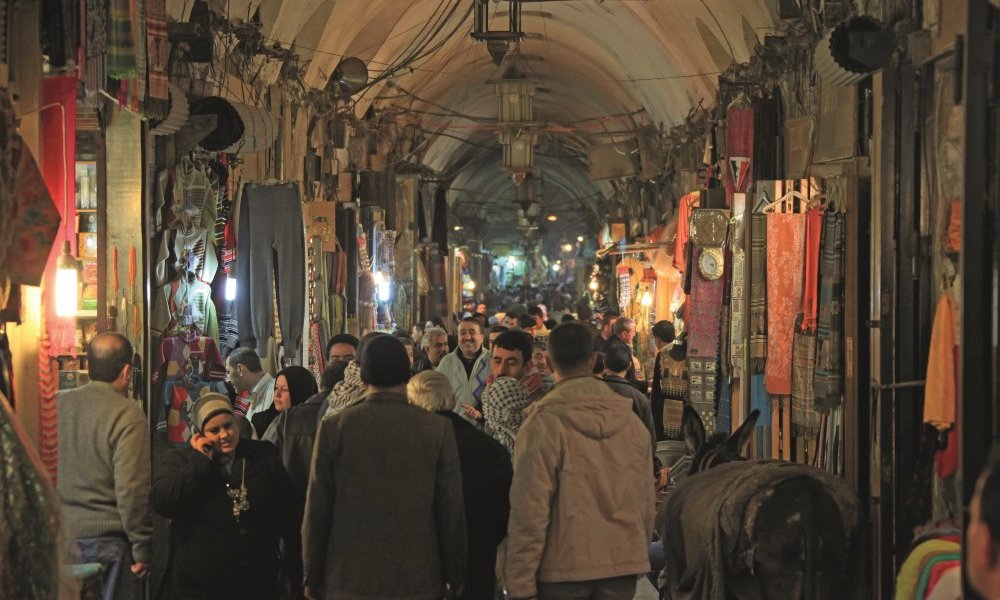 The bazaar in Aleppo with its more than 1,000 small shops was the heart of the city until it was strongly affected by the war in Syria. © Issam Hajjar, 2011

The so-called Dead Cities from early Christian times were also damaged with the crusader fortress Krak des Chevaliers since been repaired and the Old Town of Damascus and the castle of Salah al-Din being among the few historical sites to be spared major damage.

The Syrian Heritage Archive Project is part of the Syrian Heritage Initiative, which was also established in 2013 as an umbrella title for a number of distinct but related projects with a common purpose to ‘utilise Syrian experience and expertise in the museum to promote and document Syrian heritage in Syria’. The initiative was instigated and is led by the museum’s director, Professor Dr Stefan Weber, in close cooperation with the German Archaeological institute and was highly commended in the International category at the Museums + Heritage Awards last year for its Museum as Mediator of Shared Heritage project in 2017. 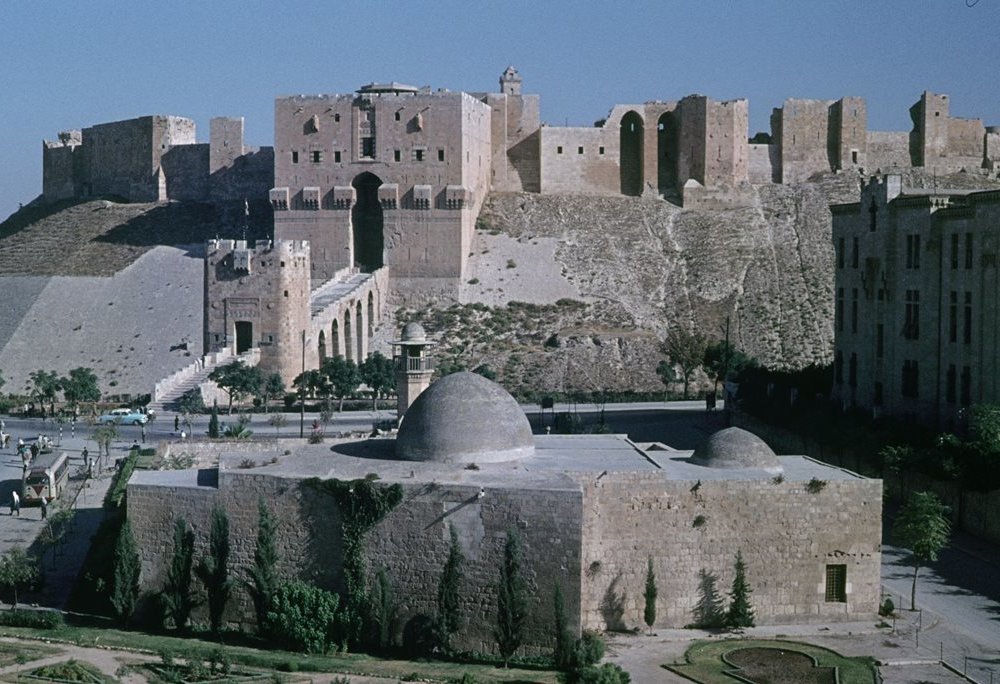 Aleppo: The Sultaniyya Mosque Complex from the 13th century - right in front of the Citadel - was destroyed during the war. Photo: Eugen Wirth, 1963, © Museum of Islamic Art, Berlin,

“Our vision is to create a collective awareness of cultural heritage – a heritage that unites us through history,” said Weber. “With the museum, we want to involve a new audience in the ongoing discussions on cultural heritage in conflict and social responsibility. The participants name their own inheritance and are actively involved at all levels. The projects have a strong participatory character. Multaka allows cultural participation as democratisation of a cultural institution and a re-appropriation of heritage in the new host country.”

The Syrian Heritage Archive Project says that people’s reports, photos, plans and maps are a valuable basis for the reconstruction of monuments and sites destroyed by war. Since 2013, the project has been collecting these as evidence and has created the most comprehensive digital archive on Syria outside of the country and through the exhibition are now being presented to the public for the first time.

The Syrian Heritage Archive Project: a platform for documenting and digitising Syrian cultural heritage that has been under threat since the outbreak of the civil war in 2011

Interactive Heritage Map of Syria that collects oral traditions and memories from Syria and about Syria.

Focusing on the assessment of war destruction in Aleppo with a training programme for Aleppine heritage specialists on documentation and the creation of the first comprehensive catalogue of monuments of Aleppo.

Crossroads Aleppo: creating a comprehensive, multidisciplinary catalogue of important architectural monuments of the World Heritage Site ’Old City of Aleppo’, presented in both English and Arabic. 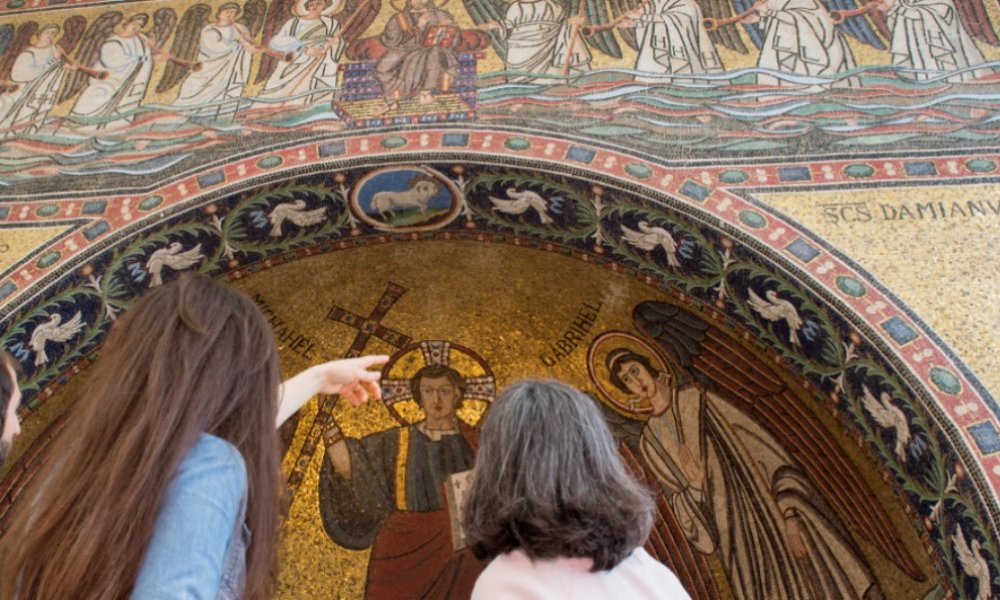 Syrian and Iraqi refugees as museum guides, part of the Multaka project. Museum of Islamic Art in Pergamon Museum

The museum says the Syrian Heritage Initiative and its strands have been the result of a significant shift in its outlook, which has moved ‘beyond the concept of the museum as a collector of antiquities, towards a meeting point of networked cultural heritage and a provocateur of dialogue’.

The Syrian Heritage Archive Project is supported by the Cultural Preservation Programme of the German Federal Foreign Office and the Gerda Henkel Foundation and the exhibition is easily accessible in German, English and Arabic.

Cultural Landscape of Syria – Preservation and Archiving in Times of War opens on Thursday and runs until 26 May 2019.