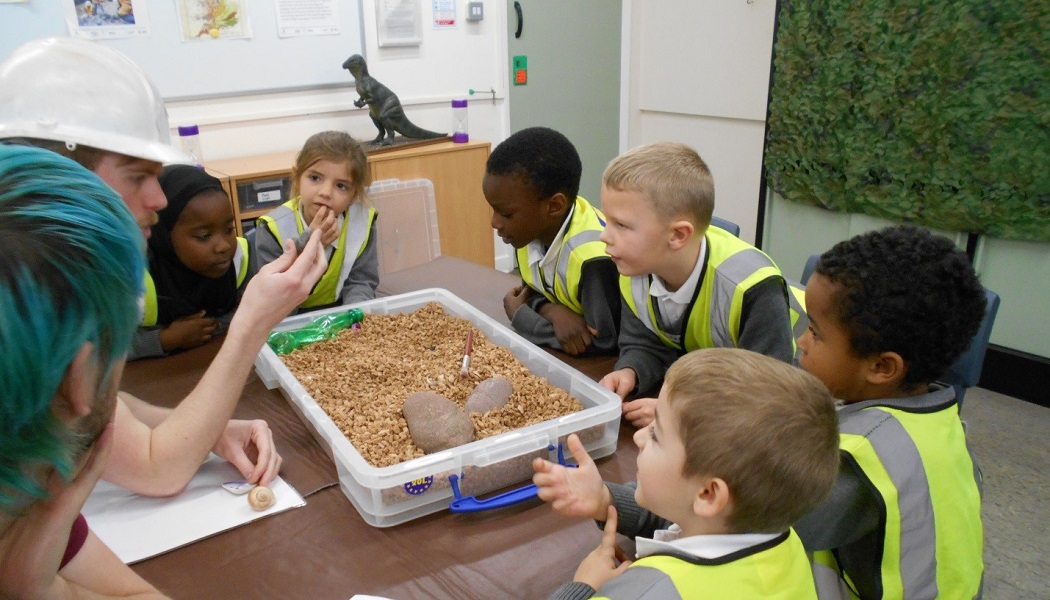 Pupils from Kingfisher School in Bristol have become ‘Dino Experts’ at Bristol Museum & Art Gallery as part of Kids in Museums’ Takeover Day.

Twelve Year 4, 5 and 6 pupils have taken over Bristol Museum & Art Gallery to be trained as dinosaur experts. The newly-trained specialists then harnessed their knowledge to try and convince 45 Year 2 and 3 students from their school which dinosaur would win in a ‘battle’.

So what did the pupils think of their day?

Rachel who works at the Bristol Museum told us all about the Dino Takeover, it’s a day when you want to go on a normal trip, but with different adults and older children from their school to help and support them with their leaning and finding out new things about their enquiry. We were there and we were called experts to talk about a specific dinosaur.

The trip took place in November 2019, the first children we were working with were year 2.  Me and my group were talking about the Plateosaurus, which was so big and it has a giant tail to whack other opponents. Then year 2 went to learn about the Theco which is short for Thecodontosaurus. An interesting fact about this dinosaur it has a blue neck, to attract other females.

Next, the year 2 groups went to the Camarasaurus. They said that the Camarasaurus is colossal and that’s why they only have one huge leg in the Museum. The people who talked about the Camarasaurus and one person went right to the end of the hall into the minerals gallery until the children said stop to demonstrate how long it’s tail would be.

Then all of the things happened again with three other Year 2 groups and then all again after lunch with all four Year 3 groups.

Then we had a little break from them and went to see the Egyptian area and it was so cool .It was so much fun working with younger children, I don’t know what they would have done without us! They probably wouldn’t be here for a long time and they wouldn’t learn so much about these amazing dinosaurs I really hoped they enjoyed it but most importantly they learnt a lot of things about dinosaurs to use in their enquiry. I really enjoyed helping younger children it was so fun!

A few weeks ago, Rachel (who works in the museum) came to our school and introduced us to the roles we would be doing in the museum for take over day (which is a day where the museum gives children roles that normally adults would do). Me and 11 others were going to be those children (also called a Dino expert).

We did many fun things including Battle of the dinosaurs which we were in charge of, the dinosaurs had to go against each other with their cool traits. In this game we taught the Year 2 and 3 a bit about our dinosaur (the Camarasauras).

Did you know the Camarasaurus was so big that they could only fit one leg in the museum and it went all the way up to the ceiling! 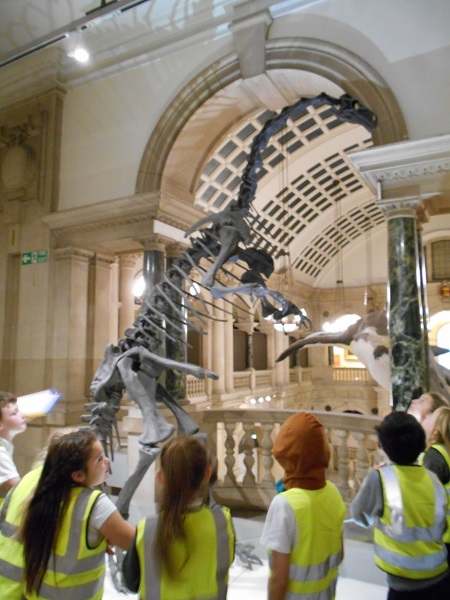 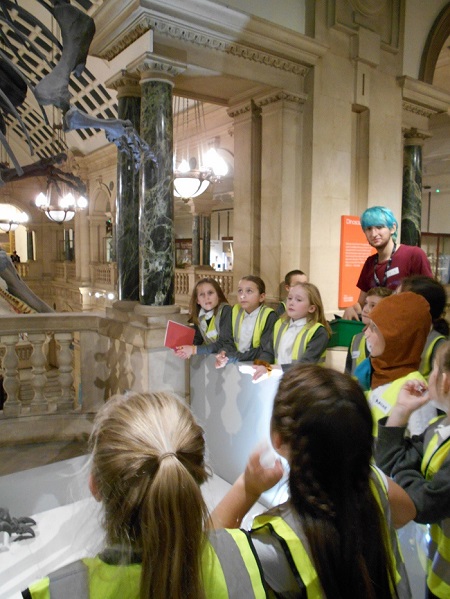 A couple weeks before the Dino Takeover Rachel came over to the Kingfisher school and told us how to be dino experts. 12 students from the Kingfisher school got chosen to give an explanation about 4 dinosaurs that were called Thecodontosaurus, Camarasaurus, Scelidosaurus and Plateosaurus.

The University of Bristol students helped as well but we did most of the explaining. When we did the first explanation we did quite well but when it was the afternoon we did better than the first couple. We also learnt a bit more about the other dinosaurs in the other groups.

When we finished we celebrated about what we achieved and now we are dino experts. The experts that came really enjoyed coming and explaining about the dinosaurs.

Thank you for the experience at the museum and for letting us explain about the dinosaurs.

A few days ago, Miss Barker and Mrs Wiggins told us that we were going to be taking over the Bristol Museum for the day (a takeover day is when you take over the jobs at the Museum the adults usually do) we were shocked!

We met Rachel (who works there at the Museum). Years 6, 5 and 4 were the experts (we were in charge of the battle of the dinosaurs).

While we were waiting, we were practicing for our next group, doing different parts to say. In my group I had Matilda and Kyle. The dinosaur my group had was called the Camarasaurus; it was a very big dinosaur that lived in the past.

It was fun at the Museum; my favourite part was when we were acting and telling the year 3s and 2s about the dinosaur.

Thank you for giving us this opportunity at the Museum, Rachel and letting us take over for the day.

The Dino-takeover activity is when a group of pupils come for a normal trip to the Museum but for a treat and brought some EXPERTS to support them and the adults who work there.

Rachel, the person at Bristol Museum who set it up, came in a couple of days ago to explain what we were doing for the children. Me and my two other friends were working on this dinosaur called ‘Plateosaurus’.

The year 2 class came to the dinosaur battle activity first, but they started with Thecodontosaurus. There’s one main fact about this dinosaur, other females get easily attracted to this dinosaur because of its beautiful blue neck.

After that, year 2 moved onto Camarasaurus.  The year 2s had to tell Rosie to stop and where they would think the head of Camarasaurus would be. Only the front leg could fit in the Museum and it went up to the ceiling. As you might not know a Camarasaurus was gargantuan.

The explorers (year twos) walked around the corner where Scelidosaurus dinosaur was, they had spikes on the back of them to protect themselves getting jumped on.

After all of that, the year three’s finally made it to us. Again they started at Thecodontosaurus.  As I forgot to mention, we gave costumes out to two people that matched the dinosaur they were looking at.

Next we got ourselves into a line and we got arranged to go to lunch and got our lunch boxes from the place where we packed them in. After we got into our groups once again, and got into our places also got ready to perform but this time to the year three’s. As the year twos did, they started with Thecodontosaurus and Lilliana asked a lot of questions for the children. Most of the children answered Lilliana, Jesse and Jim, which was all of them in the group of experts for Thecodontosaurus. They also gave them the costumes and help them put them on.

Near the end of last term, Rachael [a museum expert] came to our school [the kingfisher school] and we learned about 4 particular dinosaurs. They were called Thecodontosaurus, Plateosaurus, Camarasaurus and the Scelidosaurus. 12 special students were chosen to go on a trip to the Bristol Museum in November 2019.

These children were going to learn about the 4 dinosaurs and then teach the year 2s and 3s about them. These children also asked the younger children how many stars they would rate each dinosaur from 1 to 5.