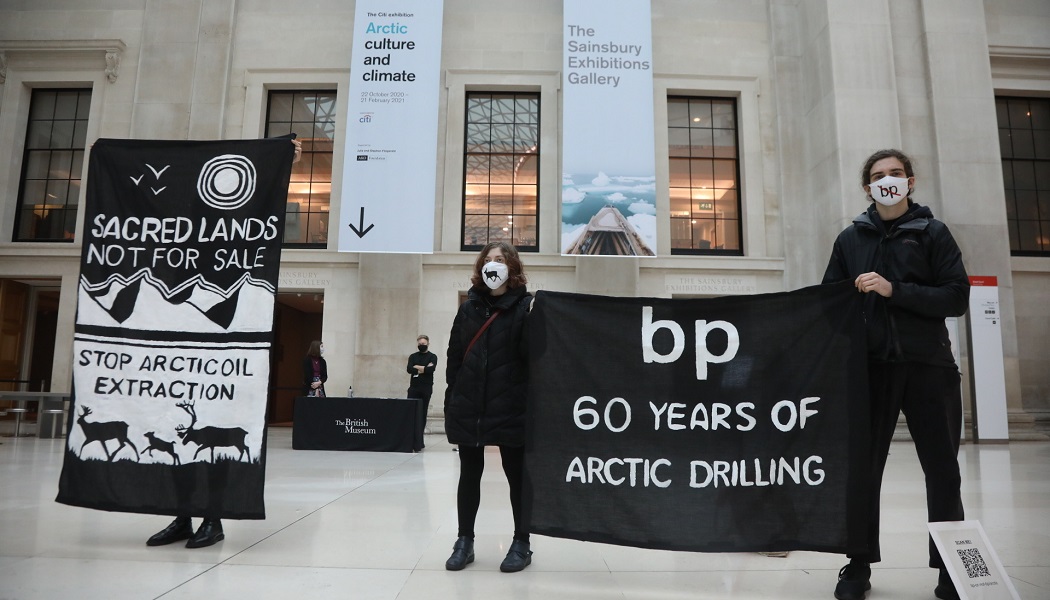 A group of activists from campaign group BP or not BP? today held a socially-distanced demonstration at the British Museum in protest against the institution’s ties to firms with involvement in the oil industry.

Part of an international effort to raise awareness of the impacts oil drilling in the Arctic is having on Indigenous communities, the BP or not BP? demo targeted the British Museum as it prepares to open a major exhibition sponsored by global investment bank Citi.

Acknowledging that the new British Museum exhibition “rightly puts Indigenous people’s perspectives on climate change front and centre”, Sarah Horne from BP or not BP? says the reason the institution is repeatedly the location for protests is that it “continues to partner with those that helped create the climate emergency”.

“The Arctic exhibition is sponsored by Citi, a bank that is the third biggest funder of fossil fuels in the world. Meanwhile, the museum continues to partner with oil giant BP, which first started drilling in the Arctic 60 years ago. There is a clear disconnect between the words and the actions of the museum and it’s time that was addressed,” she adds.

Prior to national lockdown in the spring, campaigners from the same group held a demonstration at the British Museum to lobby the organisation to sever ties with BP.

BP or not BP? held today’s Covid-secure display in solidarity with a day of action led by Indigenous groups from Alaska. This intercontinental endeavour aims to raise awareness of the ongoing strife caused by oil drilling and the Trump administration’s push to open up the Arctic National Wildlife Refuge for oil exploration.

Today’s peaceful demonstration at the British Museum saw a small group of activists holding banners at a safe social distance. Protests are exempt from the Tier 2 rules currently in force across the capital, provided organisers complete a risk assessment. BP or not BP? say this was adhered to and a copy of the document was offered to the museum in advance.