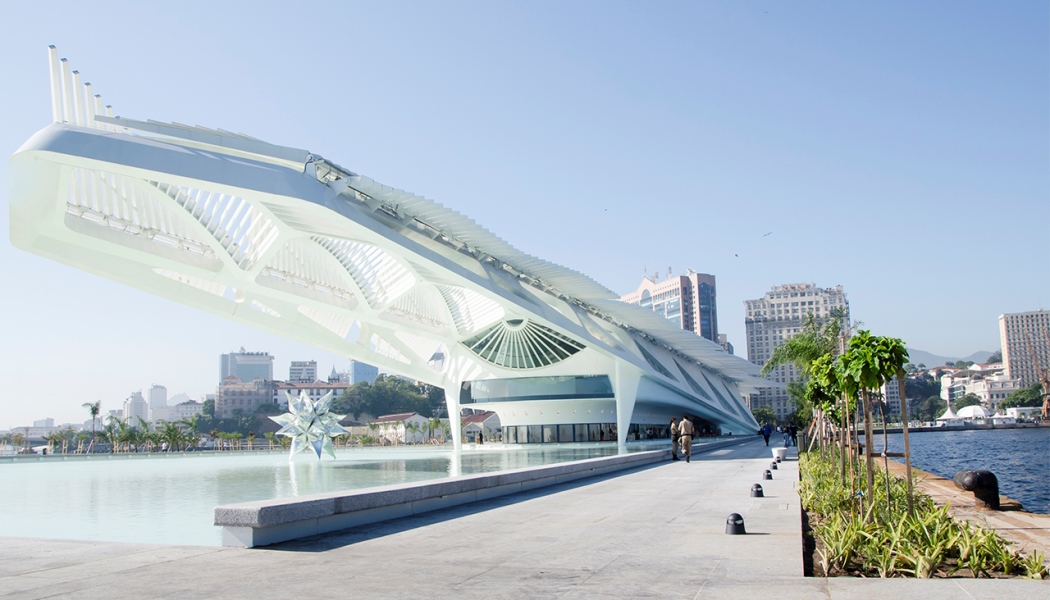 Next month at the Museums Association Conference Luiz Alberto Oliveira, Chief Curator of the Museum of Tomorrow and his colleague Alexandre Fernandes, head of Audience Development, will be keynote speakers. They will talk about how the science museum, which opened in December 2015, has helped regenerate the Port area of Rio de Janeiro and has far exceeded visitor expectations.

The Museu do Amanhã (Museum of Tomorrow) will be almost a year old when Oliveira and Fernandes join other keynote speakers including Museums Association president, David Fleming, Jackie Kay, the national poet for Scotland and Oonagh Aitkin, chief executive of Volunteering Matters at the Glasgow event from November 7-9.

Here we talk to Oliveira, who tells us about the museum’s founding principles, its ongoing work with the community and the challenges of incorporating the uncertainties of the future into a museum.

What are the topics you will be discussing at the Museums Association Conference?

Myself, as Chief Curator, and Alexandre Fernandes, head of Audience Development of the Museum of Tomorrow (MoT), will present a brief description of the museum’s project and purposes, as well as some results achieved after its opening (on the occasion of the MA Conference, MoT will be 11 months old!) and review some strategies concerning our neighbours in Rio de Janeiro’s historical downtown.

How would you describe your role at the Museum of Tomorrow?

I try to collaborate with the team to keep up moral and also the major guidelines of the project. We are a science museum, where contemporary science concepts and resources are applied to offer our visitors a journey of exploration of possible future scenarios – regarding planetary, environmental, cultural, social, cognitive, effective, personal, technical, political and ethical issues. I guess that most of the time I’m in charge of bringing up potentially interesting ideas for discussion – which for our team most probably translates to chief troublemaker.

How is the Museum of Tomorrow different to other museums?

The museum’s main exhibition is structured upon a sequence of experiences, grouped in several expographic topics, each comprising different scientific matters and presenting the great questions that mankind has always asked itself: Who are we? Where do we come from? Where are we? Where are we heading to? How do we want to get there, that is, which values do we want to convey to future generations? Through this experiential content, the visitors can explore and appraise possible future scenarios that may take place within the bounds of some major trends that, according to our science consultants, shall take part in the shaping of the next decades. Therefore, unlike other organisations dedicated to conserving some repository of items or works, the museum’s content – data reports, estimates, forecasts – must be constantly updated, to keep up with science discoveries and advances (and so avoiding becoming, very quickly, a Museum of Yesterday!). This priority, in turn, led us to develop a permanent set of exhibiting frames, where an ever-changing, all-digital content is displayed. Since the museum’s opening, in fact, we have already performed more than 80 updates, ranging from new views about the human microbiome to the detection of gravitational waves. As far as we know, there is no other science centre with such characteristics. 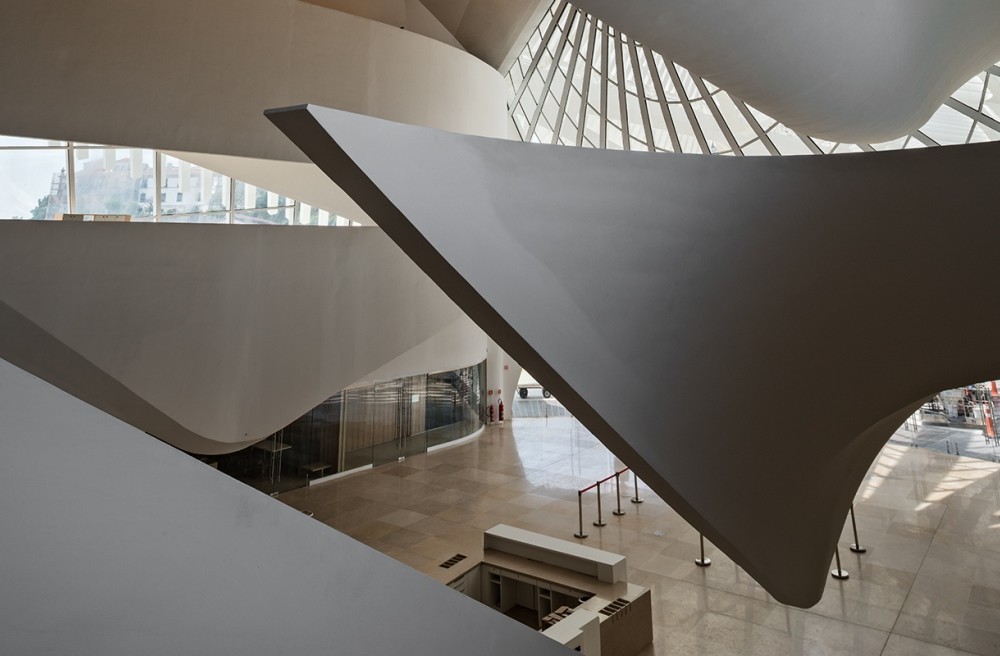 The view of the museum lobby, which has seen 1 million visitors pass through in the first eight months. Photograph by Cesar Barreto

What are the aims and objectives of the museum?

We are a science museum, but our aim is not to just present the workings and achievements of scientific endeavor. Our main objective is, in fact, to engage the visitors to acknowledge and reflect upon the alternative paths that, according to both our individual and collective choices, may become the actual state of affairs of tomorrow. If certain actions are taken, certain possible future scenarios are favoured; other actions will lead, of course, to different consequences. Cause and effect relations, in an open realm of multiple possibilities: that’s what the museum is about. Our collection is thus a set of possible worlds, which the visitors can approach through a narrative built upon a philosophical foundation: the concept that tomorrow is not ready, is not a date in the calendar nor a place where we will arrive – tomorrow is a construction, and we will all take part in this construction, as people, citizens and members of the human race. So, in a very precise sense, we are an ethics museum, a museum of values.

How have these aims been met in the first year?

The results from our first surveys are indeed outstanding: one million visitors in eight months (our projected figures, when the project began, were around half a million per year). About one-third were foreigners, mostly from Latin America, and about half from Rio’s suburban, less-wealthy areas. But the most amazing figure was that around forty per cent were not customary museum visitors, and about ten per cent – that is, one hundred thousand people – had never been to a museum before. Ever. Eighty per cent reported having an interesting, thought-provoking experience (most of the complaints being about the immense queues, of course). More than two-thirds would “surely” return for another visit. So, I think it’s safe to conclude that, in spite of many difficulties, the museum is starting on a good footing.

What are some of the things you have learnt while working at the museum about how we will be living in the future?

Once, an impudent apprentice asked Oscar Niemeyer about his creative process: “how you do what you do?” The question was, of course, impossible, but the answer was swift, straightforward, and amazing: “I always seek for the unexpected.” This was also, I think, both the most difficult challenge in developing a museum about future affairs (how do you incorporate uncertainty in your exhibition?) as well as an important characteristic of the development process itself – many solutions took place through completely unseen ways, although, in the end, they indeed seemed plainly obvious. I don’t quite well know how we will be living in the future – there are many possibilities, you know – but I’m absolutely convinced that education is the bridge that will take us safely there. 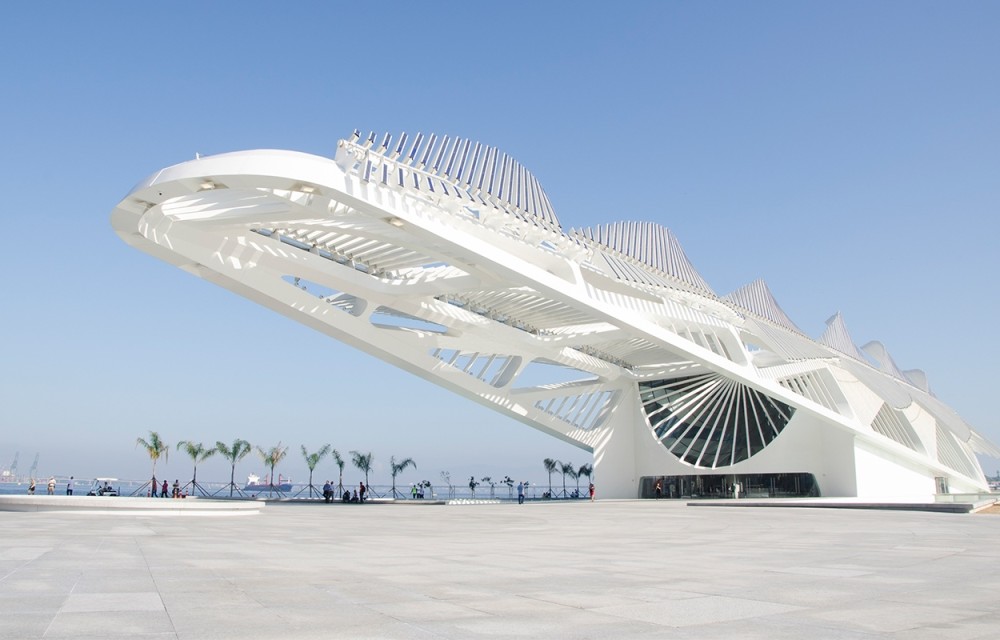 View of the museum from the port side of Praca Maua. Photograph by Byron Prujansky

In what ways is the museum working with its local community especially youngsters and the less wealthy?

Following the example of the MAR – Museum of Art of Rio, the wonderful art museum that is our elder institution in the Port area, we bestow crucial importance to our relations with our neighbours. You see, this region was the heart of the city for centuries, but it was abandoned during past decades due to a highway that severed the city from its bayshore, in spite of the fact that this has always been a place of deep cultural significance – for instance, samba and choro, typical musical forms of Rio, were born there. The museum is an now an icon of urban regeneration in this area, and we invited our neighbours to get acquainted with a public building which is, in the utmost sense, theirs. Together with MAR, we develop special programmes with the local schools and borough associations. Many people of our working crew and junior team are locals, and a fixed percentage of acquired goods and services must come from nearby sources. We envisage this partnership with our human, geographical and historical environment will grow ever stronger.

How important is it for museums to be accessible and also be more than just buildings by having outreach programmes?

The Museum of Tomorrow has, from its very conception, two ethical guidelines: Sustainability and Coexistence. They are the domains of ressonance of two ethical questions: how do we want to live with the world, how do we want to live with each other? Hence, accessibility is a truly fundamental aspect of the museum stance – and should also be for any and every public building. Both the architecture by Santiago Calatrava and the internal circulation design strived to fulfill the most stringent requirements to attain the most broad accessibility range that could be reached, because providing wide access is not about bringing in the exceptions to the “normal”, but to define and apply a new norm. In the same token, extending the Museum’s activities beyond its physical borders is simply to be contemporary. We developed interaction programs with many other science and culture institutions around the city – libraries, museums, public centers. We sit at the historical center of the town, but our presence must be distributed and felt throughout the relational space covering the whole city. Networking is, in fact, multiplying.