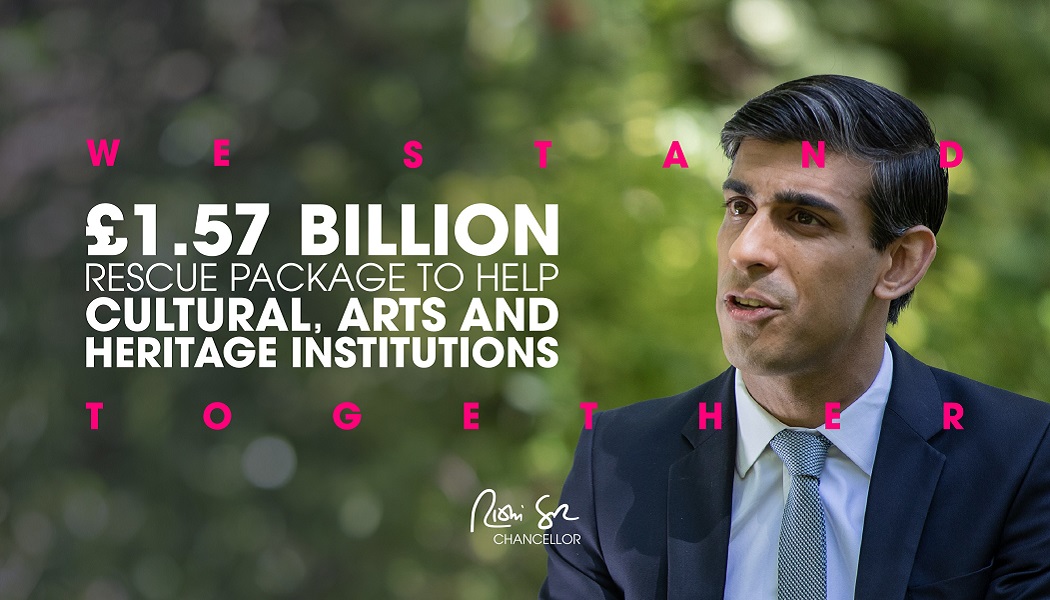 Relief has been the overwhelming response to the government announcing emergency access to grants and loans for the UK’s creative industries.

Several groups remain wary, however, and have vowed to scrutinise the government’s implementation of the headline-grabbing support package.

Late last night, chancellor Rishi Sunak announced a “world-leading £1.57 billion rescue package to help cultural, arts and heritage institutions weather the impact of coronavirus”. This follows weeks of campaigning from individuals and groups who have repeatedly urged the powers that be to save the nation’s cultural venues.

The support is designed to enable museums, heritage sites and galleries, along with thousands of theatres, live music venues and independent cinemas, to seek emergency grants and loans to keep them afloat.

Crucially, freelancers also get a mention in the government’s announcement. Specific funding to restart projects mothballed due to the crisis has been approved, with the goal of boosting employment prospects for permanent staff at risk of redundancy or freelancers who find themselves in perilous need of work.

Where will the money go?

The preliminary announcement divides the funding pot as follows:

Decisions on awards will be made in collaboration with organisations including Arts Council England, Historic England and National Lottery Heritage Fund

The £270 worth of repayable loans will be issued, the government states, on “generous terms tailored for cultural institutions to ensure they are affordable”. More details on what this actually means in practice will be confirmed when applications open in the coming weeks.

Neil Mendoza, recently appointed commissioner for cultural recovery and renewal, says the fiscal support unveiled is the result of “intense work over many weeks to create a vital and necessary national cultural stabilisation package for arts, music, heritage and museums”.

While the announcement of any support is an improvement on the outlook prior to the weekend, there remain voices in the sector who require convincing that this funding will be available quickly enough and where it is needed most.

Prospect, the union which represents many workers in the creative industries, is one such body. Mike Clancy, Prospect’s general secretary, says that while the government has finally decided to act, “the devil will be in the detail” regarding just how successful the new funding package proves.

“The government must start to pump money into organisations in the sector this week if we don’t want to see more job losses and employers folding,” he adds. “There can’t be any more foot dragging. Unions like ours still stand ready to work with government to get this right.”

Support for “forgotten freelancers” will also be vital to safeguarding the sector, according to Clancy.

Another union leader, Bectu’s Philippa Childs, states that while the funding package is “the first cautious step towards reviving the sector”, her organisation will be “scrutinising the details of this package to make sure it lives up to the real needs of our sector”.

Childs also echoes Clancy’s assertion that time is of the essence, urging “rapid action to stem the tide of redundancies and closures that are emerging in the sector”.

Counterculture, the arts management consultancy now led by former shadow culture secretary Tom Watson, is another organisation seeking to inject a dose of pragmatism into the debate. Senior partner at the firm, Tom Wilcox, says “the sector knows it has much to do to remain economically viable in the years ahead”.

Now, he adds, is the time to “seize the opportunity of this unprecedented financial package to make changes in its business models; investing more in digital tools to support income generation and marketing to broaden audiences, as well as creating better economies of scale through mergers, partnerships and shared services”.

“This is the moment to abandon much of yesterday’s organisational practice to maximise resources invested in producing and presenting great art,” he concludes.