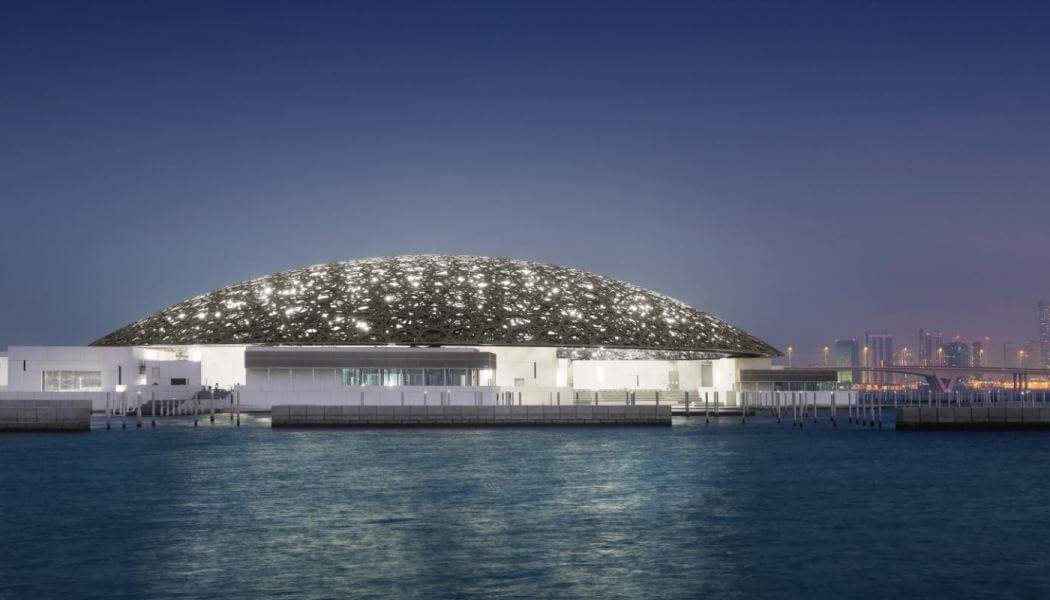 By Adrian Murphy. Main Image. The new Louvre Abu Dhabi, which opens to the public on 11 November, with the city skyline in the background. All photographs by Mohamed Somji
Share

In 2007 an intergovernmental agreement was made between Abu Dhabi and France that would pave the way for a new partnership with the Louvre in Paris to open a new museum with the ‘Louvre’ brand and tomorrow, ten years later, the Louvre Abu Dhabi will open its doors to the public

The Louvre Abu Dhabi sits in the new cultural quarter on Saadiyat Island in the UAE capital and has been designed by Pritzker-prize winning architect, Jean Nouvel, as a ‘museum city’ in the sea. It is to be followed by two new museums yet to be built, Zayed National Museum and Guggenheim Abu Dhabi, and is connected, in anticipation, to those plots by a 1km underground service tunnel.

It consists of 55 white buildings of which there are 23 permanent galleries in 12 sequences, a Children’s Museum, a temporary exhibition space, a 200-seat auditorium as well as a restaurant, café and retail outlets. The museum is covered by a 180-metre-wide, eight-layered latticework dome that protects the buildings from the heat of the sun and allows the sunlight to penetrate the galleries within. The architectural design has been overseen by Arteliers Jean Nouvel with structural engineers at BuroHappold and bespoke display cases by Meyvaert. 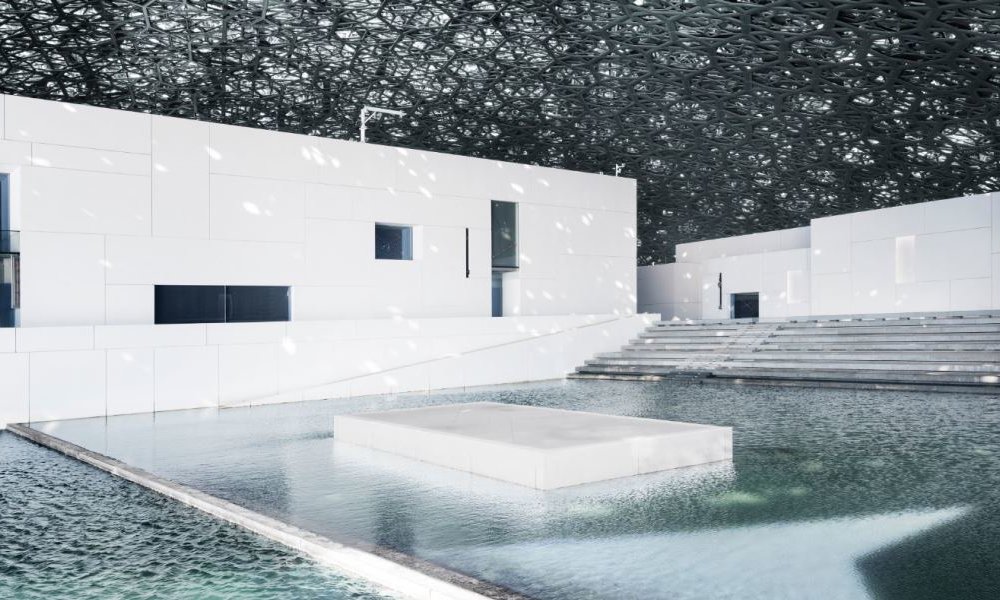 There are good reasons for building the Louvre Abu Dhabi, (not including Abu Dhabi’s vast oil and petrochemical wealth) and they stem from a booming population and tourism industry as well as the desire to quench the cultural appetite of a well-travelled, well-educated and creative young demographic.

The emirate of Abu Dhabi (which consists of the city of Abu Dhabi, Al Ain and the Al Gharbia region) has doubled its population since just before the Louvre agreement was made from 1,494,220 in 2006 to 2,908,173 in 2016 (according to the Statistic Center Abu Dhabi) of which roughly 80 per cent are expatriates.

This year the Abu Dhabi Tourism and Culture Authority, which oversees the Louvre Abu Dhabi project’s non-construction related activity such as acquisitions and visitor experience, forecast a ten per cent rise in hotel occupancy which equates to 4.9 million visitors.

In the past decade or so, Abu Dhabi has also seen the growth in new museums, galleries and art fairs from the Ghaf Gallery that opened 2006 and Abu Dhabi Art (2009), which is a four-day art fair that and attracts 20,000 visitors, to the Etihad Modern Art Gallery and N2N Gallery both opened in 2013.

But none of these are anywhere near the scale and ambition of Louvre Abu Dhabi. “To a significant degree the opening of Louvre Abu Dhabi will mark a seismic shift of the global museum network towards the south. No longer will the Northern Hemisphere dominate what of human heritage can be seen, researched and displayed,” says art collector and founder of the Barjeel Art Foundation, Sultan Al Qassemi, writing for Gulf News.

Al Qassemi says the Louvre Abu Dhabi is significant for a number of reasons: “At the outset, it is the very first universal museum in the Arab world, displaying an expansive array of human cultural production from Africa, to Asia, Europe and the Americas. This allows visitors to gain a better understanding of human creativity throughout the ages. Louvre Abu Dhabi will act as a conduit not only for the Middle East to learn from western best practices, but will also channel Middle Eastern and “global south” best practices and knowledge to the West. There are just as many lessons we can teach as there are to learn from the world, and that is the opportunity that Louvre Abu Dhabi will hopefully present.” 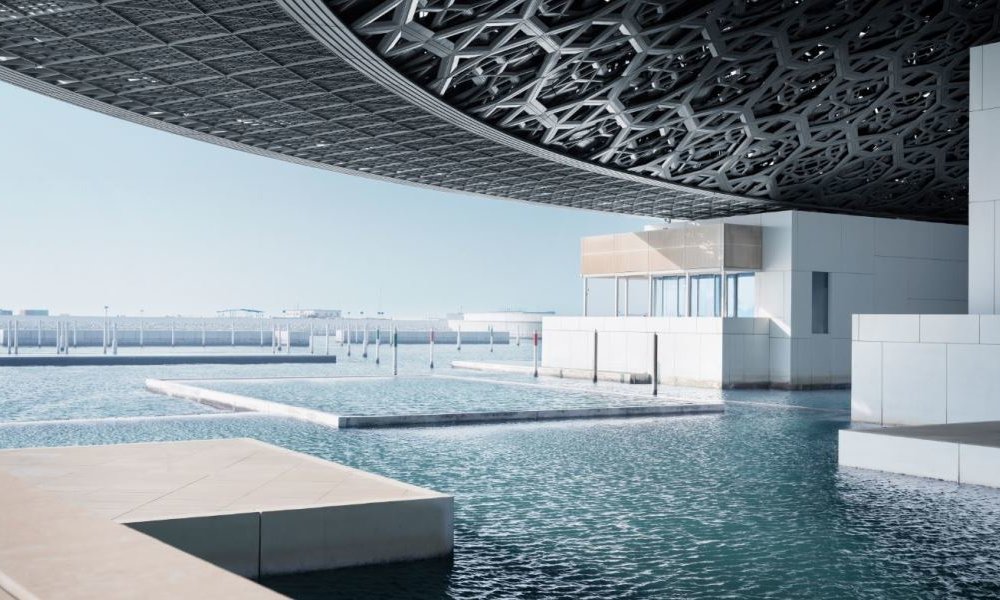 The Louvre Abu Dhabi showcases 600 artworks it has acquired, alongside 300 works on loan from 13 leading French institutions including works from Leonardo DaVinci, Vincent Van Gogh, Pablo Picasso and Cy Twombly. Permanent installations include a sculpture by Auguste Rodin, a statue of the Sphinx dating back to the 6th century BC, 13 fragments of a frieze from the Holy Quran and a marble bust of Alexander the Great.

However, with its aim to ‘share humanity’s universality’, Louvre Abu Dhabi has not been without its controversies as its record on workers’ rights has been criticised not least by the Gulf Labor Artist Coalition, which called into question the living conditions of labourers in overcrowded labour camps a, their constant monitoring and inability to move freely.

But this week Mohamed Khalifa Al Mubarak, chairman of Abu Dhabi’s Tourism & Culture Authority and of the master developer Tourism Development and Investment Company (TDIC), said the new museum would be a “hub of tolerance”.

Although that doesn’t help the thousands of labourers who helped build the museum it does bring the hope that Louvre Abu Dhabi can bring people together in a world of conflict and divisive politics.

Louvre Abu Dhabi will consist of: 23 permanent galleries in 12 sequences, a Children’s Museum, a temporary exhibition space, a 200-seat auditorium as well as a restaurant, café and retail outlets

There will be 600 artworks it has acquired displayed, alongside 300 works on loan from 13 leading French institutions