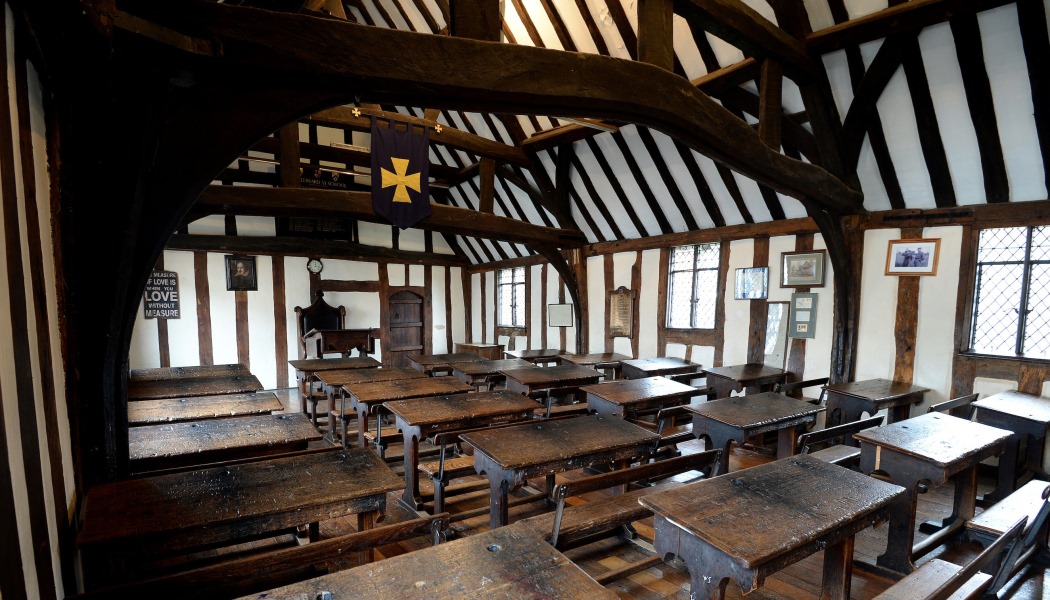 Shakespeare’s Schoolroom to open to the public for first time in April 2016 following £1.4m restoration

Work began on the Grade I listed building in July 2015 to repair the timber structure, upgrade the interior and conserve important historical elements, including a group of rare medieval paintings depicting the seal of the Guild of the Holy Cross. As part of the restoration the roof will have its modern tiles replaced with reclaimed handmade clay tiles, akin to those originally used.

As a visitor heritage attraction the schoolroom will be a place of international significance and will for the first time allow visitors to step into the shoes of where William Shakespeare was educated and had his first introduction to theatre.

Following its restoration, a new family heritage trail will be introduced to Stratford-upon-Avon in 2016, beginning at the Schoolroom. Writers and artists will also work with the local community on an exhibition inspired by the building and there are also plans for a programme of evening talks.

The new visitor experience will see interactive displays and films all set in the original Tudor classroom, with visitors able to explore the building’s role as a medieval provincial Guildhall, which was at the heart of Stratford-upon-Avon’s civic life for more than 400 years.

Part of the wider project will encompass arts activities, creative writing sessions and a ‘Willingly to School’ programme, enabling children to discover the routine of Shakespeare’s day and compare it with their own. The schoolroom will also continue to be used to teach students from King Edward VI School as it has done for centuries, maintaining its legacy as a place of learning and inspiration.

Vanessa Harbar, Head of the Heritage Lottery Fund West Midlands, says, “We are thrilled that, thanks to National Lottery players, we are able to support this wonderful project to be part of the 400th anniversary commemorations next year. It is wonderful that people and local students will have the chance to explore where Shakespeare spent his formative years, and get under the skin of the world’s greatest playwright”.

Located near to Shakespeare’s birthplace, the Schoolroom was built in the 1420s and is still part of the thriving King Edward VI School. It was attended by Shakespeare in the 1570s and is where, as the town’s only theatre space at that time, he would have encountered his first theatrical performances.