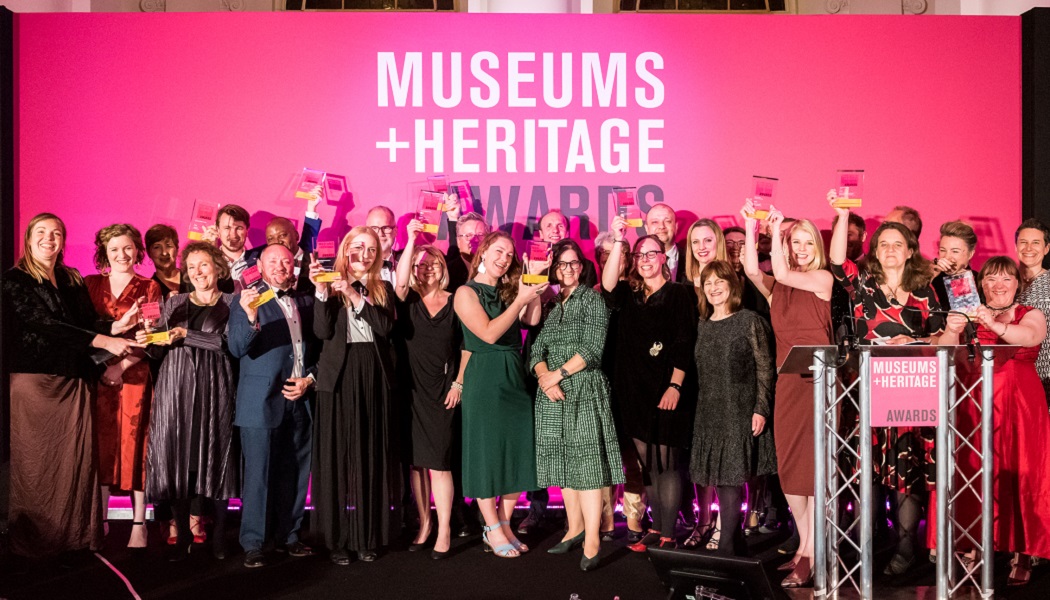 Image: The winners celebrate together at the 2019 M+H Awards
Share

The nominees across all categories for this year’s Museums + Heritage Awards have today been revealed, with those selected as winners discovering their fates in an online ceremony scheduled for September.

Having displayed excellence in one of 15 categories, 77 organisations from across the museums and heritage sectors have been shortlisted for recognition at the 2020 M+H Awards – sponsored by Chargeurs.

Shortlistees now have an anxious wait until the Awards ceremony on 22nd September, where they will discover if they have scooped the ultimate prize. This year, for the first time ever, the traditional glitzy London event will be replaced with an online version so that all nominees can be part of the festivities in a safe manner.

Given the tough few months endured by the entire sector, Anna Preedy, director of the Museums + Heritage Awards, hopes this year’s event can serve as a much-needed ray of optimism. “Each year the announcement of our shortlist is a real boon for the sector and so this year, more than ever before, I am looking forward to sharing this good news,” she states.

Preedy adds that the Awards will continue in their mission of “shining a spotlight on all of the hard work, creativity and determination that has always been so evident in our museums and heritage visitor attractions,” regardless of the circumstances.

Temporary or Touring Exhibition of the Year
Sponsored by Displayways

Permanent Exhibition of the Year

Partnership of the Year

Marketing + Communications Strategy of the Year

Limited Budget Project of the Year

Learning Programme of the Year

The International Project of the Year > £1m

The International Project of the Year < £1m

Innovation of the Year

Eagle-eyed readers will have noticed the presence of a new category in this year’s line-up, in the form of the new Sustainable Project of the Year, established in partnership with National Lottery Heritage Fund.

“As a first-time sponsor of these awards, we were delighted to see the enthusiasm of applicants to share their successes and learning for others to follow,” noted Drew Bennellick, head of land and nature policy at National Lottery Heritage Fund.

“The twin climate and ecological emergencies are prompting more organisations to rethink how they go about their daily business. So the more good practice and inspirational ideas that can be shared, then the greater the chance that we can reach that critical goal of net zero in the UK by 2050.”

This list had originally also included Bernard Donoghue, director of ALVA, and Stephen Duncan, commercial and tourism director at Historic Scotland, but the spike in their workloads due to the Covid-19 crisis meant both were unable to participate in this year’s deliberations.